For the third night in a row on Friday, protests against the election of Donald Trump continued in Dallas, TX. The event was organized by the Next Generation Action Network (NGAN) as a rebellion against minority rights being “put on the back burner for bigotry and hate.” Before the night’s events commenced  at Main Street Gardens, two or three counter-protestors stood in opposition to the growing crowd:

Once the rally began, leaders from NGAN spoke to the crowd and urged protestors to come up to the microphone and make their voices heard. Juxtaposed against the cheery Christmas decorations of Main Street Gardens, a wide range of voices joined together to share in post-election pain. We heard from seasoned Latinx, Black, LGBT, Communist, and Native activists, as well as high school students who shared their fears about coming of age in Donald Trump’s America:

As with any community event, it’s unlikely that all protestors saw eye to eye on the issues. I’d imagine the Communist activist who spoke was as “rah rah” excited about Hillary Clinton as the high schoolers who spoke. But they were united in one thing: their fear and rejection of President-Elect Donald Trump:

After the speeches, the crowd moved to the streets to voice that rejection. We marched from the Gardens, through Downtown Dallas (where just a few months earlier, protestors and police were shot at during another NGAN protest), near Dealey Plaza where JFK was assassinated, past American Airlines Center, and through some of Dallas’ more affluent and gentrified locations.

Throughout the night, protests remained energetic, but mostly peaceful. Onlookers took video on their phones, and many stopped their cars to high five, congratulate, and thank demonstrators. A few antagonistic Trump fans stopped to heckle, but were quickly drowned out by the chants of marchers.

While the previous nights of protests had seen several arrests, there were none made Friday night. There was one property damage incident, involving a Hooters Window that was broken by someone in the march. The suspect of the incident has not been identified, and it’s unknown whether they were an Anti-Trump protestor or counter-protestor. Regardless of who was at fault, NGAN took swift action in resolving the issue with Hooters by paying them to fix the property damage.

Overall, the night was a successful and peaceful show of solidarity, and I encourage all of you to find protests and community organization events in your area. There is no better time than now to get involved, especially if you operate from a place of privilege. You can meet up with a local chapter of the Democratic Socialists of America, donate to the ACLU, or contact local marginalized communities (such as mosques, LGBT youth centers, or reproductive rights orgs) to see how you can get involved. We may not all agree on all philosophical points, but we must agree that Hate Ain’t Great. 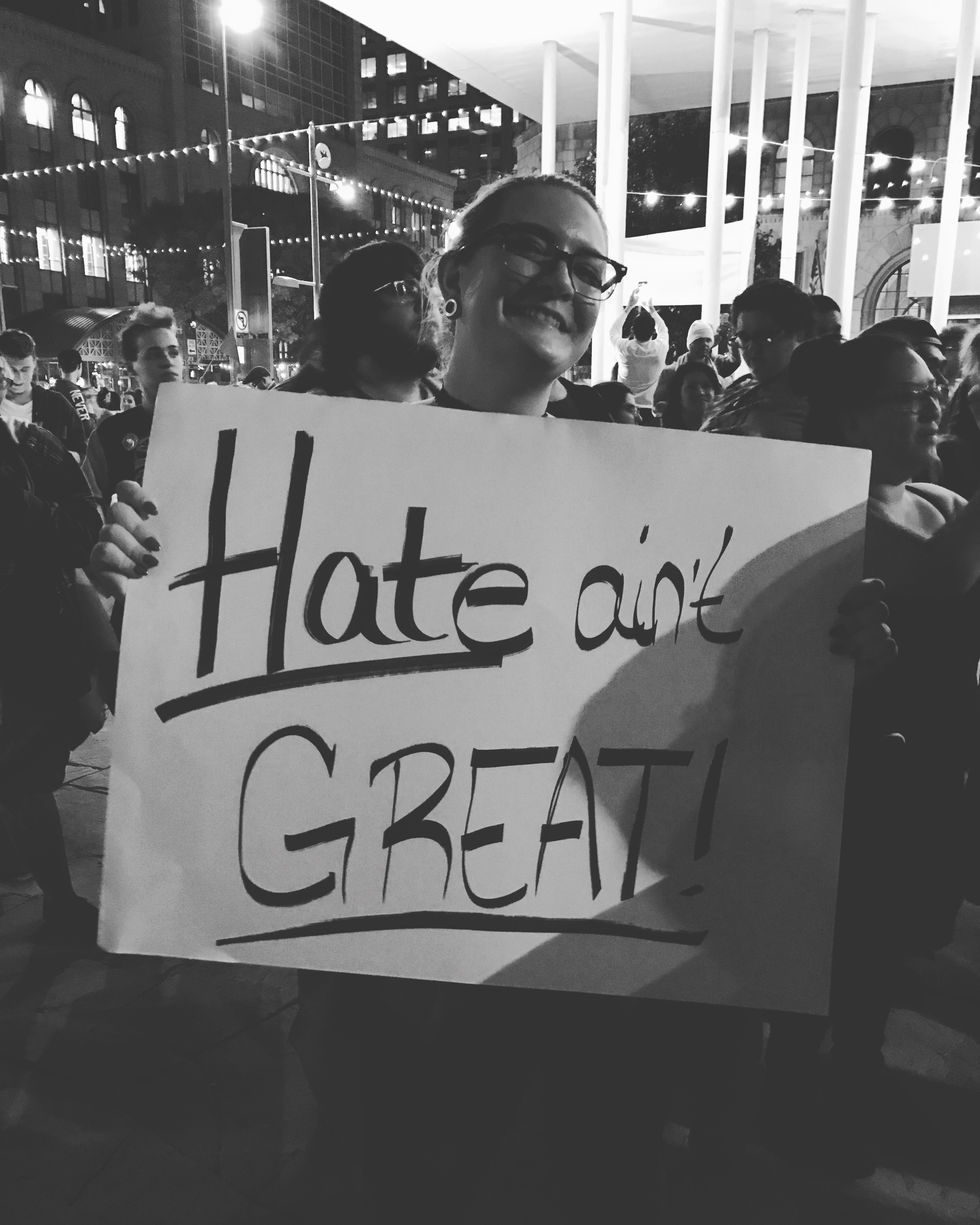