SkepchickCON at CONvergence is one of the best Skepchick events of the year. It has got science and geekiness and alcohol, so it’s basically the best thing ever. My personal favorite part this year was the fantastic cosplay by our own Skepchick network contributors.

Most of you probably weren’t able to attend SkepchickCON this year and it would be sad if that meant you had to miss out on all the awesomeness of the Skepchick cosplayers. I lugged my giant camera around all weekend in order to capture as many of the great Skepchick costumes as I could so that you could all share on a piece of the awesomeness that was SkepchickCON.

Without further ado, I bring you our very own Amy as Louise Belcher from Bob’s Burgers and Mad Art Lab’s Anne as the badass Fionna from Adventure Time. 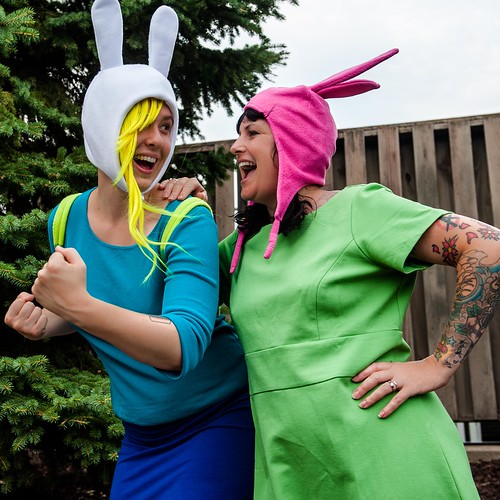 If we’re doing badass women, we can’t forget our own Skepchick Heina as ex- Roxie from Scott Pilgrim. 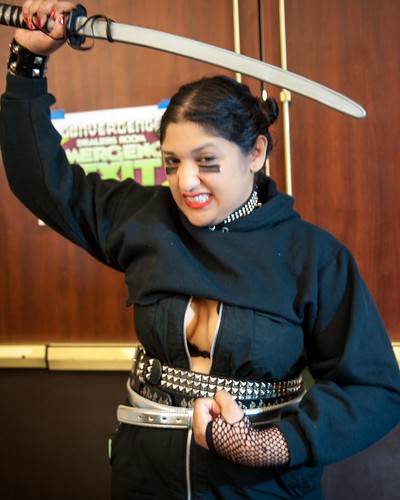 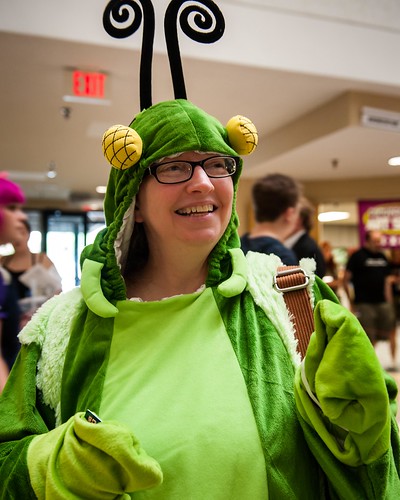 Skepchick Nicole cosplayed as a belly dancer, except she actually is a belly dancer so it’s less cosplay and more just Nicole being her awesome self. Here she is with Mad Art Lab‘s Ashley and Ryan showing off their bellies. 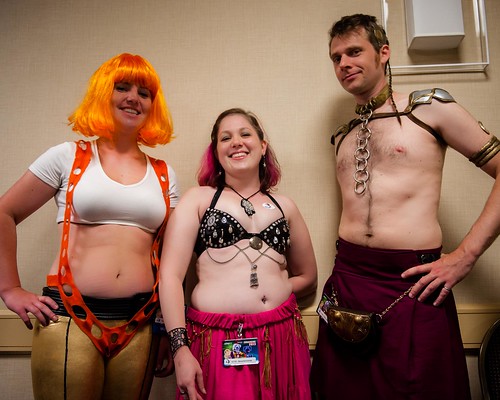 Speaking of Ashley, she made a great Leeloo from the Fifth Element. 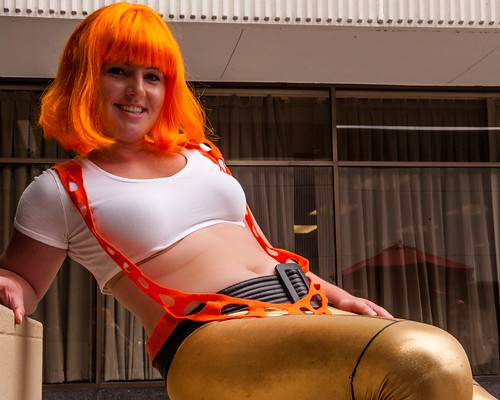 Katie from Mad Art Lab gave us her best Zuul from Ghostbusters. 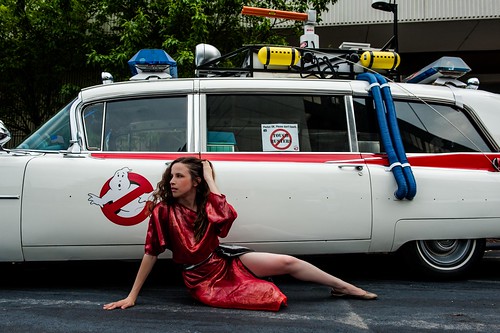 Don’t worry though! The Keymaster found her! 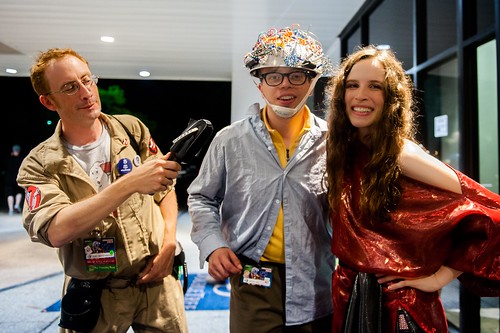 Our master of disguises Emily from Mad Art Lab had a bunch of costumes she wore over the weekend. Here she is in full-on steam punk and the greatest boots ever. 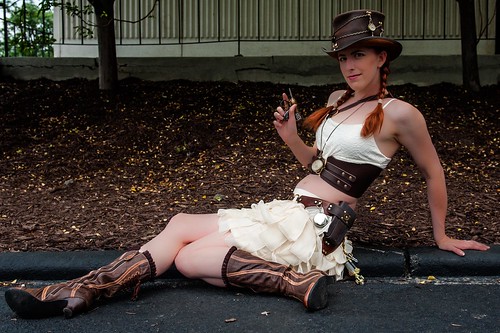 Here is Emily again in another pair of badass boots as she explores a mysterious alien planet in her Star Trek cosplay or possibly a specific character. I don’t actually know because I’ve never seen Star Trek. PLEASE DON’T KICK ME OFF SKEPCHICK FOR THIS MORAL FAILING! 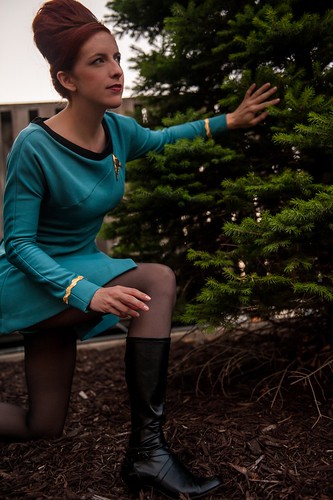 Did I say mysterious alien planet? River Song must be nearby! 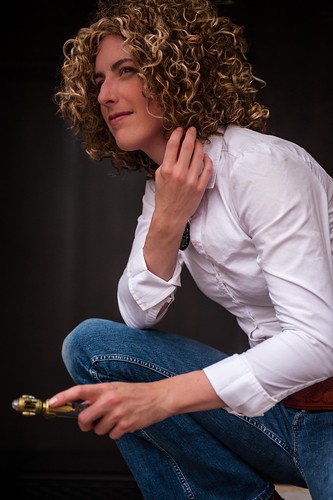 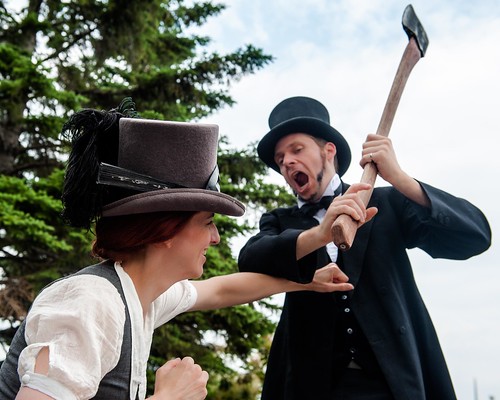 Speaking of Ryan, when he wasn’t being a Canadian Lincoln, he was doing his now-famous Slave Leo cosplay. 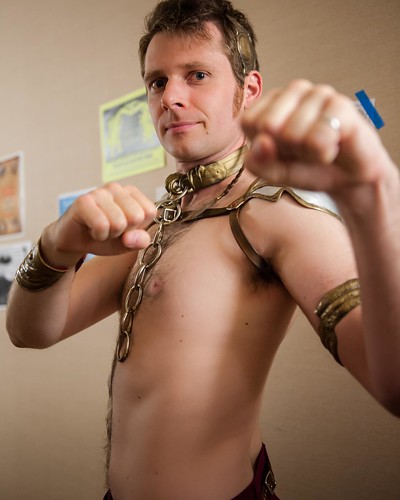 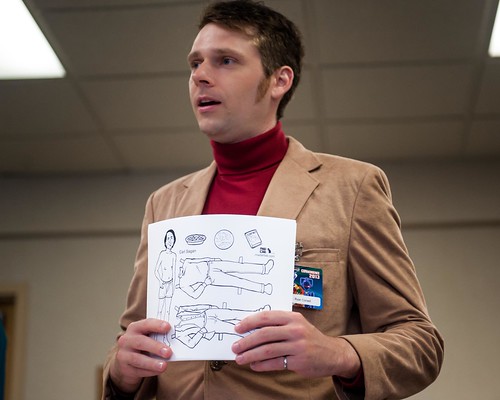 Or he and Ashley were taking a break from fighting Daleks to pose in front of their Tardis. 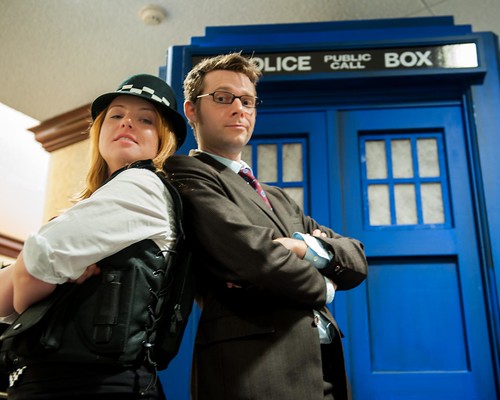 Oh no!! Ashley and Ryan are attacked by weeping angels. DON’T BLINK!!! 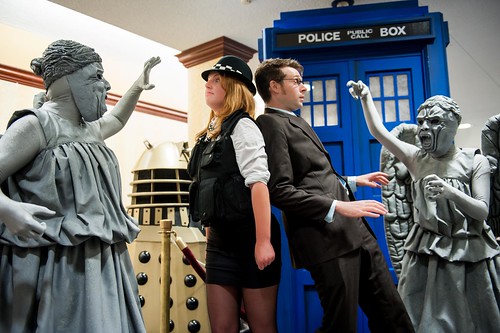 Lastly, our fearless leader Rebecca cosplayed the alien abortion scene from Prometheus. Here she is coddling her squid fetus. 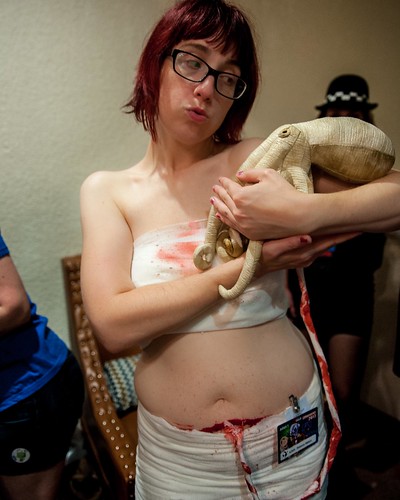 And one more to really get the horrificness of the costume across. 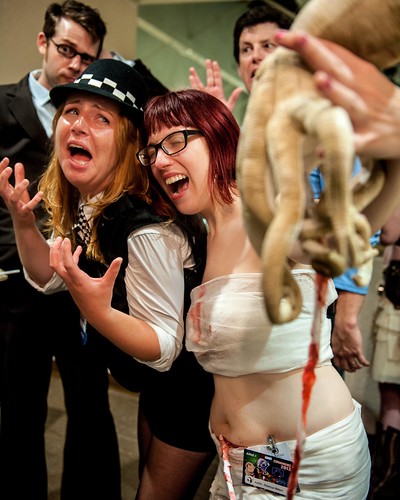 At this point you’re probably saying to your computer screen “But Jamie, where is your costume?” The answer is that I was super boring and didn’t wear one. Or maybe I did but you’ll never know because no one ever gets photos of the photographer. This year was inspiring though and I’ve already started working on my SkepchickCON 2014 cosplay.

If you want to see more photos from SkepchickCON I’ve got over 140 of them in this Flickr album.

All photos by Jamie Bernstein.