My mother just called and asked what I’m doing tomorrow. I said, “Wednesday? I’m prepping for SkepchickCON! I fly out Thursday for Minneapolis. I’m so excited!” She pointed out that it’s the 4th of July. “The fourth of whatnow?” WHO CARES, because I’m on my way to four days of learning, conversing, and partying with some of the best people in the world at CONvergence, where the Skepchick Track is one of the most popular shows at the con! Here’s our schedule so you can be sure to catch us!

The CONvergence schedule has a cool feature where you can sign in to Facebook and add a panel to your schedule, and so you can also see how popular a panel might be. With that in mind, many the Skepchick panels already have 100 or more people scheduled to show up for our 200-seat room (it’s bigger this year because we packed it so tightly last year). Please try to arrive early to be sure you get a seat! Also note that most panels are in Bloomington, but some are in other locations. Don’t forget to read our anti-harassment policy here. 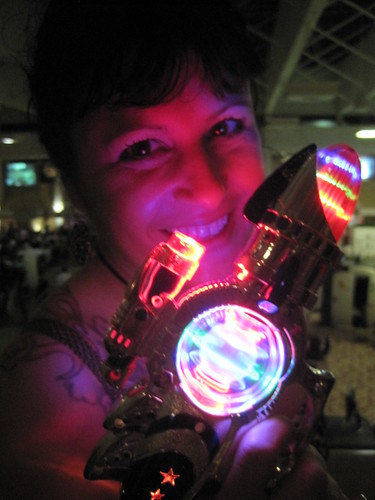 Skepchicks Save the Day AND Your Money
Thursday July 5, 2012 3:30pm – 4:30pm @ Bloomington
The panel will expose a variety of pseudosciences of the beauty industry and other products targeted at women. From Super-Juice to balance bracelets, find out which products are a scam and which are worth your hard earned cash. Panelists: Heina Dadabhoy, Maria Walters, Ashley Hamer, Rebecca Watson, Amy Davis Roth, Felicia Gilljam

SKEPCHICK & FREETHOUGHT BLOGS PARTY ROOMS OPEN
Rooms: 227 & 228
Thursday: 08:00pm – 01:00am
The party rooms open and the Buzzed Aldrins start flowing! Plus, our resident mixologist Anne Sauer will be creating a few new concoctions. You must have ID to be served alcohol!

Battle of the Beaks (**Great For Kids!**)
Friday July 6, 2012 9:30am – 10:30am @ Connie’s Quantum Sandbox
Pretend you are a hungry bird and use different “beaks” to compete for food. Which birds will have the adaptive advantage and get the most food? What might happen if the environment changes?
Camp Quest Sponsored Activity.

I Am Geek, Therefore I Draw
Friday July 6, 2012 11:00am – 12:00pm @ Atrium 2
A panel of artists who create art inspired by geek culture. Why it inspires them and why they feel it is as important as traditional art. Panelists: Damian Sheridan, Ashley Hamer, Emily Finke, Amy Davis Roth

Don’t Feed the Trolls
Friday July 6, 2012 2:00pm – 3:00pm @ Atrium 4
Sexism, misogyny & the internet. A discussion about the recent wave of internet bullying against women and what we can do about it. Panelists: Heina Dadabhoy, Greg Laden, Stephanie Zvan, Jason Thibeault, Rebecca Watson 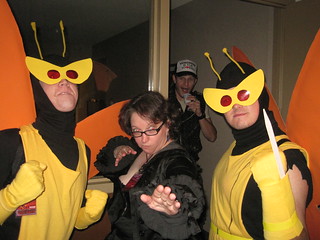 SKEPCHICK & FREETHOUGHT BLOGS PARTY ROOMS OPEN
Rooms: 227 & 228
Friday: 08:00pm – 01:00am
The party rooms open and the Buzzed Aldrins start flowing! Plus, our resident mixologist Anne Sauer will be creating a few new concoctions. You must have ID to be served alcohol! 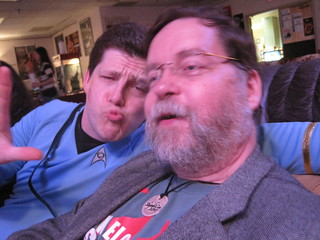 Evolution of the Female Orgasm
Friday July 6, 2012 10:00pm – 11:00pm @ Edina
A hot topic; there is no evidence of selection for orgasm in women but rather, it seems to be a side effect of selection for the male orgasm. Some people argue there must be some adaptive purpose. Panelists: Greg Laden, PZ Myers, Heina Dadabhoy, Rebecca Watson, Craig A. Finseth

Alien Evolution
Saturday July 7, 2012 9:30am – 10:30am @ Atrium 6
What does the history of life on Earth tell us about what we might expect about life on other planets? Is it reasonable to expect to find humanoids on other worlds? Panelists: Greg Laden, PZ Myers, Bug Girl, Emily Finke, Lori Fischer

Mutants! (Note: same time as Physics of Super Fashion so you’re gonna have to flip a coin!)
Saturday July 7, 2012 11:00am – 12:00pm @ Bloomington
We’re all mutants. Here’s how we know and the truth about what mutations actually do. Panelists: PZ Myers, Bug Girl, Greg Laden, Lori Fischer 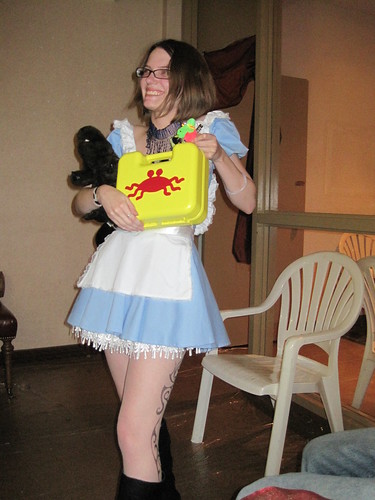 SKEPCHICK & FREETHOUGHT BLOGS PARTY ROOMS OPEN
Rooms: 227 & 228
Saturday: 08:00pm – 01:00am
The party rooms open and the Buzzed Aldrins start flowing! Plus, our resident mixologist Anne Sauer will be creating a few new concoctions. You must have ID to be served alcohol!

Invisible Superheroes
Sunday July 8, 2012 9:30am – 10:30am @ Bloomington
We know you’ve heard of Marie Curie. Who else? Women in science who made amazing strides but were forgotten by history. Panelists: Laura Okagaki, Rebecca Watson, PZ Myers

Vive le Difference
Sunday July 8, 2012 2:00pm – 3:00pm @ Bloomington
Boys like trucks, girls like dolls. Or do they? What are the real differences between men and women (other than the obvious physical ones)? How much is cultural, how much is a consequence of real biological differences? Panelists: Stephanie Zvan, Rebecca Watson, Greg Laden, Craig A. Finseth

EDIT: Nearly forgot to say, thanks so much to Kammy Lyon for doing basically all the work setting this up. She’s incredible!

Featured image shows Jesus downing a Buzzed Aldrin at a SkepchickCON past.