That is not a euphemism. This is actually about cleaning penguins.  Or, more specifically, cleaning oil off of penguins after an oil spill.

My perspective on animal rehabilitation has changed a lot in the last 4 years. For much of that time I was the manager of a Bird Sanctuary, and involved with rehabilitation of injured birds and animals. I also was involved in turtle triage during the cleanup of the 2010 Michigan Oil Spill.

In the New Zealand spill, the birds that have been harmed are Little Blue Penguins. They are….well, adorable.  The article I linked to above describes in detail the laborious steps of getting thick oil off an active little bird:

“…the fuel oil that’s spilled from the Rena is really thick, so we first rinse the birds with canola oil, sold as cooking oil at the supermarket. This helps soften the fuel oil and get off the really thick stuff.

Then the penguin is washed multiple times in 25L basins of warm water – about 41C, to match the bird’s body temperature – with 100ml of dishwashing detergent in each basin. We use specially imported dishwashing liquid that’s the best for the job.

We change water four or five times. One vet holds the bird, while the other scrubs it. We have toothbrushes for the delicate bits.   Once the oil is gone, the bird gets a final rinse in warm water only, and is then checked for any missed spots, and the detergent is washed off.

It takes about 45 minutes to an hour for each bird to be washed….During my shift – we’re only allowed to work eight hours – I helped clean three penguins.”

Then the penguins have to be dried, fed, and placed in care  until they are well enough to be released.  This is a lot of work, and it’s mostly done by volunteers, FSM love ’em.

My work with wildlife rehab after the Michigan oil spill was mostly centered around turtles.  During the peak of the spill, field teams recovered 70+ turtles coated in heavy crude every day.  It took 2-3 hours to clean ONE medium-sized turtle (about the size of my hand). 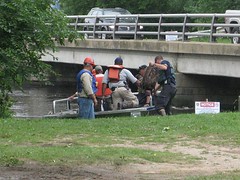 The thing that makes all of this just that much more difficult is that the oil itself is toxic waste. Anything that comes in contact with the oil–including soapy water and dishrags– has to be disposed of as hazardous waste.  The oil in Michigan had a lot of benzene, a known carcinogen; the New Zealand oil is heavy crude, which has similar toxicity.   So before anyone can touch a bird or a turtle, they have to learn about how to safely deal with toxic waste, the risks they are exposing themselves (and their gonads) to, and sign a lot of paperwork.

One of the biggest challenges we faced with the Michigan spill was controlling well-meaning people that wanted to pick up injured wildlife–including big birds like herons and geese–and “help” them without any training.  Not only is touching wildlife without the proper permits or training illegal, it’s bloody dangerous.  You might be surprised at just how aggressive a scared, injured bird can be. Or a muskrat.

This makes authorities look like heartless bastards when they tell people to let birds coated with oil stay put until a retrieval team can get to them. People see the oil-covered animals. They look horrible and unhappy. But wading into a toxic waste site to “save” the birds is risky for both people and animals.  And once you have the toxic sludge on you, then you are a source of contamination.

It’s a bad situation all around.

And, as I mentioned above, it is incredibly time and labor intensive to clean contaminated animals up.
As adorable as the little turtles were, I left them for last to clean.  The hard reality is that most baby turtles die, with or without an oil spill.  I  focused on the big (>8cm)  turtles, since they were reproductive age, and had the best chance of both surviving the stress of the cleaning and producing offspring the next year to re-stock the river.

Every night I worked at the cleanup, I came home and cried.

A lot of birds came in for rehab; the majority of them were Canada Geese, but also some herons and a kingfisher. I was a little conflicted about saving all the Canada Geese. Birds are pretty high stress animals; and frankly, it’s not like the Midwest is running short of geese.  Why not just euthanize the geese, rather than start a traumatic rehabilitation process? Why not take that volunteer time and effort and put it to use on other, less common animals? Or un-charismatic fauna, like snapping turtles?

Neither Canada geese or Little Blue Penguins have an endangered conservation status–they are both species that are doing well.  But….it’s easier for me to want to save the penguins, partly because they are adorable.

AI: Should it make a difference? Should cleanup efforts be prioritized with the knowledge that we can’t save everything? Or do we have an ethical duty to make right what humans have harmed?  Should animals be euthanized rather than undergo the trauma of rehabilitation? Which ones?