I know this has little to do with science or skepticism or feminism or whatever but I DO NOT CARE because I’m sick and tired of reading about this guy who claims he invented fried beer and ooooh look at him isn’t he special?

NO. He is not special. I did it first. And unlike Mark Zable, I will share my awesome recipe for fried beer so you can enjoy it at home.

In 2007, I hosted FryDay, a party in which my friends brought any food they wanted and we threw it into a deep fryer to see what happened. We fried PopTarts, fruits, candy bars, gummi worms and more.

OH AND ALSO WE FRIED BEER.

It was so successful I hosted a second one, and once again, we fried beer. Beer! It’s delicious. Here’s what you need to do to enjoy your own fried beer: 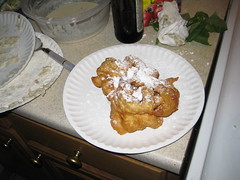 1. Mix equal parts beer and flour (you probably don’t need more than a bottle of beer). Add the baking powder, a bit of salt and a spoonful of cinnamon. Mix it all up and pour into a Ziplock bag.
2. Throw the Ziplock bag in the fridge for a few hours.
3. Dump equal parts beer and sugar into a small saucepan and put it over high heat to reduce it into a syrup.
4. Grab the bag out of the fridge and unzip it a tiny bit. This allows you to squeeze the batter into the hot oil of your deep fryer, making a funnel cake.
5. Let the batter brown a bit in the oil.
6. Pull that mofo out and pour some syrup over the top. Dust with powdered sugar.
7. NOM NOM NOM
8. Add beer syrup to EVERYTHING because it’s delicious.

Okay? That’s it. Mark Zable spent three years on his recipe and he won’t let you have it. I came up with this in 10 minutes and I’m sharing it with the world and it’s amazing.