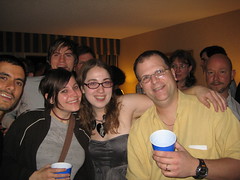 I’m writing this from the Fort Lauderdale airport (go free wi-fi yay).* I should be on my plane right now, but the flight has been “slightly delayed” by an hour thanks to wind and snow in Boston. Yep, I’m leaving a mini-paradise of warm, sunny weather to go back to the horrid frozen tundra of Boston. I didn’t realize how depressed the winter was making me until I landed here and immediately started smiling ear to ear. Now, I haven’t even left yet and I’m already depressed again. Blah.

It’s not just the weather, of course, it’s also the depression of leaving behind about 200 mega-cool people. The conference was great, and we ended it with a bang. But, first things first. 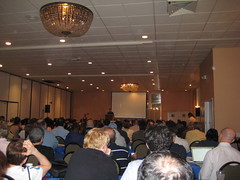 Saturday’s lectures were incredibly inspiring and well-delivered. The day started with Kelly Jolkowski, founder of Project Jason. Kelly told her story of losing her son, helping the parents of other missing children, and then taking on the psychic fakers who prey upon these people. It was a sad tale that really shows what an incredible woman she is to be so strong in the face of tragedy. 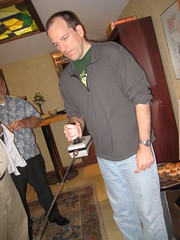 Next up was Mark Roberts, also known as Gravy on the JREF forums. For the past two years, Mark has tirelessly fought the conspiracy theorists who believe the World Trade Center was destroyed by the American government. His ability to handle that insanity is nearly supernatural. I think a lot of people (myself included) were expecting a very sober overview of what really happened on September 11, but we got a wonderfully funny and interactive presentation that illustrated some of the most common crazy accusations made by the “Truth Movement.” It was probably my favorite of the day, if I had to choose.

Brian Dunning, Bart Farkas, Michael Stackpole, and I then sat on a panel to talk about podcasting. I think it went well, though it was a little tough at first because we had no moderator.

I went on after the morning break and gave a talk about Curiosity, Aroused, and in particular about how the community of skeptics helped make it a success. It was a lot of fun for me, and hopefully for the audience as well. Amazingly, all the video and audio clips played (nearly) perfectly, and Brian Dunning was kind enough to lend me a remote so I could move more smoothly through the slides. When I was finished I had a few minutes left for questions, and I got some of the best questions ever! My friend Graydon suggested a great new t-shirt you might see pop up in the Skepchick store, and another woman asked if she could send her local NPR station a $30 check earmarked for licensing of my show. Brilliant!

Following me was the famed and justly popular Robert Lancaster of Stop Sylvia. Like his paper presentation on Stop Kaz back during TAM4, Robert was funny, informative, and inspiring to the max. He announced that in the near future, he’ll also be Stop-ping John Edward and a number of other charlatans. Sweet!

We were supposed to witness a real life million dollar challenge after lunch, but sadly the claimant didn’t show. Chris Cordero had previously promised to be there to show his ability to psychically transmit information to a volunteer, but the night before he let the JREF know that he’d be unable to show up because “he has bills to pay.” Sorry, what? How many bills can a million dollars pay? Anyway, instead of the challenge, Randi took the stage to do an hour of chatting about past challenge applicants. 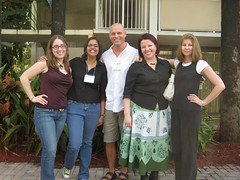 We heard a great talk from Michael Stackpole, author of The Pulling Report and lots of sci-fi books. I had never met Michael before, and was happy to find out first-hand how clever and on-point he was. His talk gave some very good advice for dealing with believers, particularly in debates — how to influence people, to help them see your point, and even how to pull a few dirty tricks during debates.

I just realized I’m getting these out of order, but, um, oh well. Randi went back on stage to talk about Uri Geller and what an idiot he is. It was fun, and we got a glimpse at a Korean TV show that caught Uri cheating recently.
Finally, I was on one last panel with all the speakers plus Martin of Aardvarchaeology. Iâ€™m so happy I got a chance to talk with Martin â€“ heâ€™s just as smart and funny as you probably suspect if youâ€™ve read his blog (which you should). I see heâ€™s posted a photo of us over there! Aw, aren’t we adorable.

After the talks, fellow Skepchick blogger MasalaSkeptic and I went to check out our suite for the party that night. I thought it was perfect — a bit secluded, not bordering any other rooms, big kitchen, bath, living room, and a kind of small bedroom. Overall, smaller than what we had in Vegas for the TAM5 party, but I figured this was a smaller conference and so the party would probably not top 35 people or so.

Volunteers came by with snacks and drinks, and we got it all set up nicely. I handed out keys to guys who would be able to be there at 9pm to start the party while Masala and I were at dinner with Randi. That was planned for 7-9pm, and it was held about 20 minutes away from the hotel, at Rich’s place (he helps the JREF with video editing and we got to hang out a lot on the Alaska cruise).

The dinner was wonderful: the food delicious, the company fantastic, the setting beautiful, the drinks free. At 9, we started back to the hotel. I got a voicemail from Sam, telling me that the suite was immediately packed and people were already spilling out into the hallway. Uh oh. 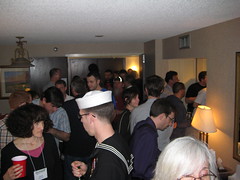 I arrived at the party around 9:30pm, and despite my mild concern that we were going to get busted very very soon, I was ecstatic to see so many people drinking and laughing and having a fantastic time. Someone brought corn dogs, the balcony was in use but not collapsing, the kitchen was full of fine whiskey, music was playing, and it looked as though all the speakers (except Randi of course) managed to stop by. 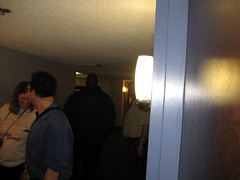 Hotel security showed up some time after 11pm and asked us to get the people out of the hallway and keep it down. I got a photo of a shadowy guard lurching away. The dude was huge and scary (see at left). Shortly after midnight, the police showed up (for the first time in the history of the hotel, according to the front desk clerk). They said they heard the party while pulling into the parking lot, and suggested we shut it all down pronto. 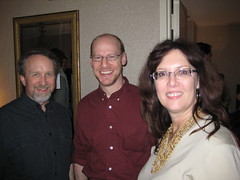 As usual, everyone was great about clearing out, and a number of people stuck around and cleaned up. Everyone kept asking me where they should move the party, so I suggested they go back to the other hotel and hang out around the pool. After we cleaned up the room, thatâ€™s where we all headed, and sure enough there were still a few dozen people hanging out finishing off the party supplies.

Thatâ€™s where we stayed for the next four hours or so, drinking and talking and at one point (as Stacey mentioned) jumping into the pool with our clothes on. 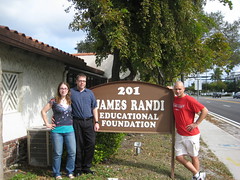 Around 11am I woke up in bed still wearing the same dress. After changing and packing, a few of us carpooled over to the JREF where we completed our skeptical pilgrimage. After a late lunch/dinner of pizza, A was kind enough to drop me off at the airport so I could get back to reality. Ugh.

Overall, TAM 5.5 was a huge success and Iâ€™m so happy I was able to go and participate. It got me even more excited about TAM 6, coming up in June and held in good olâ€™ Vegas. Hopefully, our coverage of 5.5 here on Skepchick has convinced a few more of you to sign up for TAM. As soon as registration is open, weâ€™ll let you know!

*(written then, posted now that I’m back in Boston so I could include pics!)Â