I am excited to report that the FTC has begun to take action against some of the bogus products for sale claiming to protect you against bed bugs:

“The Federal Trade Commission filed deceptive advertising charges against two marketers of remedies for bed bug infestations, who allegedly failed to back up overhyped claims that they could prevent and eliminate infestations using natural ingredients, such as cinnamon and cedar oil.”

I’ve seen ads for these products all over the place, and many more are offered in stores.   I hope that the FTC will expand their actions to some additional questionable bed bug products.  This comes on the heels of some new research that found that over-the-counter insecticide foggers are not effective for bed bug control.

Bed bugs are fertile ground for hucksters in the same way that many serious medical conditions invite exploitation of the ill. Both topics involve a lot of anxiety and stress, don’t have easy solutions, and people are willing to pay lots of money to find a solution.

It’s probably not a coincidence that I got the tip off on the FDA action from What’s the Harm, the site that monitors people physically harmed by bogus remedies.  In both unproven cancer treatments and over-use of insecticides to control bed bugs, people can make poor decisions based on bad or incorrect information.  Unfortunately, both also can create cases in which people sometimes end up dead. 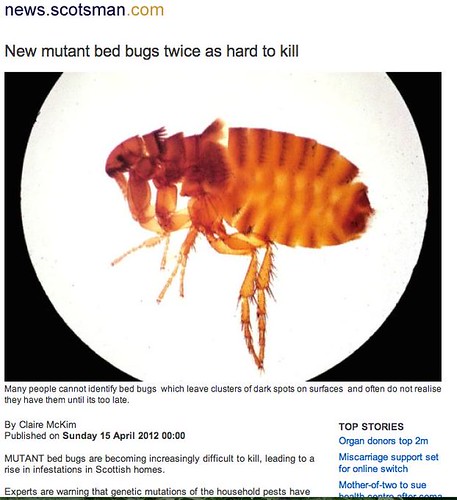 There is an amazing amount of misinformation about bed bugs out there. I’ve called out both advertisers and media for some fairly spectacular Taxonomy FAILs.

This news photo, for example, has the caption “Many people cannot identify bed bugs.” Gee, you think that might be because your news article includes a photo of a flea, which isn’t even a close relative of a bed bug?

I’m trying to stay focused on the positive.