Entomology has a unique advantage over other sciences.   Physicists like to boast about their giant Hadron, but they needed the help of large federal programs to get it up.

Entomologists know that it’s not all about size.  We are skilled at building our own equipment, cobbling together spare parts for unique uses, innovating with common household objects, and sometimes—we even produce our own raw materials for research.

Why yes, I am talking about poo. 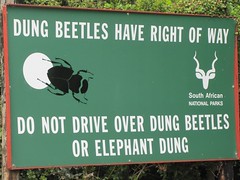 Dung is incredibly nutrient rich, and a whole host of insects specialize as shit eaters. (The fancy name for that is coprophagy, by the way.  You should probably consider it a deal-breaker if it occurs on a dating profile.)

Eating poop is an important ecosystem service that insects provide.  Without a full and active fauna of crap eaters, nutrients would be tied up in little stinky piles all over the place (which we would then step in and cuss about).

The nutrient cycling and soil enrichment activities of insects are critical to a healthy ecosystem.  They even help with seed dispersal for those little bits that pass through relatively unchanged. You know what I’m talking about.

It’s important that we know what eats poop so that we can manage ecosystems to preserve those animals.   A whole host of entomologists study insects that are attracted to feces. To keep with our earlier physics reference, perhaps you could say they work on the Ploppler shift.  Or, It’s not just a job, it’s a doody.

Ahem. Anyway.
You can read about the adventures of some field entomologists in Peru studying dung beetles in a delightful post titled “Peru Scarab Blog: It’s Poo-fectly Normal.”  A brief excerpt:

“one by one, we would discreetly excuse ourselves and head off to our respective receptacles and ‘make bait’. ….collecting methods I’m sure varied, and I never did go as far to ask any of my colleagues exactly how they ‘captured’ their bait.

I for one was armed with old pairs of 60 denier tights with various holes and ladders rendering them no longer fit for their original purpose, but, they make excellent ‘bait’ receptacles, being porous they effectively let out the enticing odour to lure the unsuspecting beetle to its scientific end.

As you can imagine, stock-piling poo for bait is not a particularly social occupation. I am happy to say that none of us were anti-social enough to keep it in our rooms or even the shared bathroom, but we did on one occasion try to keep it in the fridge… along with the coke (for energy), water (for hydration) and rum (requires no explanation), oh, and a few overly excited insects that needed calming down a bit before a photo shoot. But we soon realised that this was in fact anti-social so we took to keeping our bait outside our front door in sealed pots in zip-lock bags.”

Check out their post for further details of a mysterious (and hilarious) poop theft.

In agriculture, poop is produced in mass quantities.  A single cow can drop 20 cowpies a day.  A herd of 2500 cattle can produce an estimated 6.7 million pounds of manure per year.  It has to go somewhere, and the best place for it is back into the soil.

A recent paper looked at the preferences of dung beetles–do beetles prefer certain scat over others?  This is important to know, because as more exotic species are introduced into US cattle country, it would be a problem if dung beetles decided they didn’t like cow meadow muffins anymore.  The researchers compared omnivore, herbivore, and carnivore dung to look at how attractive it was to dung beetles, and also looked at species differences.

A helpful zoo provided the researchers with the means to offer up Zebra, Tiger, Chimpanzee, and Waterbuck flop to the discriminating palates of Nebraskan beetles.  They also used dung of an additional hominid species in their experiments: Homo sapiens.  The source of their human dung remains shrouded in mystery.

I suspect that in the grand tradition of “using local materials” the authors may have contributed to the project themselves.  I know one of the authors on the project, but I really couldn’t think of a diplomatic way to email him (after a silence of almost a year) and ask if he was crapping in a bucket.  I also kind of don’t want to know that about him, anyway, so let’s move along to the research results.

Bison are a native North American species that the beetles co-evolved with, so I expected that familiarity would make bison biscuits a preferred food. I was wrong. Dung from native bison were actually the least preferred of all the species tested!

Omnivore dung and carnivore dung were highly preferred, possibly because their feces provide a diet rich in Nitrogen and Phosphorous.  Herbivores can produce nutrient-poor feces with a lot of undigested plant matter, which is a bit harder to live on as a meal.   And this was how it was discovered that Chimpanzee and human turds are the most attractive types of turd for dung eaters of the midwest.

Now you know the scoop on poop.

Thanks to Arno & Louise for the dung beetle photo!