A lot of atheists who were once religious talk about their de-conversion as a metaphorical opening of their own eyes. Of course, those who find religion often feel the same way: “I once was blind but now I see.” This is an obvious way of describing what happens when you have a sudden realization that changes your entire outlook on life.

It would be wonderful if those who experience that change took as a lesson the fact that there may always be something big and obvious about the way the world works, that we may be missing. But instead it seems as though it’s more common that once someone has their particular realization, they assume that now they’ve got it all figured out.

What I think many of them – atheists and theists alike – are missing is the way our (Western) society functions, particularly for people other than themselves. There’s a great webcomic called Sinfest that used the Matrix as a metaphor for someone having just such a realization: You should go read them all, at least starting with the above comic. It’s got a badass feminist on a trike in place of Morpheus, a demon who’s lost her faith, and a former sex-pot who tries to show others what she can now see:

I bet a lot of atheists would relate to that comic if you replace words like “damsels in distress” and “hey dollface” with, say, “blasphemy is a sin” and “evil atheist.” They’d understand that these are messages that become a part of our culture and get unknowingly parroted by those who can’t see religion’s sometimes damaging impact on those of us who lack belief and value free speech. These atheists would never argue that those ideas are okay because religious people evolved to espouse them and they just can’t help it.

But many of those same atheists do make that very argument about the impact of the patriarchy, and many of them, like the male character in the above comic, are blind to the messages we all receive constantly, every day, about how men and women should behave and be treated.

Once you know what to look for, it’s scary how uniform and consistent some of the messages are. Here are some of the commercials that aired during the Super Bowl last night, one of the most-watched television events of the year:

An ad telling us that women will have sex with men in exchange for flowers. A naked woman is literally a billboard used to get attention from men in order to sell Internet domain names. Dream women are naked and available for sex with men. A woman is a car that enjoys being gawked at.

This is what we talk about, when we talk about “objectification.” The ads literally turn women into objects that have no emotion or personality aside from wanting to pleasure men. These are not exceptions – these are the rules that society plays by. It wasn’t a coincidence that all these ads were created by different agencies for a wide variety of products using the exact same message – it’s because each of those ads is a part of the patriarchy that is marketed to the patriarchy that reinforces the patriarchy.

A few days ago, I saw the rules in effect on Jessica Ahlquist’s Facebook page. You may remember Jessica – she’s the 16-year old who went to court to get her public high school to remove a religious banner. She posted a funny photo of her face on her page: 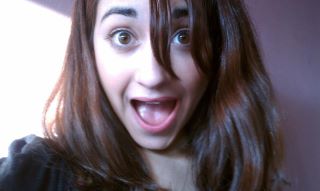 Amongst the comments, there was this:

“You should like the Sexy Atheist page, so you can post it there. It may be an exercise in narcissism, but it’s fun :-P”

I took a look at the Sexy Atheist page (which the commenter linked to in a follow-up), and it’s exactly what it sounds like: people posting photos of themselves and others commenting on how sexy they are, amongst links to the usual atheist memes here and there. Here’s the main profile pic, a naked Statue of Liberty: 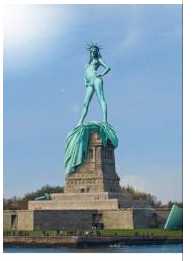 Who knew that Lady Liberty was hiding a stereotypically perfect Western body under all those robes? Anyway, I took a look at what was on the page. This is my absolute favorite, which makes me laugh every time I look at it: 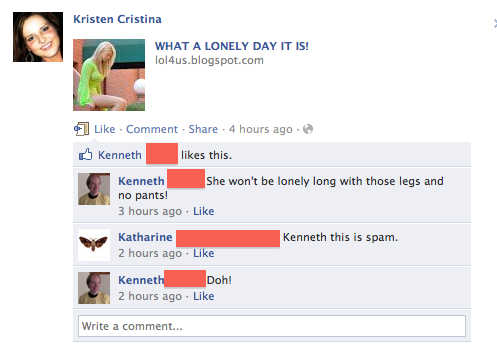 I picture Kenneth at the mall, hand up against a wall at the Gap, telling a mannequin how hot her tits are. “You’re the quiet type, aren’t you? Naughty girl.”

Anyway, the photos that were uploaded by actual people were all obviously meant to be “sexy,” in the way that we all define “sexy,” and the comments went along with it. Things like this: 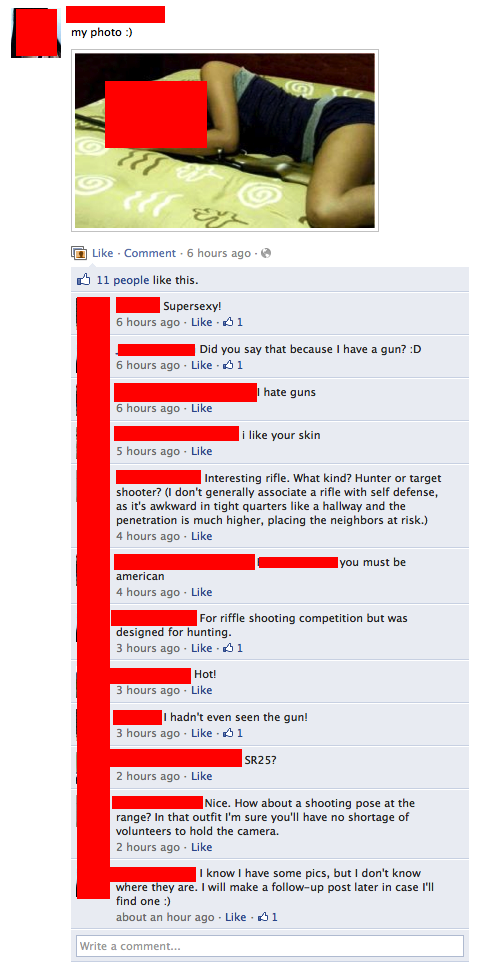 Here’s a whole photo album, with every sexy photo accompanied by dozens of comments like (these are all direct quotes from men): “Wow, I would like to give her some loving, oh yeah! Say my name baby, who’s your daddy!” and “does my boobs look big in this… (elfish princess)” and “You would look killer if you did not wear so much foundation…” and “Someone is getting fucked!” and “?:fapfapfap:” and “Oh my, I do love Asians. Yummy!” and “She looks legal age, or at least a jailbait… But she so fucking hot. Specially in that pose.” Those last two were in response to an Asian girl on a bed holding a teddy bear.

Not all the comments are directly sexual, but the vast majority are, so we can take a good guess as to what sort of reception 16-year old Jessica might find were she to take this man’s suggestion that she upload her own photos – adults would tell her how hot her body is and how much they’d like to date, marry, or have sex with her.

Which, for the women who want that, is fine. I mean, “fine” in that it appears as though many of them, men and women alike, are playing by (and thereby reinforcing) the rules of the patriarchy, which state that women should derive their self-esteem from presenting their bodies for men to judge. But that small bit of trouble aside, adult women have every right to upload photos of themselves anywhere they’d like for any reason they’d like and they should never be shamed for it.

But for those who do not want or need validation from others concerning their looks and sexual availability, it can be distressing to get these nonstop messages that they should (literally) submit. And it’s especially distressing to see a teenager encouraged to sexualize herself. 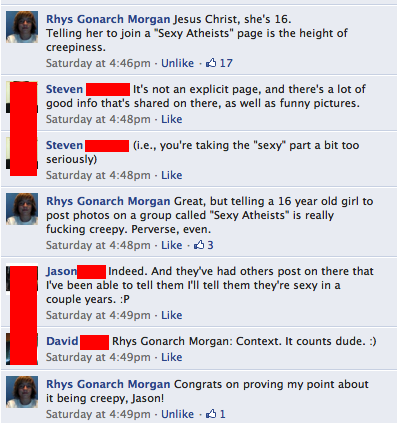 Rhys: Jesus Christ, she’s 16.
Telling her to join a “Sexy Atheists” page is the height of creepiness.

Steven: It’s not an explicit page, and there’s a lot of good info that’s shared on there, as well as funny pictures.

Rhys: Great, but telling a 16 year old girl to post photos on a group called “Sexy Atheists” is really fucking creepy. Perverse, even.

This is the point where all the adult men watching should have realized that Rhys was absolutely right. Steven should have apologized to Jessica and thanked Rhys for pointing out his mistake before things truly got out of hand. Instead, Steven doubles down and he’s joined by other men who say even worse things:

Jason: Indeed. And they’ve had others post on there that I’ve been able to tell them I’ll tell them they’re sexy in a couple years. :P

Imagine how blind to reality one has to be to make a statement like that. Because these are mostly atheists, I’m going to keep making analogies to religion, so imagine this was someone saying, “I tell the kids that they can start shunning infidels in a few years.” Imagine how you feel when you see documentaries about adults smiling when little kids start speaking in tongues at Bible Camp.

Now imagine someone telling your teen daughter that in a few years, she’ll be ready to be objectified. Don’t be angry . . . Jason is just following the rules.

Rhys continues to confront the apologists who fall over themselves attempting to justify their suggestion that Jessica offer herself up for sexualization. They resort to calling Rhys an immature kid, because he’s a teen. Like Jessica. PZ Myers sums it up perfectly on Twitter:

Old people who simultaneously condescend to teenagers, calling them “immature” and out of their depth…while in the same thread they suggest that teenagers ought to pose for a sexy atheist page, so they can leer over them.

Ophelia Benson also weighed in on the thread, pointing out that the problem isn’t just about Jessica’s age:

Even apart from her age – it is so fucking condescending to tell a woman to post her pic on a “sexy” anything page when the pic is not about sexy – it’s a very droll enactment of the emoticon. Jessica knows how to make the shape of a D – that’s some talent!

Once the apologists realize that there are many people who feel the comments are inappropriate and that they’re not going to win the fight, they start complaining that people were “white knighting” for Jessica:

Okay, can we quit the white knighting?

Jessica’s cute. Very cute. We know this. Whether or not Stephen’s comment/invitation was appropriate isn’t really important here (at worst it’s awkward, imo). I think Jessica can handle this herself pretty well if she thought it was that bad; the whole reason we’re here is because we know she’s an extremely capable person.

After it was pointed out to him that there is nothing wrong with friends sticking up for one another and calling out inappropriate behavior, this person later apologized and retracted his statement. Others continued to insist that only Jessica could have an opinion on the matter.

While Jessica’s opinion matters a great deal, particularly in a case that concerns her own Facebook page, it is remarkable to me that people insist we should never help defend one another. Put yourself in Jessica’s position – thrust into the spotlight for doing something very brave, pissing off religious fundamentalists, finding support in an atheist community, and then having members of that atheist community say things that make you deeply uncomfortable. Do you ask them to stop? Do you ask them to stop, after seeing other women vilified and bullied again and again for doing the same thing?

To Jessica’s infinite credit, she eventually did:

Well isn’t this lovely. My opinion: [there] are better and more appropriate ways of telling someone (in this case, a 16 year old), that they look nice. Thank you to Rhys for pointing this out and thank you to everyone else for backing him up.

I messaged Jessica and asked her if it was okay that I write about this. She said it was fine, and also told me that after she posted that, one of the men in question apologized to her. I’m not sure who exactly, but that’s why I’ve blocked out their names in the screenshots.

I hope those men feel truly pathetic today for fighting so hard to make a teen girl uncomfortable, and for forcing her to step in and tell them herself, directly, that they were being inappropriate.

As upsetting as I found that thread, I also see in it a lot of hope for the future. Both Jessica and Rhys are teens with keen minds and a compassionate, progressive outlook that can only serve to make the atheist and skeptic communities better, if they stick with it. And I hope they do stick with it, despite those who have yet to see.