It was almost exactly one year ago that I discovered my fellow skeptic Ben Radford misrepresenting research in order to write contrarian articles on the impact of marketing on women, and yet, here we are again. In this year’s effort, Ben takes on Riley, the adorable 4-year old girl who became an Internet sensation for her righteous rant about toy marketers and retailers reinforcing gender roles for little boys and girls.

There’s so much that is face-palmingly wrong about Ben’s article that I hardly know where to start, and Julia Lavarnway does a fairly good dissection following his piece. I’ll just highlight a few of the things that Ben had to say about Riley:

It takes a lot to strawman a 4-year old, but Ben’s done it. For starters, most of his takedown involves literally taking the 4-year old’s words at face value instead of comprehending what she’s saying with her limited vocabulary. But amazingly, Ben even manages to screw up listening to Riley’s literal words. From the video:

Oh, glad we got that taken care of.

Ben goes on to guess at why society has decided that pink is for girls and blue is for boys. One of his guesses is that girls’ toys are pink because their dolls’ skin is pink. Like in this scene, advertised in Walmart’s toys section: [EDIT: I forgot to mention this completely beside-the-point issue that I do find interesting, which is that white baby dolls tend to be dressed in pink while black dolls get green or yellow and Asian get purple or green. Seriously, check it out, it’s creepy.]

Or as you can clearly see in the background of Riley’s video (I’ve circled the dolls’ skin so you can see better): 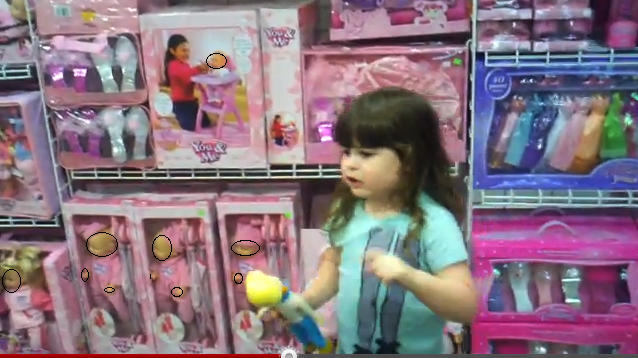 Uh-huh. Look at all that pink skin!

Just to prove my point here, I used the eyedropper tool to pick up the color of the dolls’ skin to show you what the scene would look like if Ben’s ridiculous fantasy story were true: [EDIT: I’m sorry, this is my second major edit but sometimes when I rant I forget to include some important points. Like this: Ben’s idiotic idea that girl toys are pink because of their dolls’ skin ignores all the dolls for boys that are Caucasian, like GI Joe, which are still packaged in blue or camo. Also, his point ignores the central issue: why are baby dolls “girl toys” in the first place? ARG SHUT UP]

Here’s another reason Ben made up for why girl toys are pink:

Or because some people smoke a lot of it, I guess. Whatever.

I think a more interesting and productive discussion would be to ask Riley, “What makes you think that you can’t or shouldn’t buy a superhero, or a non-pink toy?” Where did she get that idea in the first place? It’s bizarre. She’s free to pick up a princess or a superhero, a pink toy or a blue one… It’s not like anyone cares.

This is the point in Ben’s article where I had to put down the laptop, walk to my PS3, and kill things for half an hour before returning. It is one of the most incurious, ignorant statements I’ve ever read. It’s clear at this point that Ben has no idea that he lives in a society with fairly well-defined gender roles, where from a very young age we are taught that there are consequences for not fitting into those roles.

Girls who don’t dress up or wear make-up are called dykes or unfuckable prudes. Boys who wear skirts are called fags or treated for mental instability. Riley understands this, but apparently Ben does not, and that is very, very sad.

Ben ends his article with some truly disgusting (bordering on libelous) hypothesizing on Riley’s dad’s motivations for putting his daughter’s rant on YouTube. Apparently there’s no way that it could have been because he was proud that he was raising a strong, skeptical feminist who at the age of four is able to understand the manipulations of marketers.

I’ve skipped over a key section of Ben’s article because I wanted to finish with it, in the hopes that it will still be seen even by those of you who are scanning this already too-long response:

As long as we’re discussing the media and marketing, there’s another aspect to this video that has been overlooked: why is Riley so popular? Could it have anything to do with the fact that she’s an attractive, a cute-as-a-button precocious White girl?

…Numerous studies have shown that the news media tend to focus on photogenic darlings. Missing persons are far more to get the media’s attention if they are young, attractive, and preferably blonde.

…Research shows that we tend to trust attractive people, and their words have a halo of undeserved truth to them.

I quote that not because I disagree with Ben – I suspect that Riley would have still been very popular online regardless of her race or attractiveness (I guess Ben is saying that there are unattractive 4 year olds out there? Maybe I don’t know enough kids because I thought they were all pretty cute) but I agree that the mainstream media does pay a much greater amount of attention to pretty white girls than to any person of color. No, I only bring it up because I also just read this article on the same website, also by Ben. In his response to Julia Burke’s many valid criticisms, Ben writes (ED: taking her out of context):

Why do you claim that “a girl’s value as a human being, as a contributor to this world, is based on her attractiveness and her attractiveness alone?” Do you have any evidence that this is true, or that most people believe it’s true? Where did this come from? And if this is such a widely-accepted belief, how do you explain the fact that most girls in this survey reject it?

When confronted with Julia’s point that girls are taught that our value is in our physical looks, Ben rejects it without thought. Yet, within the same week he has the gumption to lecture us on the fact that if it weren’t for Riley’s physical appearance, no one would listen to her.

So anyway, winner of the cage match: Riley the 4-year old. Well done Riley! Word of caution, though: this probably won’t be the last time you get lectured by a man on the Internet who knows less than you.