Our story thus far: my three friends and I spent a few glorious days on the island of Langkawi in Malaysia. When I crashed a motorbike and everyone in town was laughing at me (even the woman who rented us the bikes, who did not believe our lies for a second because word travels quickly on a small tropical island), we decided it was time to cross the border into Thailand.

We had train tickets, and I was excited to spend my first night ever in a sleeping car. We took a ferry to the mainland and a cab to Alor Satar, a supposed transport hub and home to a very conservative Muslim population that was unaccustomed to seeing white Americans venturing outside the train station. Unfortunately, the train wasn’t running. Why? No one knew. It just wasn’t. And yes, that was the only train of the day. Will it run tomorrow? Maybe. Come back at 9am tomorrow. 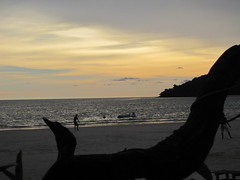 So, our driver took us to a (the only) hotel, where our rooms had scary unlit closets without doorknobs and roaches using the squat toilet in the bathroom. We dropped off our things and explored town, where we found a mall straight out of 1989 complete with Sega games in the arcade and a one-screen cinema playing two movies, one Malaysian and one a Bollywood movie called Blue. Are either in English, we asked. No. We chose Bollywood. It was fantastic.

We were the stars of Alor Satar. Everyone wanted to know where we came from, why we had landed there, and what on earth happened to me. Eventually I got tired of the motorbike story and told them it was a bar fight. You should see the other guy, I said.

The following morning we dropped by the train station. No trains today either, they told us. Transit strike. We asked for our money back for the tickets, but the register didn’t open until 10am. We went out to talk to our cab driver to see if he’d wait until then, and then take us to the Thailand border, but he refused. Panang, he said, wanting us to go back south to try to take a train from there. We found another driver who wasn’t so weirdly frightened of the Thailand border guards.

Once in Hat Yai, a Thai town just over the border, we booked an overnight bus to Bangkok. Thanks to the stress from the travels, or maybe just my injuries, I developed a head cold. Thanks, body! Nothing aids survival quite like a river of snot pouring out of your head and a cough that makes 40 already-suspicious Thai travelers think you have H1N1.

All of that brings me to today, as I sit in a Bangkok Internet cafe with a thunderstorm raging outside, staring at a bottle of Leopard Medical Brand “Brown Mixture”. These are the only words I can understand on an otherwise Thai-covered glass bottle. I have no idea what the dosage is, and no idea if it will kill me or cure me or otherwise abate my symptoms. I asked the exceedingly sweet man behind the counter, but the barriers of language proved too much so I payed for it and left.

“Brown Mixture” pretty much describes it. It’s brown, watery, sweet, minty, and kind of gross the way medicine should be. I’ve had a few swigs and I can’t tell if I’m feeling better. I haven’t been coughing, but that comes and goes anyway, so who knows? I tried Googling for ingredients but found nothing except this very nice photo of the bottle and box.

So, does anyone out there know their brown Asian pharmaceuticals? Let me know how close I am to death.