For some reason last night we suddenly received a number of complaints about the Teen Skepchick teasers. I thought it would be easy for uninterested readers to skip over, but apparently they were an affront to the eyes, or something. So, I’ve turned that off for the time being and will soon install a new method of promoting T.S. posts here on Skepchick.

I also turned off the DiggIt plug-in, since it made the site load too slowly for some people and crashed some browsers. I have no idea why and wasn’t able to fix it, so away it goes again. 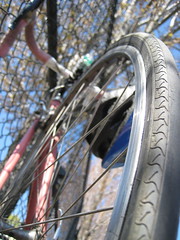 Finally, thanks to everyone who sent well-wishes following my Twitter update that I was hit by a car. The short story is that I was on my bike waiting at a crosswalk when a car pulled up to the stop sign and stopped. I thought he saw me and started to cross, and when I was in front of him he gunned it. Luckily he slammed on the brakes in time to not run me over. He and his wife were very nice and gave me a ride home, which was good because my beloved bike was busted, as was my beloved forearm, which was beginning to bulge in an unsightly way. Happily, ice packs and drugs have had their effect and this morning the unsightly bulge is hardly noticeable. I’m going to need a new wheel, and maybe a new bike, which sucks more than anything since it’s my main mode of transportation and I love my pink Bianchi. Actually, what will suck more than anything is the crappy feeling I’m going to get when biking next, knowing that I can’t even legally cross a street in the crosswalk without getting hit by a car, but I guess that’s life.

In any event, this incident should not distract attention from the fact that I was totally mentioned in Wired this month.