Sweet leaping babies it’s been a busy couple of days for me. Let’s recap, shall we?

Saturday morning I was out of the door at 6 a.m. to join my friend Aaron on an invigorating drive down to New York City for the first big live taping of an episode of The Skeptics’ Guide to the Universe. Oh, the thrill of the road! The anticipation of meeting new skeptics! The 20-piece box of Munchkins to enjoy! Since my usual mode of transportation to New York is the Fung Wah Chinatown bus ($15 each way!), this was like flying first class.

We made great time, up until we hit a bridge with traffic. We turned on the radio to find out the problem and learned that vehicles were being stopped at bridges for dirty bomb checks thanks to a recent threat. Um. Great.

Thankfully, we weren’t blown to bits and instead made it to the Brooklyn-area theater on time for mic checks and all that fun stuff. I got to see Todd Robbins (who runs Coney Island Sideshow) again, who I met at the Amaz!ng Meeting in 2006 and who I find to be one of the top 20 most entertaining people I know. Maybe top ten. I’ll jot down that list one day for your enjoyment.

Todd opened the show and MC-ed throughout, doing a fantastic job keeping things moving. Steve Mirsky of Scientific American joined the panel, and he was entertaining and informative as always. There were about 80 people in the audience (not bad for very little promotion) and we got plenty of great questions during the Q&A period. The nicest part was the audience helping us out with Science and Fiction — what a bunch of smarty pants.

After the show there was plenty of time for hanging out and chatting with audience members. This is always my favorite part, because I get a kind of high on stage and talking to the audience up-close is a great decompression. The only trouble in this instance is that I hadn’t eaten since I had those Munchkins at 6 a.m. and it was now about 3 p.m., which meant I was both starving and sleep-deprived. 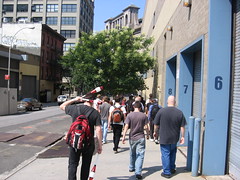 We finally managed to get everyone out the door to go to a nearby restaurant called Water Street. I think they were a bit surprised when a parade of 40 skeptics came rushing in, but they handled it pretty well. I was at the end of the parade, which was fortuitous because I caught two awesome young guys who had driven in from Massachusetts trying to escape before the party got started. I convinced them to stay and get a bite to eat with me, and we ended up having a great time. 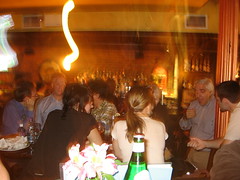 As things were winding down at Water Street, Jay (Novella, from the podcast) mentioned he wanted to go see the Bodies exhibit not too far from where we were. I had already seen BodyWorld here in Boston, but was happy to walk that way because I remembered that the Bodies exhibit is at the former Fulton Fish Market, where they set up the Spiegeltent surrounded by a beer garden overlooking the water and the Brooklyn Bridge. I went there last summer to see Devotchka and it was one of the best concerts I’ve ever seen. So, we walked the skeptic parade over the Bridge. Half went to the exhibit, and the other half of us proceeded to get tanked. 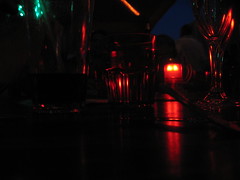 Eventually the Bodies group met up with us in the beer garden, where we all laughed and drank and talked until the wee hours. It was so much fun I almost don’t mind the jackhammering headache I had when I woke up the next morning. And which followed me for the rest of the day Sunday. Actually I think I still have it. But still, fun!

Sunday I spent hanging out in Prospect Park with a friend, and then ended up catching the ol’ Fung Wah home to Boston. Now I’ve enjoyed two days of pretty much nonstop craziness at work, and am looking forward to the moment I get to, you know. Relax.
As always, more pics on Flickr. Podcast to come.