This morning, it was spring.

Scientists tell us that spring started a few days ago, but that meant nothing to me, stuffed into multiple layers of tired winter apparel. This morning, though! Sun, 45 degrees F, and my bike beneath me as I outrun the trolley to work. That’s spring. 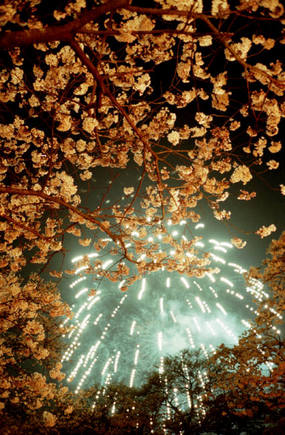 Apologies to those of you in a different part of the world. Some of you are still stuck in winter (we’ll probably backslide at least one more time before May) and some of you are gearing up for autumn. So in case you’re not feeling it, Slate.com has a little slice of spring for you: a photo gallery of cherry blossoms.

I love the easy metaphors that nature constantly provides us, and spring’s are often so full of hope and anticipation. This time last year, I had the chance to visit Alabama for the first time; coming from the frozen north and seeing all those pink blossoms was pretty amazing. Currently, tourists from around the US are flocking to Washington, D.C.to take in the annual Cherry Blossom Festival.

The cherry blossoms that inhabit the capital came as a present from Japan back in 1910, accepted by Mrs. Taft (wife of our fattest president!) on behalf of the nation. They were subsequently set on fire.

No, that wasn’t a joke — entomologists feared that the plants would bring exotic insects that could prey upon our own native species and convinced the administration to destroy the trees. In the other corner were the botonists interested in introducing variety to the local flora — it was an intense debate over a sort of ecological immigration.

Bug-free replacements were sent two years after the originals were burned, and these days the trees you see in the capital were cultivated on American soil. Consider them second or third-generation immigrants who have grown up in one culture but remain tied to another.

Here’s an old article I dug up with more information.

So, those of you who are lucky enough to see the trees in action this month, enjoy the history, enjoy the science, and of course don’t forget to enjoy this annual reminder that life is both ephemeral yet enduring (and other well-worn springtime metaphors).