I am fascinated with Scientology.

I live in Hollywood and so I am constantly forced to interact with the members of this elite group (of anyone) on the street on a daily basis. The members stand on the sidewalk in front of the Scientology buildings and try to find new people who aren’t familiar with the groups teachings. They have to find people unfamiliar with their teachings which is probably getting difficult since most of us have seen the South Park episode.

Still, members try to sell you, Dianetics and they hand out invitations to events such as Scientology run plays based on the Sci Fi writings of L. Ron Hubbard and other propaganda related to their church. They promote their relationship to ensnared Hollywood stars and search for emotionally damaged wanderers along the boulevard of broken dreams.When they approach me I say, “No, I don’t want to take a free personality test.” And, “I’m sorry but I think modern psychiatry has actually done a lot of good for people and unfortunately, I’m not really a fan of John Travolta, Tom Cruise or Kirstie Alley. Oh, and btw I’m happy already and I’d rather spend my money on pizza and you know… books that *make sense.”

Most of the time I just consider Scientology a mild and somewhat comical interruption to a stroll down Hollywood Blvd. I mean come on, have you ever seen an E-meter? It is a ‘tool’ that is very similar to a lie detector test from the 1950’s only repackaged to look super-duper high tech. Members of Scientology believe the machine can read your thoughts and “Thetan levels” if you hold on to the handles. And by paying a lot of money to use one along with the help of a member you can become “clear” which is the ultimate goal. I took this photo of one the other day during my stroll. 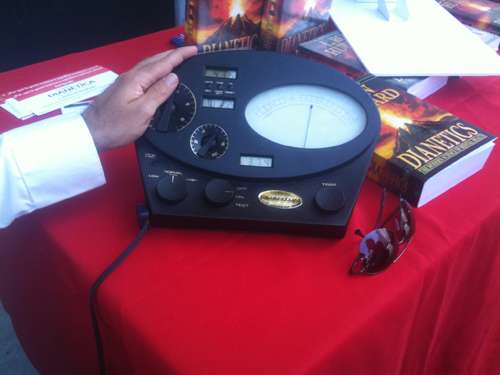 Scientology was mostly just something for me to giggle about but recently more and more information on what appears to be some truly nasty behavior by the church is leaking out. To many this isn’t news but it is information that now has some credible voices attached to it. This 30 page report in the New Yorker Magazine was recently published on the church of Scientology and its relationship with the writer/director Paul Haggis. It has all the broken relationships, success and failures, lies and deceit, death and straight up violence of a mob movie! And now allegations of human trafficking! Fascinating and downright SCARY stuff.

My question to you is, ZOMG have YOU read that New Yorker article? What do you think about it? Are there any pseudosciences or strange religious beliefs that you find fascinating? Who should play Tom Cruise in the movie that YOU just KNOW they will eventually make about Scientology?

*I did actually read most of Dianetics so if anyone wants to argue that I just don’t know because I haven’t read it, well, you can save that sales pitch for someone else. And trust me “most of” is MORE than enough of that crap.