Hello again, darling Skepchick readers! The long holiday weekend allowed me to take off for the rolling farmlands of my South Jersey home, but sadly interfered with my usual Friday posting of the Comment o’ the Week. With that in mind, I give you a Very Special Monday Edition of CotW.

There were a lot of fantastic comments, including this one nominated by Masala Skeptic. Ninjas? Bigfoot? Man, that comment had nearly everything. Sadly, it just could not compete with my favorite post in the thread pitting Scientist vs. Scientist in a no-holds-barred throw down:

I’m thinking that Tycho Brahe would show up at the designated time in a rain-soaked field just outside of Philadelphia, angrily awaiting the appearance of Franklin. His elk and his dwarf would be sitting nearby, patiently anticipating their moment of glory. A few hours later, Brahe would pack up his Supernova doomsday device and go home.

In the following weeks, the world’s scientific journals would be abuzz with accounts of Benjamin Franklin’s shameful cowardice in the face of Denmark’s most brilliant scientist. Franklin would dismiss these accusations with jocular, pithy remarks in the Philadelphia Gazette, insisting that he was off pursuing worthier activities at the time and honestly couldn’t be bothered with anything so dreary as a duel of honor.

Brahe would forever after boast of his victory over the cowardly Franklin, never noticing the slightest trace of smile that graced Kirsten Jørgensdatter’s lips every time she heard the name of Franklin. …

That post, detailing Franklin’s triumphant banging of Brahe’s girlfriend, was Draconius’ first comment on Skepchick, and what a way to make an entrance. Good job, Draconius! Your prize is the knowledge that we were thinking of you this weekend when the Philly-area Skepchick readers met up to eat, drink, view medical oddities at the Mutter Museum, and do naughty, naughty things to this statue of Ben Franklin: 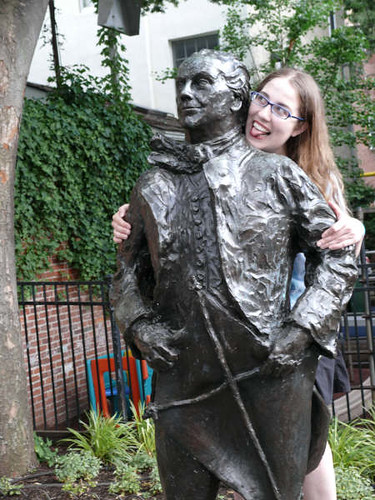 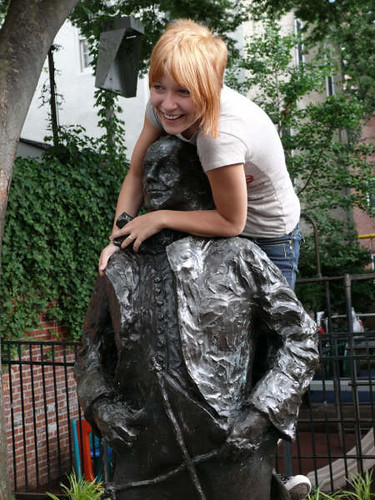 Thanks to Rav Winston for the photos! More pics of the Philly Craziness can be seen on the Flickr Skeptics Group and on Jason’s Facebook page.

Also, here’s our regular tip to new commenters like Draconius: go to Gravar.com to upload a pretty picture to appear next to your posts! Just sign up there using the same e-mail address you used here, and it’ll appear eventually.