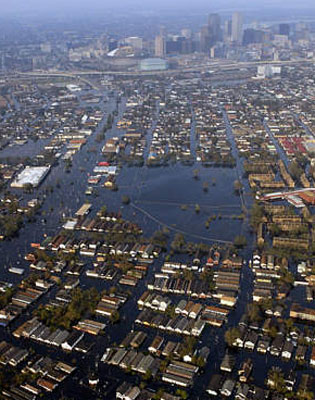 A few weeks ago I listened to a talk by John Mutter, a geologist at Columbia University. Mutter has two roles at Columbia. First, he is a geophysist in the Lamont-Doherty Earth Observatory doing traditional research in marine geology and seismology. Second, he is a faculty member in Columbia’s Earth Institute doing research on the links between Earth Science and Social Science.

Mutter researches how climate and the natural landscape play a role in determining economic prosperity and social vulnerability to natural disasters. For instance, a country that is located far from the coast and is very mountainous (for instance, some central African countries) have trouble developing because the cost of transporting goods is high, making the development of trade difficult. Similarly, in places where natural disasters occur with high frequency (recurring Earthquakes, hurricanes, tsunamis, droughts, and so forth), societies often have trouble developing. Societies which are already wealthy generally do better in recovering from natural disasters. However, societies which are poor have trouble recovering. If a poor society is unable to recover from one natural disaster by the time the next one hits, then the society may end up on a downward economic spiral.

Poor societies often have more trouble recovering from natural disasters because they generally have fewer emergency resources. For instance, poor societies have limited emergency responses such as medics and firefighters. Poor societies may also have limited or no early warning systems and may have less stringent building codes. After a disaster, a poor society may have limited funds to distribute for rebuiling. Most people probably do not have insurance on their houses, boats, cars, and other possessions. All of these factors mean that when it comes to natural disasters and also climate change, the poor suffer more than the wealthy. More people die, more property is lost, and less is done after the disaster.

John Mutter’s talk touched on the links between economics and the natural world. He also presented the basics on the differences in how poor and rich societies respond to and recover from natural disasters. However, Mutter’s talk was primarily focused on the recent Hurricane Katrina disaster. Mutter argues that in terms of death toll and damage, the Katrina disaster looked like a poor world disaster. That is, a poor world disaster occurred in an overall wealthy country.

Mutter argues, and I tend to agree with him, that Hurricane Katrina should not have happened in a first world country. Too much damage was done, and too many people died. The warnings and evacuation orders came too late, and many people did not have the resources to get out of town. Not enough has been done after the disaster to help New Orleans recover. While affluent neighborhoods and tourist attractictions are largely rebuilt in New Orleans, many of the poor neighborhoods still resemble wastelands. The Hurricane Katrina disaster highlights one of America’s weak points: while an affluent country, overall, there are cities such as New Orleans where extreme poverty remains.

As an affluent (well, I manage to live okay off my grad school stipend) white woman living in hoity-toity Cambridge, I can easily forget about these inequities. Aside from a few homeless people I walk by now and then in Harvard Square, I don’t interact with poor people on regular basis– or at least, I’m not aware of it. Similarly, I can easily become wrapped up in my scientific research and forget about people. I really enjoyed Mutter’s talk. First, I really enjoy the interdisciplinary nature of his research. Second, I think the Hurricane Katrina disaster is a good (or bad, perhaps?) way to put a spotlight on some of the economic and social stratifications here in America. America, overall, is a wealthy country. As one forceful hurricane shows, however, America– or at least her poor– is still vulnerable in many ways.

For those interested in exploring this topic more, here are some useful links:

The Earth Institute at Columbia University

An Article by Mutter on Hurricane Katrina