Have you seen Rick Perry’s latest ad? For those outside the US and those hiding their heads in the sand, Perry is running for President of the United States of America, and this is the sort of shit he’s putting out there:

I’m not ashamed to admit that I’m a Christian, but you don’t need to be in the pew every Sunday to know there’s something wrong in this country when gays can serve openly in the military but our kids can’t openly celebrate Christmas or pray in school.

As president, I’ll end Obama’s war on religion. And I’ll fight against liberal attacks on our religious heritage.

Faith made America strong. It can make her strong again.

I’m Rick Perry and I approve this message.

Forget that Christians represent the largest religious group in the US, at around 70% of the population. Forget that homosexual men and women are daily giving their lives for this country. Forget that separation of church and state protects the citizenry’s right to practice whatever religion they want. Forget that Rick Perry is wearing the same jacket Heath Ledger wore in Brokeback Mountain (found via Reddit): 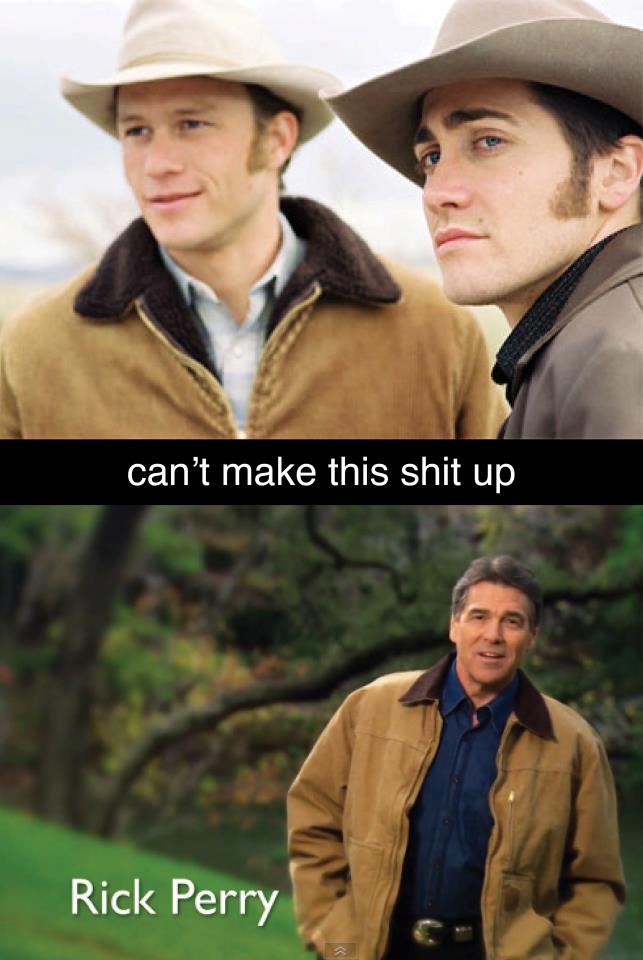 Thankfully, he’ll be ending that war on religion you didn’t know was happening. Remember when Obama authorized troops to storm into churches, kill all worshippers, and board up the doors? It happened about a year ago, I think, right after Obama approved about $140 million to be given to faith-based initiatives:

“It kind of fell from the sky, and it was unbelievable that we had this much extra money,” said Jackie Rucker, executive director of the church-sponsored nonprofit in Pennsylvania’s capital.

It definitely happened after Obama publicly identified as a “Christian by Choice,” saying that “I think my public service is part of that effort to express my Christian faith.”

I’m pretty sure it came some time during those two years that Obama dragged his feet and ignored gay rights groups who called on him to fulfill his campaign promise to repeal Don’t Ask Don’t Tell. But it was definitely before that well-documented string of suicides from gay students who were bullied, often by their Christian peers who tell them they’re going to hell.

Yep, that’s probably when the war on religion [Christianity] started. Let’s hope Perry wins the election! It’ll be nice to have a President who is anti-war.