Why are you reading a wrap up of Saturday’s event on Wednesday? Because that’s how long it’s taken me to regain enough energy to write it. Hosting an unexpectedly large and popular and successful event when you don’t know what you’re doing, you’re sick, and you’re 7 months pregnant is no small feat! I highly recommend considering that if you happen to find yourself peeing on a stick seven days before you have your first Skepticamp planning meeting. I also highly recommend getting SurlyRamics and Skeptical Inquirer to sponsor your event for some really kick ass schwag to sell and hand out to your attendees! Even if you’re not pregnant!

But this isn’t about me or my poor life planning; this is about Skepchicamp. And ho-lee-shit did we blow the roof off Chicago last weekend! It was so great, I hear Oprah is planning on skipping town before we do another one! 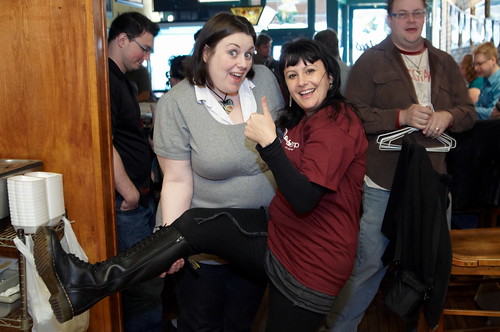 A quick tip, though, before I get to the breaking down: If you end up with a venue issue and are forced to find a new one, and you find a new one and they tell you that it’s no problem for them to host a small and informal conference for 60 people, ask them if they actually have 60 chairs toÂ accommodate your group. Then when you ask them how many people the room can actually hold since you are considering raising the head count, ask again how many chairs they will have for you. After being told that the room could easily hold 120+ people, I went ahead and raised the ticket maximum to 80. The room can easily hold 80 people, who are all standing, and who don’t have to make room for a “stage” and AV equipment. The room was not great for our size… and there weren’t enough chairs… and we found this out just 2 hours before the event. Lesson learned. (Though, thanks to being pregnant and sick, attendees were insistent that I always had a seat. Which was kind, generous, and really wonderful.)

As our slaves and gofers arrived at noon, I was tapped for jobs to assign because the planning committee showed up at 11:00 and finished everything that needed to be done. Way to be amazing and on top of everything, jerks!

At 12:15 pm the room was packed. And we were still waiting for another 50 or so people. [Panic and excitement sets in. The crew keeps kicking ass while I walk around saying, “Holy shit. We’re doing this today!” Over and over again.]

1:00 pm, we get our MC, Matt Lowry – The Skeptical Teacher, on “stage” and he talks about how great everything is then has me mutter some incoherent rambling about how everyone is fantastic and this is unbelievable. But we started on time, and that’s my point.

1:10 pm, I realize that I didn’t actually know Rebecca’s Skype name and that we had been trying to call some other Rebecca Watson for the last 10 minutes. I imagine the other Rebecca is used to it by now. I also imagine that she’s a homeopathic psychic Scientologist and she wasn’t on Skype that afternoon because she was out taking pictures of the Big Foot and Nessie honeymoon on a UFO. But that’s all irrelevant. We gotÂ a holdÂ of the Good Rebecca in time for the Skepchicks to do a full one hour panel about Grassroots skepticism and have a Rebecca Watson Giant Head to lead the way. It was rad.

At 2:15 the real people started giving their talks. I found that boring so I left and came back for dinner at 5.

But I’m not going to go into a play by play of each individual speaker because Don at Action Skeptics has already done it for me! He live blogged the entire event! And one thing I learned from reading that live blog is that even though I’m 7 months pregnant, I still have an impressive bladder… or perhaps my bladder is average and Don had an averse reaction to some deep dish pizza… or Don needed some alone time a lot because Skepchicamp was so great it was actually erotic. Actually, I’m just going to assume Don was really thirsty and stop thinking about why he pees so much.

Geez! Enough about Don peeing already! What is with you people and pee all the time? Can we move on? Please?

One of the most interesting and wonderful things about Skepchicamp was that we even let the opposition give a talk! One of Skepchick’s most vocal dissenters, the Bolingbrook Babbler, was allowed to give a talk at the end of the night, and while the video isn’t uploaded yet, the Babbler does have an interesting take on how the camp went down… and seems to think we were somehow oblivious to their infiltration. Let me remind you, Babbler – you spoke at my pleasure. You are nothing without me! HA!

Though, for the most part, the talks were given by not-so-seedy suburban tabloids (read: a hilarious tabloid parody that you should seriously check out every Sunday). Some really great local skeptics sucked down some pride and got up and did talks, many of them speaking before a standing-room-only packed house for the first time ever… many of them speaking to a group larger than Thanksgiving dinner at grandma’s for the first time ever. And I applaud every one of them. In fact, even some of our pros were really nervous – Buffy Baggot, international opera singer was even a tad terrified before giving her talk about opera woo! (We did ask her to sing because it would make her more comfortable, and while she considered it… seriously… she chose to talk instead.)

Dr Jennifer declared herself the Christopher Hitchens of pediatrics since she now talks before large audiences while drinking wine… and while she may have been nervous, she delivered one of the most important pieces of advice for talking to non-skeptics: Normal people do not keep lists of logical fallacies and they don’t care what post hoc ergo propter hoc means nor how it pertains to their beliefs.

Julie Lada relaxed with some… liquid encouragement… before giving a really amazing and informative talk about pet food and reminded me that everyone is trying to dupe me… and I will usually fall for it. Jamie Bernstein called us all stupid. And then Hemant Mehta came up and told us all the story of how Christians tried to get him fired… and he told it like we were all sitting at a dinner table… to make all the nervous people look bad. Friendly? HA! So Phil Ferguson came up and stole all of Hemant’s money. Video pending, Phil put his lecture up on his blog.

And one of the heroes of the day was Dr. Suzanne Willis who gave a talk with two days’ notice filling in for Debbie Goddard of CFI who couldn’t make it because she broke her leg. While we missed Debbie immensely, Suzanne helped fill that void.

Matt Lowry, my second in command and the night’s MC, put on a spectacular performance, which I hesitate to say because he’s made it clear how aware he is that it really was spectacular! Hemant caught some video of it while filming the back of my headÂ and posted it in his recap, but here’s some sneak-peak unofficial bootlegged footage of Matt’s performance (filmed by the Bolingbrook Babbler infiltrator):

And one of the really cool touches that added to the informal bar vibe was our Skepchicamp house band, The Tense Kids. These guys are really fantastic! They made the event super fun, singing songs about James Randi that plug Skepchick calendars! And they came all the way from Kentucky to play at our event. For free! You need to check them out and you need to love them. LOVE THEM! They deserve it!

We will be posting video of the Skepchicamp talks some time in the near future. I gave the crew the week off, so you’ll have to wait patiently. In the meantime, check out some of these really great recaps of the night:

Matt Lowry discusses how he “displayed awesomeness” at camp

Bruce Critelli doesn’t talk about the awesomeness he displayed, but and instead talks about general awesomeness

Wicked Librarian recaps without a single mention of the chair debacle

And Hemant… he was there and is still unmarried, ladies

And, if you were there, and haven’t yet, please take the little survey I put together so that next year I’ll know whether to have chairs for you or not! It’s just 15 questions so it should only take a few minutes… and just to save you some time, you don’t have to include anything about room size in your responses. I was in that same room as you all were… and even without you all in there, I barely fit!

Of course, I have to take a moment to thank my husband, Brian, for giving my favorite talk of the night. Unbeknownst to me, he conspired with the planning committee to get up in front of the crowd and talk about how much he loves me and how much he’s loved being dragged into being a part of Skepchicamp. It was sweet, romantic, and totally unexpected. And I cried. I thought I had video of it, but I don’t. It’s somewhere, though, and when I have it, I’m posting it everywhere.

And thanks to the planning crew… Especially Bruce Lurvey, who I don’t know, but I’m sure is a great guy if he’s anything like Ben Lurvey, the guy who’s done so much to help make this event a success.

I’m so proud to have my name attached to this event, and I couldn’t have done it without this amazing crew!