Last July, Rebecca, Stacey, Teek, Maria and I showed up in NYC with a list of finalists from our drink contest.

Okay, maybe we didn’t exactly show up with a list of finalists actually in hand. Stacey spent an hour on her Blackberry, while buzzed, trying to find a place on the internet where we may have had that list stored. Fortunately, she found it and saved the day! What we lacked in physical preparedness, we made up for with enthusiasm, determination and desire to drink your drinks.

Once we got our list of drinks and recipes together, our waitress and our bartender were awesome enough to make trays of the drinks for all of us. They were unbelievably patient and accomodating considering we were asking them to make drinks containing dry ice, frozen gin, American flags and ice cream.

As our waitress returned with our trays, our table started to look like this: 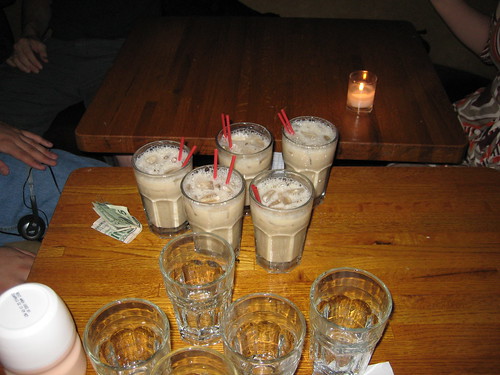 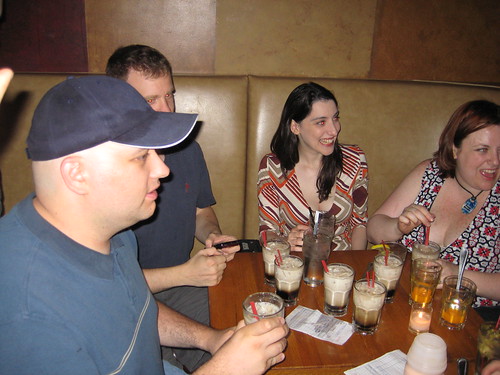 The finalists were (recipes included in case you want to play the Drunken Skepchick Home Game):

16 oz of vodka
2 Tablespoons of TANG

Add ice if youâ€™re a puss.
(I think we all added 2 TBSP of Tang per shot of vodka)

1 oz creme de framboise
1 oz chocolate liqueur
1 oz banana liqueur
milk or half & halfÂ Â  Â Serve over ice, topped w/ milk (or half & half)
* Must be served with a flag that reads â€œYour kid is dead.â€

mix first 3 ingredients, then put
half a banana rammed in the top

-Pour it into one measure of water from the seas of Santraginus V (club soda)
-Allow three cubes of Arcturan Mega-gin to melt into the mixture (it must be properly iced or the benzene is lost). (frozen gin ice cubes)
-Allow four litres of Fallian marsh gas to bubble through it (in memory of all those happy Hikers who have died of pleasure in the Marshes of Fallia). (pure oxygen)
-Over the back of a silver spoon float a measure of Qualactin Hypermint extract, redolent of all the heady odours of the dark Qualactin Zones.
(Crush some mint leaves with the spoon)
-Drop in the tooth of an Algolian Suntiger. Watch it dissolve, spreading the fires of the Algolian suns deep into the heart of the drink.
(2 sugar cubes)
-Sprinkle Zamphour.
(hell I donâ€™t know, shake it up in a martini shaker and strain into a chilled martini glass)
-Add an olive

Unfortunately, we were forced to make some ingredient substitutions and exclusions for some of the drinks. We were unable to get bananas at the bar nor were we able to get dry ice or mint. We didn’t have flashlights or radiation belts or industrial freezers filled with frozen booze and there were no flags in our drinks that said “Your kid is dead”. There was no ice cream. If these would have made a difference, and you lost points because of it… well, that’s the breaks kid. Part of us judging your drink was our ability to actually make the drink. Maybe your drink wasn’t ready to face the big city and undergo the scrutiny of a group of smart, drunk, hot chicks… but really, you all fared rather well.

Let’s start with our runners up:

NASA Moon Hoax – while generally delicious, this drink lacked a proper proof and was essentially a milky White Russian.Â  A good drink for your grandma or your girlfriend who needs to be cut off but will freak out and start stabbing people if you actually cut her off.

The Pangalactic GargleBlaster – In the end, this drink was too impractical. I think it also lost points for containing gin – not by me, I might addd, but certain skepchicks are racist against gin. I’m sure it would have been a lovely drink, but due to a lack of supplies, it ended up being a sweetened gin and soda. (note: Several hours later, Maria added Tang to this drink, making it divine and leading us to drunkenly conclude that Tang can and should always be added to everything.)

High-hatted Creamed Chocolate Monkey – At Skepchick HQ, during the semi-finals, this drink was a huge hit with Rebecca.Â  Perhaps it is a truly amazing drink. Ultimately though, we did not have the key ingredients (ice cream and an edible phallus) to make this drink what it should be: good.

Buzzed Aldrin – The fact that this shot is a “runner up” is, in my opinion, a travesty. This drink is AMAZING! I tried to give it a boost by giving it a 10 out of 5 in one category… but it wasn’t enough. I’m sorry, Buzzed, I failed you.

Though, it should be noted that much of the last hour and a half or so of the evening was spent doing Buzzed Aldrin shots… and, by adding a lemon wedge, it was even turned into a super hot body shot:

And that brings us to our winner:

Sylvia Browne!! – A drink that is tastier than anything you can imagine (save for a Buzzed Aldrin), but what really makes the drink is the”Your kid is dead” part; it adds new dimensions of fun to the drinking experience.Â  We weren’t able to fashion any flags to put into the drink, so we had to improvise. One of my favorite memories of my entire NYC trip, one that still makes me giggle, was right before we drank our Sylvia Brownes, we held our glasses up in the air and yelled “YOUR KID IS DEAD! WOOOOOO!” It was an incident that made the nice lady blogers from Skepchick.org appear to be nothing less than Michael-Jackson-insane.Â  Two words: Awe Some!

Congratulations to Justin! Use the contact us form to send us your address and Rebecca will send you your much awaited SurlyRamics necklace!

Runners up, use the comment box to tell us where to psychically channel your prizes of our love and appreciation.

A huge thank you to everyone who participated.Â  This contest was amazing.Â  Not only did we manage to have a great time and get hammered, but we also managed to put together what is hopefully the first of many Skepchick podcasts – all because of YOU!

Did Attractive Girls Get Worse Grades When Classes Moved Online?