I’m alone in the biggest, coolest hotel suite I’ve ever been in. I see I have 222 e-mails (not too bad, a lot are Twitter notifications saying people have signed up to follow. Hello new Twitter friends!) The suite is a bit of a wreck, and I just finished going through all the alcohol and determining its relative worth in terms of quality of liquor and amount remaining in the bottle. Those that did not make the cut were sent down the drain. There’s a decorative bowl that was on a plate stand, now filled with chips. Someone left four or five nice skeptical books on the coffee table, next to a completely destroyed Gideon Bible. My favorite leftover of the party, though, is what I found in this very Firefox tab when I opened the laptop this morning. It was, and I quote: “Note to self: Winslow….hooker pissing in a smoothie.” I recall typing that because I related the following exchange with my buddy Winslow and decided the reaction it got was so good that I should keep it in my pocket for future use (um, a little off-color, just a warning):

ME: I really wanted a smoothie for breakfast but the girl at the coffee stand told me no one at the Flamingo offers a thing like that. How ridiculous! A place called “The Flamingo” should have a smoothie bar. So I ask how much for the banana, and she says “$1.49.” I say, “And how much for you to take that banana and put it in that blender behind you along with the yogurt in that cooler?” And she just stared at me.

WINSLOW: Well, it’s Vegas. She won’t make the smoothie for you, but you could easily pay a hooker fifty bucks to do it.

ME: Right, plus for an extra twenty she’ll piss on me.

So there’s the hooker, smoothie, piss joke. I’m not sure why when I typed it last night I made it sound like the hooker was pissing in the smoothie, that doesn’t even make sense.

Since I’ve already posted something so off-color, I’ll add this pic from last night’s party, of my friend Simon using one of the two bidets in the suite. Click to go to the TAM6 Flickr set. 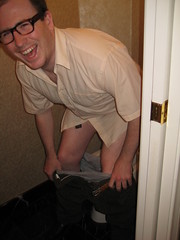 And for those of you wondering, most of the party was broken up at midnight. I was so sure that this year we’d go all night, but we had a new issue pop up I wasn’t expecting. I told the hotel repeatedly that there would be a party, and they gave us a humongous party suite with a piano and everything, but! The windows didn’t open. The A/C was going full blast all night, but it was absolutely boiling, forcing people into the hallways. Sound levels can be semi-contained when inside a closed hotel suite, but thirty people in a hallway tend to make some noise whether they’re trying to be quiet or not, so unfortunately our neighbors complained and we had to kick 90% of the party out. About a dozen people hung out and helped clean up, and then helped polish off as much of the remaining liquor as possible. At some point, George Hrab arrived and played us some tunes on the piano. A clip will be appearing on my YouTube account in the next hour (it’s processing): http://www.youtube.com/user/rkwatson

Also? My phone just buzzed with a text message, so I climbed out of bed to get it. With perfect timing, the maid walked into my bedroom and saw me butt-ass naked with absolutely nothing nearby to cover up with. Awesome.

That’s my cue to go take a shower and get back to the Flamingo. I’ll post a wrap-up at some point, but it might not be until tomorrow since I take the red-eye out tonight. Thanks to everyone who came to the party last night!