This post (in swedish) was originally published at Skepchick.se

Simone Giertz is a Swedish inventor, a youtube sensation, and the queen of creating amazing – yet somewhat impractical – robots. Some call them shitty, but I think they’re great. Who wouldn’t like a robot that feeds you cereal? Or washes your hair? Or one that wakes you in the morning by slapping you in the face with a rubber hand? Many of Simone’s videos have gone viral, so you have probably already seen some of her robots – maybe on on her youtube channel, or possibly as a gif, completely out of context in a random Buzzfeed article.

According to the fan mail we receive, us Skepchicks are satanists who worship Rebecca, our high priestess. My NDA prohibits me from confirming or denying this, but I CAN tell you that we love Simone Giertz as much as we love strange robots, and today I am happy to announce that I’ve had the opportunity to perform an interview with her! Please note that we will NOT ask her how to get more women into the tech business. We’ve been told she’s asked that question almost as often as she receives marriage proposals.

I’ve noticed that you get quite a few marriage proposals in the comment sections. Does that feel weird, or do you take it as a compliment?
Both. I think it’s sad that a lot of people are only interested in what I do because they view me as a potential partner. But I’ll take marriage proposals over hate any day of the week.

In earlier interviews, you’ve said that you try to avoid arguing with creepy/mean people on the internet. To what extent do you think that those kinds of comments are an effect of pure sexism? Could one presume that a male robot maker wouldn’t get that many suggestions to put a dildo on his robots?
I think mean comments get way too much attention. The majority of the comments I get are positively lovely, and I always focus on them. It’s mainly outside my YouTube channel, on sites like 9gag and Unilad, that I encounter comments like ”this is what happens when women try to play engineer” and any number of creative ways one could have sex with the robots I build.

Do you have any particular source of inspiration for new robots?
Boredom. Procrastination. Misdirected creativity.

Have you ever failed to finish a robot you were building?
I don’t know if I’ve failed per se, it’s more a case about me losing interest in a project before I’m done.

Has self-preservation, or fear of getting really hurt, ever stopped you from
going through with an otherwise brilliant idea for a robot? Have you ever had any accidents while making your videos?
Hm. I guess that would be the hair-cutting drone. Initially, it was supposed to cut my hair while I was wearing a wig and a safety helmet with visor. I ditched that idea pretty quickly.

Have you ever built a robot that turned out to be useful enough for you to use regularly?
Well, I used the iPhone case with arms for a while, but that was mostly because I couldn’t get it off my phone. Eventually I had to cut it up and pry it off with a plastic knife.

Do you think humans will create an artificial superintelligence? And would such a thing have mainly positive och negative consequences for humanity?
I think it’s already happening, and that it will be, for the most part, a good thing.

Do you think an advanced enough robot could develop a conscience and a personality?
Yes, but not necessarily in the same manner as humans.

You have a scientific education, and you are active in a scientific profession, while your mother is the presenter of a TV show that deals with supernatural phenomena – something that many would consider unscientific. Do you have any thoughts of your own with regards to supernatural phenomena, such as ghosts or spirits?
That’s a difficult question. I admire my mother for doing what she believes in, and I know that they don’t cheat [when producing the show]. But no, I don’t necessarily believe in ghosts or spirits.

Your robots often seem like something out of a science fiction vision from the 60s. Your cereal pouring robot, and your lipstick applying robot seem to fit in a context of moon bases and flying cars. Why didn’t those visions become reality? Why do we not travel in flying cars while having our makeup applied by a robot? Do people today lack sufficient imagination? Do we spend too much time on social media? In other words – why aren’t there more robots in our everyday life? And why aren’t there any flying cars yet?
I just think we set the deadline too soon.

You work in a field that is strongly dominated by men. How has that affected your work situation, and the things you create? Except for, that is, that you probably constantly get the question: ”how can we get more women to work in the tech trade”?
Not that much, really. Other than the fact that I receive a lot more comments regarding my ass than my male colleagues do.

Some of the commenters on your videos criticise you for ”not doing something meaningful”. What are your thoughts on those comments? Why is it more provocative that you spend time and energy building more or less useful robots, than for instance that Pewdiepie spends that same amount of time playing games? (And is there a gender factor? Must. Ask. About. Gender.)
I think it is interesting that for some reason it feels okay to spend a night scrolling through Instagram, but when you spend time on something such as building a robot you suddenly need a reason to do it. I believe that creation has a purpose in itself, and that what you are actually building is relatively irrelevant. I think it’s a question of what you consider as work or leisure. Playing games: leisure. Building things: work, thus requiring a purpose.

Speaking of Pewdiepie: in his episode of the radio show Sommar i P1 he spoke of how young people contact him, telling him they are happy to have him as a role model online. Have you received similar comments?
Yes, absolutely. It’s a strange thing, people looking up to you. It’s not like someone sends a contract including a manual on being a good role model. But I hope people are able to select the good parts and leave the rest.

And finally: isn’t it about time that P1 [program 1 in Swedish public radio] asks you to make your own episode of Sommar? [This is kind of a big deal in Sweden.]
Haha! It’s on my bucket list. Maybe next year. 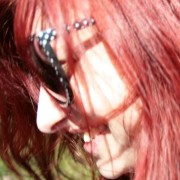 Homelessclubkid is the Captain of Swedish Skepchick. She's also a vegan skeptic who loves cats, books, and cosmology.