The brave and brilliant youngster Ahmed Mohamed has been showered with support since his ludicrous and racist arrest this week, receiving invitations to MIT, Harvard, NASA, Facebook, Twittter, and the White House, to name a few. (It’s important to note that the police who arrested him and the school who saw fit to punish him for a science project have yet to see any ramification for their actions. Internship offers are nice, but justice was not served.)

Even better, the boy made a heartfelt speech encouraging young kids to be themselves and vowing to “try my best not just to help me but to help every other kid in the entire world that has a problem like this.” Skeptics, science advocates, and anyone who values justice should applaud him.

One would think that the big names of mainstream atheism would commend the triumph of a young child’s passion for science and invention over bigotry and racism. Somehow, though, we’ve seen a different response.

From Bill Maher on Real Time:

“What if it had been a bomb? The lack of perspective on this is astounding . . . It’s not the color of his skin. For the last 30 years, it’s been one culture that has been blowing shit up over and over again.”

Richard Dawkins was disappointed that the boy merely built a clock instead of inventing the clock itself (which he’s never claimed; apparently Dawkins is hung up on the “build” versus “make the parts and then build” distinction). What a fraud! The leaders of movement atheism love to say they support young people who take a stand for what they believe at great personal risk. But when it comes to science—which, for many of us, is the antithesis of superstition and the approach to the world that can, given time and the right actors, actually solve its problems—they’re more than willing to throw young activists and pioneers under the bus when they’re not the right skin color or, Spaghetti Monster forbid, they’re Muslim.

This behavior indicates, to me, a greater problem in atheism: a refusal to admit that we, too, can demonstrate fundamentalist leanings when the evidence doesn’t support our personal bigotries. If a school expelled a young white kid for a science project, these same leaders would be up in arms, but when the kid happens to be Muslim, the reaction is justified because of—drum roll please—bias. Where is your critical thinking now? 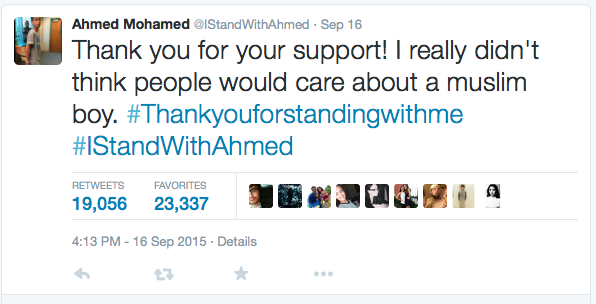