By now, I’m sure you’ve all seen the Worst Chart in the Universe, created by Christine Chan of Reuters, depicting the number of gun deaths (or murders?) committed using firearms in Florida, with emphasis on the 2005 enactment of the state’s Stand Your Ground law.

Here it is for those who haven’t seen it being snickered across Twitter or in Pharyngula. On Twitter, Chan defends her inverted y-axis as a preference and points to this image as her inspiration.

@john_self Thanks for the feedback. I prefer to show deaths in negative terms (inverted). It's a preference really, can be shown either way.

Others on Twitter and in the Pharyngula comments section have pointed out that the two charts aren’t comparable (one is a bar chart, and the other is a line chart; the Iraq chart also puts the x-axis at the top, making the intentional inversion much clearer; and for the dripping blood effect, Chan could have just reversed the colors, not the y-axis–and clarified that it’s dripping blood circa 1980s video games).

So rather than rehash the same old ground here, I am instead going to go out on a limb and defend Chan’s chart.

First, what everyone seems to be missing is that the chart is obviously intended to be viewed using a complex series of mirrors while standing on your head or perhaps only by opossums. 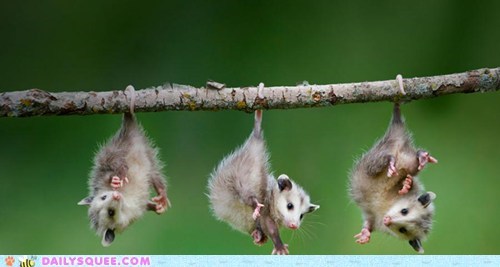 Second, this chart is clearly a sophisticated commentary on negative space in the guise of a horribly misleading chart. Sure, Chan implies she was going for the dripping blood effect, but given how tasteless and insensitive that would be toward the families of those who lost their lives to gun violence, obviously she was really going for something more subtle. The discerning artistic eye can see that she was actually depicting Picacho Peak. (Go on. Scroll up. You can’t unsee the obvious Picacho Peak in this chart.) And Picacho Peak happens to be in Arizona, another state with a Stand Your Ground law.

Third, and finally, she is absolutely right that the deaths can be shown either way. Business Insider demonstrates this fact by providing a more accurate version of her chart along with the original (although neither chart is all that accurate in the sense that gun deaths and murders are conflated, so we don’t really know what we’re even looking at from the start). But clearly, both ways can be shown. It is a matter of preference. Some people prefer accurate presentation of information and others do not. I can’t argue with that considering Bad Chart Thursday would not exist if this were not the case.

For example, maybe you’re in the mood for a scatter plot, with the years on the left. Also an excellent way to present accurate numbers uselessly. In fact, there’s really no end to the ways in which we can present accurate numbers without showing anything useful at all. So in essence, the fact that Chan was attempting to sensationalize the deaths with the dripping blood image and in this process did pretty much the exact opposite, conveying what appeared to be a drop in deaths, is nothing short of bad chart artistry. Chan is clearly the double agent of charts. Given her obvious concern for presenting information that is inclusive of the opossum community and that relies on artistic presentations of deeper truths that connect Florida and Arizona, I argue that this chart is in fact a brilliant meta representation of how we can mislead with visual information even when the numbers are “accurate.”

This is so impressive, in fact, that I am taking DrRubidium’s suggestion and creating an official contest for the Reuters Really Bad Chart Award. Whoever can take publicly available data and present it in the most ridiculous way possible will win fame and fortune in the form of kitchen towel with their chart clumsily hand-embroidered on it by me. Submit your charts to me at [email protected] by July 1. The winner will be announced after I recover from SkepchickCon and the best of the charts displayed here on Skepchick.

Picacho Peak photo a flipped version of the photo taken by Flickr user Bob of Arizona.