This is, without a doubt, the best thing that has ever been written about Men’s Rights Advocates by a 12-year old. Below are the five excerpts that made me laugh the hardest, each followed by a representative sample from r/mensrights taken from the past month of posts on Manboobz:

5. “/r/MensRights. Never in our society could the uninitiated imagine such a place.”

r/mensrights “activists” on sexbots and how terrible American women are:

Ian Ironwood: The personality emulators I’ve seen have more wit and charm than most dinner dates. They’re Sexbots. How smart do they have to be?!?

MaunaLoona: He hits the nail on the head. The bar isn’t exactly set high with the kinds of personality the average american woman has.

4. “MensRights is, undoubtedly, the home of great activists.”

r/mensrights “activists” responding to a woman who confesses to a regretful affair:

King_Dick: If you were a man, someone would take a bat to the side of your head and no one would give a fuck. This is the reality of being a man. I hope you shoot yourself.

funkifiknow: Yes, please shoot yourself OP. Do mankind a favor.

3. “NOTICE: I was informed that a section of this was hateful. After rereading it in a different light, I have come to understand how it can be misconstrued as such. So, the examples have been replaced with animals. Enjoy.
/r/MensRights is controversial for a reason. In the same sense as “quackers” of the 1720s, lions of the 2950s, seagulls of the 1280s, and many more.”

r/mensrights “activists” on the war on men:

2. “There were some people close to me that suggested I not run this article. That the repercussions of doing so would be unreasonably bad. Well, here you go, people.”

r/mensrights “activists” reacting to an article about the lack of women in Tolkien novels:

Ignorant bitch. She’s trying to find something to be offended by . . . This is nothing but juvenile rabble-rousing from some uneducated dipshit who has nothing better to do than hate men.

…because our “never EVER hit a woman” mentality has those men waiting until they completely lose control of their emotions before giving their women what they’re demanding.

And one more sample from r/Mensrights – here’s a comic that’s on the front page right now, fighting against the tyranny of insurance providers covering medicine for women: 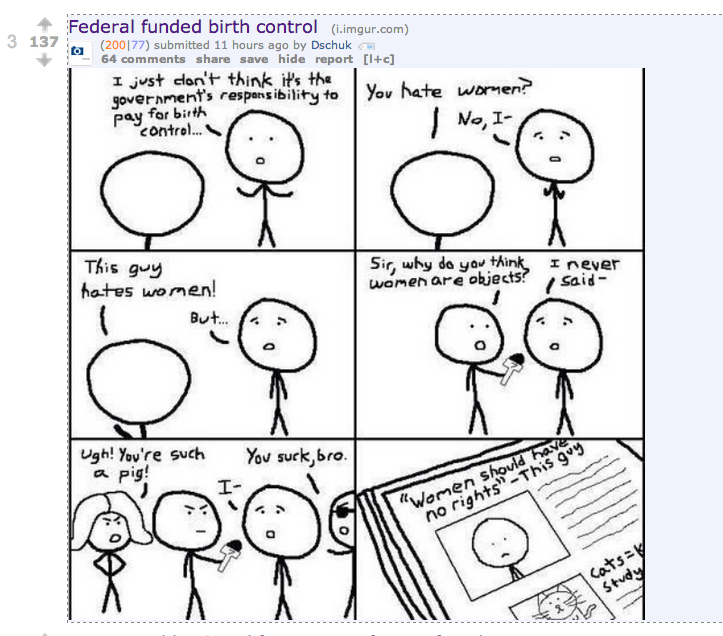