Well, another DragonCon has come and gone and I am now at home, covered in cats, sniffling my way through a bout of Con Crud (TM). Despite being high on DayQuil, I wanted to post a quick note about what in all went down.

First of all, I should admit that I was tied to the Skepchick Fan Table for the majority of the weekend, so I didn’t get to see any panels I wasn’t personally on (but I heard the Skepchicks who were on panels, like Surly Amy and Maria Walters, did a fantastic job!). However, that wasn’t so bad because I got to meet so many of you readers, and you were all fantastic! Thanks so much to everyone who came to the table and said hi, and/or told me that you support what we do here. Not a single person told me I deserve to be raped, which officially makes DragonCon 1,000x better than the Internet.

I really enjoyed all the panels I was on, though I have to say that my favorite is the same panel that’s my favorite every year – the Quiz-o-Tron 2000. For those who have never seen it, it’s a vaguely sciencey quiz show hosted by me, with a panel of contestants made up of comedians and scientists. It’s grown more popular each year, moving to bigger and bigger rooms. This year, it was in a rather big ballroom at the Hyatt, which I was worried about filling. No one likes a half-filled room.

As I tried to locate the room, I wondered what panel all the people in line were waiting for. When I found the room, DragonCon volunteers told me the line was for Quiz-o-Tron, and some people had been waiting two hours. I went and talked with some of them, and they were so excited and upbeat despite the long wait. I started to relax at the realization that we’d fill the room with awesome people (see the pic at right), though I’m sad that in the end there were many people who were turned away at the door because the room was too packed.

The actual Quiz-o-Tron went beautifully, though, all thanks to my hilarious guests James Urbaniak and Doc Hammer of The Venture Brothers, Amber Nash and Lucky Yates of Archer, Ken Plume of A Bit of a Chat and a million other things, Phil Plait of Bad Astronomy, author and Two-Time Quiz-o-Tron Winner Scott Sigler, George Hrab of the Geologic Podcast (scorekeeper once again), and a load of Skepchick Network/Mad Art Lab contributors like Ms. Information, Emily Finke, Surly Amy, and Tree Lobsters Steve, all of whom did a fantastic job tending bar for our half-drunk, half-teetotaler panel.

There were other highlights of DragonCon, too. The Star Party, organized by Maria, was fantastic as always and you should all definitely attend next year. Marian Call and George Hrab were a perfect double act, and Phil Plait and fellow Skepchick Nicole Gugliucci delivered some inspiring talks.

Another highlight was dressing up like a bunch of dorks. Several of us decided to be Star Wars characters with the genders reversed, and frankly I think our group costumes were way better than those super-professional-looking Captain America girls or whatever: 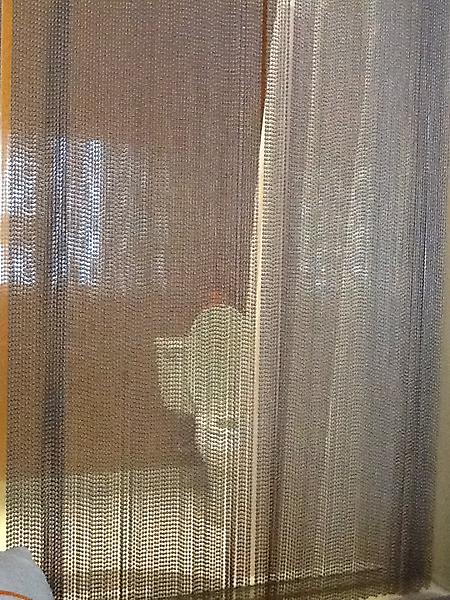 And then of course there was all the fun of squeezing three people into a room built for about half a person at the Glenn Hotel, which is what I get for booking at the last minute. This is the conversation I had with the front desk:

“I booked a double, but we’re in a single, so could we move? There are three of us.”

“It says here you booked a ‘guaranteed single.'”

“Well, the picture of the room was a double. I assumed I was booking a double.”

“Can you move us to a double anyway?”

“No, the single rooms are too small for rollaways so we don’t carry them.”

“OK. Can you move us to a room without a curtain-less window from the bedroom to the bathroom?” [see pic at right]

“All our singles have those. So no.”

“Do you want me to send someone up to cover it?”

“YES I DO THANK YOU”

Forty minutes later, someone came up and literally thumb-tacked a bedsheet over the window. For the rest of the weekend, the window was called the “peek-a-poo.” Yesterday, I booked a (double!) room at a nicer hotel for next year. Hooray for planning ahead!

So anyway, thanks to everyone who helped make this weekend a success, including Derek Colunado for arranging the panels and the fan table, and to Adam Isaak for taking awesome photos, building and setting up the Quiz-o-Tron, bringing me Cokes all day long every day, and making sure I got back to our tiny, tiny hotel room alive each night.

See you next year, Atlanta!