I now live near (well, within an hour’s drive) of Long Island Sound, and I wanted to learn more about the new environment I seem to be stuck in.  I signed up for a short oceanography cruise with Project Oceanology in order to spend some time on the water. I was excited to see some things I didn’t expect! 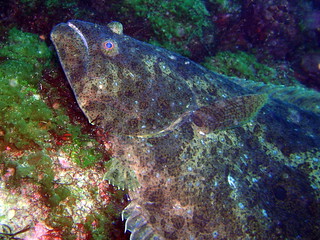 I’d never seen an actual live flatfish, the amazing fish with eyes that migrate to one side of their body as they grow.  What I didn’t know was that there are actually two kinds of flatfish in New England.  Flukes are are left-side-up fish. In other words,  their left side faces up and their right eye migrates to the left side of their body.

Flounders are right-side-up fish, so their left eye migrates to the right.  How crazy is the world that there are both right-eyed and left-eyed flatfish lying on the bottom? Nifty!

The biggest surprise was that our water sample pulled in a huge number of little Ctenophores, also known as comb jellies.  These tiny little animals are just about invisible if you are in the water–they are usually smaller than an acorn.  Ctenophores are a major part of the food chain in the ocean, and they superficially look like jellyfish (but can’t sting).

When we pulled up the water sample, what got dumped out looked like a lot of….well. Snot.  Ctenophores are oddly firm and jelly-like, despite being only two cells thick.  A fellow boater holding  one described it as a “tiny breast implant,” which sort of gives you a sense of the consistency and color.

The most fascinating part of comb jellies, though, is how they get around, and their incredible beauty. Here’s a nice little film that gives you a sense of how lovely and magical they are when not blobbing around in a bucket so I can look at them.

What unexpected discoveries have you made recently?

The Afternoon Inquisition (or AI) is a question posed to you, the Skepchick community. Look for it to appear Tuesdays, Thursdays , and sometimes Sundays at 3pm ET.