I’m fortunate to work at the Center for Inquiry, an anti-fantasy land committed to advancing science, secularism, and skepticism, where attending conferences like Dragon*Con or The Amaz!ng Meeting is considered “work.”

I get to go into the office each day and interact with some of the leading figures in a movement I care deeply about. We have casual conversations such as, “Hey, I picked this up off the printer, but I think it’s yours,” “Can I borrow your stapler for a minute?”, and, “Did you hear whether Neil DeGrasse Tyson is stopping by CFI later this week? If so, I’ll reschedule my dentist appointment.” (Seriously. That happened. One time I opened the door for a visitor, and it turned out to be Steven Pinker, so I gave him a building tour.)

Joe Nickell is a coworker I see nearly every day, so I sometimes forget the fact that he’s ridiculously awesome.Sure, he gets sent all over the world to do investigations, and I’m aware that he pops up on TV to deliver skeptical perspectives on ghosties or crystal skulls or crop circles or UFOs. But when I run into him in the hallway, we don’t generally drop what we’re doing to have a conversation about Nazca lines or spontaneous human combustion, although that has also happened too. (Give that man five minutes, and he’ll give you 20 minutes of stories.) So it was cool to see that the cover story in last week’s issue of Artvoice, the local alt-weekly paper, was a profile piece on CFI’s resident paranormal investigator and world-class skeptic. The online version even has audio recordings with Joe sharing tales of investigating the Flatwoods Monster, Toronto’s Mackenzie House, and UFOs over Buffalo. Heck, I’ve worked with Joe for six years, but I learned a lot about him. Here’s their initial description:

Nickell, 67, is a spirited sleuth with a frank demeanor and a crown of thinning gray hair. A pronounced arch in his eyebrows conveys curiosity. Discerning eyes behold the world from behind wire-framed glasses.

Since 1995, Nickell has investigated all manner of exotic happenings as the staff detective of the Committee for Skeptical Inquiry (CSI), a rationalist group in the Buffalo suburb of Amherst, N.Y.

He may be the only professional of his kind in the world, salaried by a reputable organization to travel the planet on the trail of monsters, mystics and miracles.

The article delves into some of Joe’s many, many, many “personas,” including these favorites: 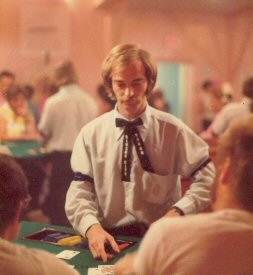 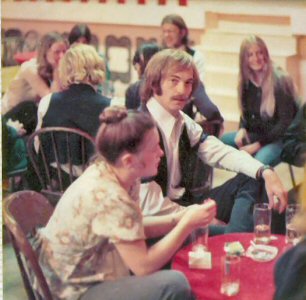 From joenickell.com: Blackjack Dealer; Croupier. I love these pictures.

He is practiced in the art of forgery. Once, many years ago, he managed a riverboat.

In comparison, here are some of the skills I picked up from previous occupations: mopping floors, grooming small dogs, bending photocopiers to my will, and throwing pizzas. The list is not nearly as interesting. 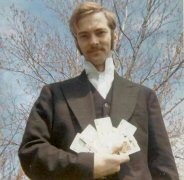 As a former magician, I was glad to see the article get into some of the connections between magic and skepticism:

Magic, like detective work, was an art of observation, so the choice of pastimes made sense. Nickell devoted himself fanatically to each, and through them, learned a pair of valuable truths.

First, he came to understand that there is more to the world than what we see, that even the sanest mind can be deceived. Secondly, he discovered that it was possible to get to the bottom of things—to unveil the trick behind an illusion, or to reconstruct a crime scene with clues.

These maxims would stay with him for the rest of his life. They would fuel his infatuation with mystery, but they would also make him a gentler investigator.

That touches on one of Joe’s guiding principles, fleshed out later:

He considers himself a humanist, which he defines as “an atheist with a heart.” He despises fakes and frauds, but in general, he believes in a kinder brand of skepticism—one that doesn’t spurn all believers as hoaxers and dolts.

If you’ve had the chance to catch one of his presentations, you may have noticed how harsh his words can be for charlatans, TV psychics, or anyone who’s willing to use supernatural and paranormal claims to manipulate emotions and scam people out of money. On the other hand, he has deep levels of sympathy for those who honestly believe they’ve had a paranormal experience, as well as for those who may have been duped by “snake-oil” claims. They’re not “stupid”; they’re just mistaken or ill-informed. Maybe we should call that “The Nickell Principle”? It’s an attitude I think skeptics should have most of the time, because we can all be fooled. You know, I tried for a few days to think of captions for Joe Nickell-based meme images for this article—I even asked on Facebook!—but there weren’t many zingers. I’ll share some of the ideas in the comments; I also look forward to seeing your suggestions.