Oh My. For years I’ve heard about the kid’s book “Bomby the Bombardier Beetle“, published by the Institute for Creation Research.  You might remember them as the  folks that suggested teachers of evolution should be hanged or drowned, rather than let them expose children to evolution.

My sister the librarian happened upon a withdrawn copy of this book in a library sale, and snagged it for me.  I’d never actually gotten to see it before (and was relieved to see that no one checked it out).

And, oh what a mass of WTFery this book is.

I knew it was intended as a children’s book, but I had no idea just how BAD the writing really was.  I have no idea why anyone thought this sort of prose would be accessible to anyone without a class in organic chemistry, much less the K-6 set.

I researched around in preparation for blasting this bomb of a book, and discovered that plenty of others had done my work for me.  A representative review in The Coleopterists Bulletin (55(1):241–242. 2001) by Brett Ratcliffe:

“I thought that the style of brainwashing seen in this revisionist book went out with the 1950s Cold War era. However, the Institute for Creation Research demonstrates that brainwashing is alive and well as it continues to wage its own cold war against reason in order to replace it with superstition. In this highly disjointed little book, the target is young children, which makes the authors’ sin of deliberate ignorance even more reprehensible. Educating children about the wonders of nature is a delightful endeavor, but here it is a vehicle for blatantly meshing pseudo-natural history with creationist dogma that has, at no extra charge, a good dose of patriarchal sexism thrown in…”

Preach it, Brett.
Wait.
Maybe that isn’t the best phrase to use here.

You can also read some additional flogging of the book in the Annals of Improbable Research.  The essay comparing Bomby to Harry Potter is a ROTFL must read.   Bomby and Harry share some traits:

And yes, you did read that correctly. This book about beetles also includes a chapter on dragons, and how they lived with humans.  What is it I don’t even.

As long ago as 1981, The National Center for Science Education (NCSE) was fighting “the beetle will blow itself up” myth as it was first promoted by Duane Gish (of Gish Gallop fame) in the 1970s.  For some reason, this butt-popping beetle has been a favorite of creationists for decades. 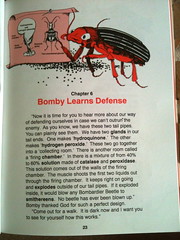 The defensive spray of the bombardier beetle is fascinating, but not unique or hard to explain, if you know much about insects and chemical ecology.  Insect exoskeletons are not initially hard–they have to be “tanned” and made hard by a chemical process called sclerotization.  This is the formation of quinone cross-links that make the initially pale and flexible exoskeletion hard and opaque.

Quinones. Hmm. Where have we heard that word before? Why, it’s part of what Bomby uses to blast his enemies!  (Seriously, how cool would it be to have an ass that is also a flame-thrower? Oh wait–we have covered that ground before.)

Quinones are basically benzine rings of various types, which means they are nasty and stinky.  Quinones are involved in the production of Hydrogen Peroxide, another component of the bombardier beetle defensive spray.  So, the chemical pieces of this defense can occur without any divine intervention. Or dinosaurs.

All you really need is some additional enzymes and a bit more sclerotization of the beetle butt, and your bug is ready to blow.  It’s not an implausible evolutionary story at all–there is even what appears to be an intermediate stage in the evolution of butt-blasting still around.

If you would like to know more about how insects defend themselves chemically, including these beetles, I highly recommend “Secret Weapons“, a book written by one of the leaders in the chemical ecology field, Thomas Eisner.

(There is a wonderful video that accompanies this book, but unfortunately it seems to be only available in VHS. If anyone finds it online, please let me know!)