For the past week, I’ve been following a story that has appeared on Manboobz and Jezebel about a jaw-dropping thread in Reddit’s Men’s Rights subreddit (which was recently designated a hate site by the Southern Poverty Law Center). The thread was posted on April 1 and was obviously shitthatneverhappened.txt: a man was asking for help because a woman he had sex with grabbed the used condom and ran for the door screaming about how she was going to impregnate herself with his baby. The man in the story tried to stop her, even going so far as to punch her hard enough in the stomach to bruise, but she got away and threatened to call the cops on him. What shall he do, r/mensrights?

To you, me, and every non-paranoid normal person on the planet, that is an obviously made-up story. Women aren’t hysterical shrews driven to birth children regardless of where the sperm comes from. We’re not Loki, planning great Rube Goldbergian machinations to enslave men into becoming hapless fathers who will pay us a grand sum each month for the rest of our lives. That obviously is not a common occurrence.

Unless you’re in the Men’s Rights Movement (MRM) hate group – then it becomes the scary story you tell one another around campfires with the flashlight positioned under your chin. “And then, in the dark of night, the evil whore slipped out of bed unseen, crawled to the bathroom, pulled the used condom out of the trash, and injected the sperm into her . . . with a turkey baster.” Men’s Rights Activists (MRAs) believe sperm-jacking to be one of the worst injustices men face. Seriously:

I normally try to stay neutral as best I can in matters relating to the men’s rights/feminism debate, but this has me grinding my teeth.

So this is what feminists think about one of our most pressing issues.

Now you can start to understand why the MRAs not only believed the story of the sperm-stealing girlfriend but vociferously defended the poor man in the story, especially to the point of excusing his violence:

There’s only two people who know you punched your girlfriend, and your girlfriend doesn’t have a lot of credibility nor does she have any proof. Any evidence that does come to light can be assumed to be self-inflicted. You’re safe.

You were about to be enslaved for 18 years… you’re NOT a bad person for protecting yourself.

Etc. If you look through that thread (FSM help you) you’ll find a handful of people calling “troll,” and many, many, many more trying to help the poor OP get away from the spermburgler and hide the fact that he punched her. No one decried the use of violence.

Well, today, the OP has finally come clean and admitted that s/he is a troll.

I wanted to reveal just how twisted these men can be in the pursuit of their agenda so I came up with a story they could not resist . . .

The spermjacker trope is irresistible to “men’s rights” activists because they believe they are perfect Darwinian examples of masculinity and as a result are irresistible to the hormonally irrational schemers that make up womankind. Narcissism and misogyny collide to make a toxic brew.

The “men’s rights” activists think I’ve unfairly distorted them. Take Reddit user Pooballs for example:, who had his “skin crawling” over my post: 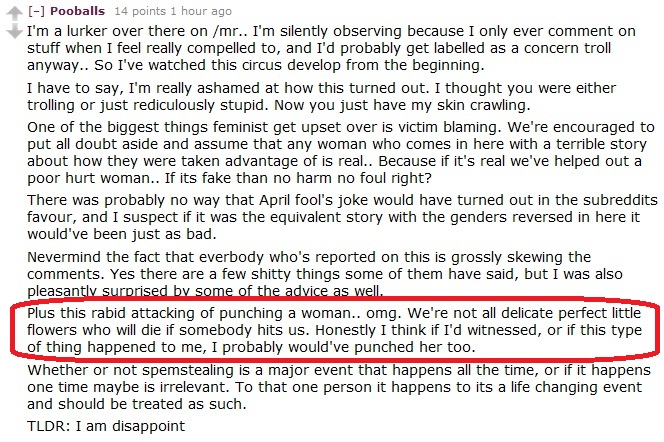 This sums up the “men’s rights” movement pretty succinctly. Shoddy “logic” about how much harder men are treated followed by an affirmation of violence against women:

“Plus this rabid attacking of punching a woman.. omg. We’re not all delicate perfect little flowers who will die if somebody hits us. Honestly I think if I’d witnessed, or if this type of thing happened to me, I probably would’ve punched her too.”

You lose MRAs. Your movement’s intellectual underpinnings are just a veneer to cover up your seething hatred of women. Check mate.

It’s not a nail in the coffin, sadly – the MRAs are now stumbling over themselves to declare that they weren’t really fooled and besides, spermburgling is a serious issue that needs to be addressed. They’ll take this as one more sign that there is a grand conspiracy mobilizing against them, feeding into their absurd paranoid fantasies. But at least the rest of us have something to chuckle about before going back to being super depressed that these people actually believe this shit.

Featured image jacked from Manboobz (click through for the wonderful animated version).