This headline…may be a bit of an overstatement:  "Soy Strawberry Frappuccinos are the latest threat to the vegan community."  Vegans are feeling threatened(?) by the revelation that Starbucks Soy Frappuccinos contain insect juice. Specifically, cochineal insect extract used as a reddish food coloring.

Is there really "bug juice" in your Strawberry Frappuccino? Yes!

The Seattle Times has some good reporting on the story:

"The strawberry base for our Strawberries & Crème Frappuccino does contain cochineal extract, a common natural dye that is used in the food industry, and it helps us move away from artificial ingredients," said [Starbucks] spokesman Jim Olson.  The base also is used in Starbucks' strawberry smoothies, he said, and the insect-derived extract is in some other foods and drinks the chain sells, including its red velvet whoopie pies.

Cochineal extract and a similar ingredient called carmine, also made from the insects, are bright red and can be found in fruit juices, gelatins and other foods, as well as many makeup products. ….Tropicana's website lists carmine as a colorant in its non-refrigerated ruby red grapefruit juice, and Dole lists cochineal extract as an ingredient in some of its fruit-in-gel products."

Cochineal, or carmine, is a red dye produced from an insect (Dactylopius coccus) about the size of a lentil that spends her life sucking the juice of prickly pear cacti.  When squished, her guts release a bright, intense red.  This color has the ability to remain incredibly stable over time, is stable at high and low pH, and is non-toxic. In other words, it's perfect for processed food or makeup that needs to be colored pink or red.

Cochineal has been used by humans for hundreds of years, and provides an important source of cash for a lot of rural Central and South American people.  There is some evidence the culture and sale of cochineal leads to more independence and higher female literacy in Mexico.  It's entirely consistent with Starbucks' policy to sustainably source their products to use a natural product like cochineal. 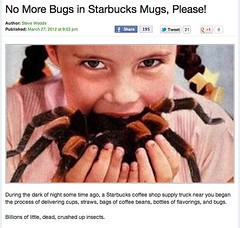 There is a change.org petition condemming Starbucks for using insect dyes; I'm tempted to start one to praise them for it!  The market for cochineal has been declining steadily, as more Western people discover what it is and freak the fuck out about insects in their food. That means less income traveling to our southern neighbors in the Americas.

I am a bit puzzled that people who willingly eat something called a Soy Strawberry Frappuccino, or [*shudder*] a Starbucks "Red Velvet Whoopie Moon Pie", are concerned about a tiny amount of insect extract. The reality is that anytime you eat processed food–including coffee and chocolate–you ARE eating insects. They may not be on the label, but parts of them are in there.

Americans (both vegans and omnivores) like processed foods, and foods that are fast and convenient. There is a price for having someone else process stuff in bulk–some things will fall in that you might not want to know about.  (You SOOO do not ever want to go to a pickle factory. Trust me.)

We also like our food PERFECT–which means that producers have to use chemicals to make fruit perfectly shaped and unblemished, as well as using lots of preservatives to make things last in their packages, and artificial colors to make them match our expectations.  This is the cost of convenience.
Sadly, as Americans become more and more disconnected from nature and the production of our food, we seem to become more convinced that the world should be made sterile and safe. (Don't even get me started on "Chemical-free." URGH).
Insects happen. Why not embrace them as value-added, rather than being grossed out? Insects are eaten regularly in all parts of the world outside the US, and some folks are trying to re-introduce this staple of indigenous Americans back into our diet.

The only thing that I would criticize Starbucks about in this episode is they need to be more open about the ingredients in their foods in general. Allergies to cochineal are very rare, but they do happen. Many people also want to limit their consumption of certain foods for religious or ethical reasons. (Some insects are considered kosher, but cochineals are not.)

I applaud Starbucks for choosing a sustainable, low-impact food-coloring source!
Now, how about selling bird-friendly coffee, too?