This was a big week for bee news!  New research on bees and pesticides was published, and a major white paper from the Xerces Society on the same topic was released.

The pesticides in question are called Neonicotinoids, since they are derived from nicotine (used as a pesticide since the 1700's). "Neonics" are systemic insecticides, or insecticides that are taken up by a plant's tissues and circulate within the plant. This makes these pesticides a highly effective and relatively safe insect control method, since only insects that eat the plant will be affected. It also is sometimes the only way to kill insects inside a plant; an insect boring into a tree, for example, can't be sprayed directly.

Neonicotinoid pesticides can also be applied as a root drench or a seed treatment, so there is no pesticide sprayed into the air, or landing where it should not go.  Farmers love neonicotinoids, since they not only reduce "off-target" effects, they last a really long time–usually one application can last for months, and sometimes over a year.  That saves a lot of money. 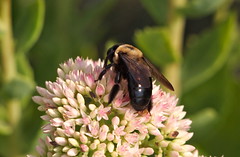 The problem is…because the insecticide circulates in plants' tissue, it shows up in flower nectar and pollen. And that's what bees collect and concentrate, and take back and feed to their young.  What initially seemed to be a very environmentally-friendly group of insecticides is turning out to be a risk for bees.
Carl Zimmer's excellent New York Times summary of the research on bees and pesticides is a must read:  Bees' decline linked to pesticides.

"In Thursday’s issue of the journal Science, two teams of researchers published studies suggesting that low levels of a common pesticide can have significant effects on bee colonies. One experiment, conducted by French researchers, indicates that the chemicals fog honeybee brains, making it harder for them to find their way home. The other study, by scientists in Britain, suggests that they keep bumblebees from supplying their hives with enough food to produce new queens….The authors of both studies contend that their results raise serious questions about the use of the pesticides, known as neonicotinoids."

Carl (I shook his hand once, so I can call him Carl, right?) does a great job of showing how the scientific community is still resolving how all this research adds up.  In a post on his blog providing supplimental information to the NYTimes story above, Carl discusses the difficulty of making sense of all this information:

I found this story to be especially challenging to sum up in a single nut graph. To begin with, these experiments came after many years of previous experiments and surveys, which often provide conflicting pictures of what’s going on with insecticides and bees. The experiments themselves were not–could not–be perfect replicas of reality, and so I needed to talk to other scientists about how narrow that margin was. As they should, the scientists probed deep, pointing out flaws and ambiguity–in many cases even as they praised the research. At the same time, these two papers did not appear in a vacuum. Other scientists have recently published studies (or have papers in review at other journals) that offer clues of their own to other factors that may be at work. And, biology being the godawful mess that it is, it seems that these factors work together, rather than in isolation.

If Carl Zimmer–an exceptional science journalist with access to the actual scientists that are doing the research–is having trouble trying to create a coherent picture of the information about these pesticides, I KNOW that the rest of us regular schmoes are struggling too.

Here is the important thing to remember as you process this new bee research:  CCD, or colony collapse disorder in honeybees, does not have a single cause.  It's likely that many different factors work together to create CCD.  It is a complex set of specific symptoms, and it's been known since around 1900 by many other names. Additionally, not all observed bee declines (and deaths) are CCD. It's hard out there for a bee.

There is clearly a pesticide problem with bees–even if we can't fully quantify it right now.  The Xerces Society white paper, A Review of Research into the Effects of Neonicotinoid Insecticides on Bees, with Recommendations for Action, had this to say about CCD:

"There is no direct link demonstrated between neonicotinoids and the honeybee bee syndrome known as Colony Collapse Disorder. However, recent research suggests that nenonicotinoids may make honey bees more susceptible to parasites and pathogens….which has been implicated as one causitive factor for CCD."

The Xerces paper is probably the best review of the recent research that you are going to find.  Not only is it written by Xerces scientists, who are folks what really know their bees, it also was reviewed by several other bee researchers I have a great deal of respect for.

Xerces thoroughly documents what we know about these pesticides and bees–and, unfortunately, we don't know nearly enough. Most of the published research focuses on honey bees, rather than the native bee species in the US.  (Honey bees are an introduced species in North America).  That means we don't have much data to work with to figure out how different bee species will be affected.

Personally, I found the most disturbing piece of the Xerces report to be their discovery of how many of these neonicotinoid insecticides are available over the counter to homeowners.  Calculating pesticide application rates is one of the toughest parts of farming (or pesticide applicator exams), and Xerces does the math to uncover some startling facts:

That is really scary.

Xerces raises some very important questions about what this means for our native bees that are already struggling with habitat loss and a spill-over of parasites and pathogens from introduced bee species. Butterflies, beetles, and flies also drink nectar and feed on pollen–pretty much any of our pollinators, including hummingbirds, could be affected if they feed on trees and plants treated with these insecticides.

I hope that new labeling is introduced so consumers know that these products have the potential to kill bees and other pollinators.  Unfortunately, because these pesticides are so very useful in agriculture, there are no easy answers. The things that make these compounds so very well suited for so many purposes–their ability to remain stable for a long time and spread through plant tissues–are also why they pose dangers for pollinating insects.

Are Vegans and Vegetarians More Depressed?

How the Flu Vaccine Might Help You Beat COVID