So, I was catching up on my news reading this morning, and stumbled across this horrific story. And seriously, it’s bad–don’t click this link unless you are prepared:

The reason I noticed this story was that the murderer dressed as an exterminator–and used a pesticide rig to spray the women with gasoline.  This was a pre-meditated attack, which makes it even more inexplicable and awful, if that’s possible. 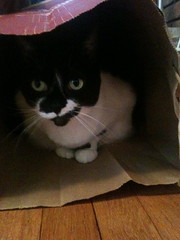 I spent a while being horrified about this, and angry, and hating humans in general. And then my cat jumped into my lap and demanded I pay attention to her. And I started feeling better.  Then I went and watched a video of a baby otter, and was ready to face the world again.

There is a fair amount of evidence accumulating that pets can help patients deal with stress and improve mental health.  You can read an entire Handbook of Animal-Assisted Therapy online, which assembles the data, theory, and best practices of what has become a type of alternative therapy I can actually get behind.

So, having a pet really does seem to help us deal with the upsetting events of life–including horrific violence against women (again).

Do you have a pet? Does it help you deal with strong emotions?  Can you post a photo of it so we can all feel better?  Is it a copout if you read a story like this and then go look at otters?