Most humans–and I include quite a few entomologists in that category–love to hate roaches.  This is a sad thing, because the vast majority of roaches never set foot (feet?) in a kitchen.  The few species that tap-dance around in your sugar bowl are just a tiny piece of a huge spectrum of amazing roachy biodiversity in the world.

Over 99% of all roach species are innocent soil and forest dwellers, and are important for ecosystem functioning.   Some of them can leap like grasshoppers.  Some of them can run 4 times faster than a cheetah (well, in terms of body lengths traveled per second, anyway.)  The group of insects with the highest frequency of parental care?  Roaches.  One estimate puts roaches at 24% of all arthropod biomass in tree canopies, and 43% of arthropod biomass in alluvial forests.  There are a LOT of roaches in the world, and you’ve never seen or heard of most of them.  H. E. Evans may have said it best:

“The study of roaches may lack the aesthetic values of bird-watching and the glamour of space flight, but nonetheless it would seem to be one of the more worthwhile of human activities.”  [Life on a Little Known Planet]

This week a new paper came out that highlights the importance of roaches to an animal we have kinder feelings about: 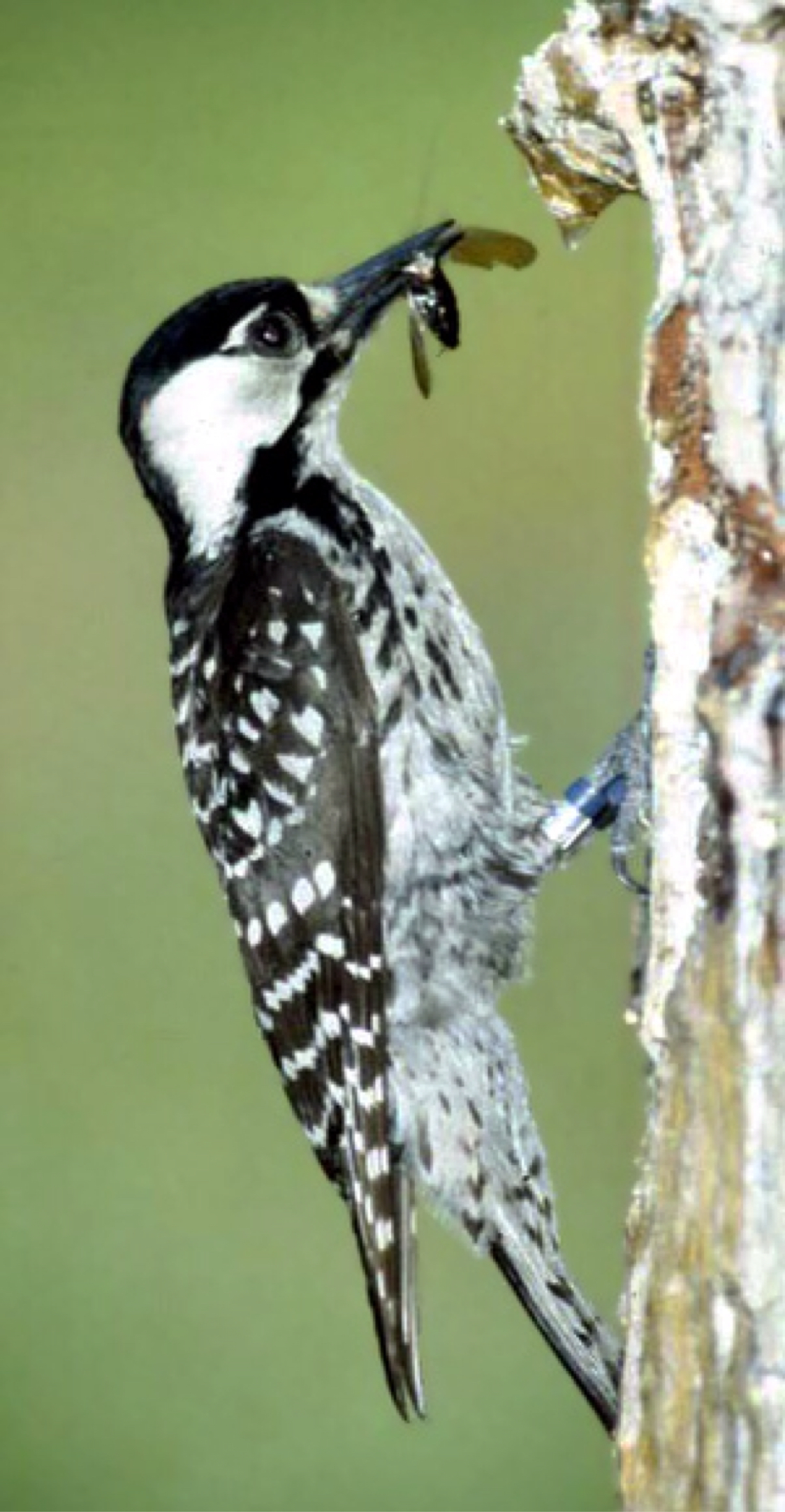 The red-cockaded woodpecker is an adorable little bird that lives in old pine forests. Historically their range covered much of the eastern US, but these days they are down to remnant populations in the southern US, and they’ve been listed as an endangered species since 1970.

Red-cockaded woodpeckers need large stands of old growth long-leaf pine to survive–they are unique because they nest in living trees, not dead trees.  And here is where roaches come into the story–69.4% of the food given to nestlings is wood roaches.

Logging has reduced the number of old pines, resulting in a major loss of habitat for the birds.  Artificial nesting cavities have been drilled in trees in hopes of getting more birds to breed. Deciding where to drill a nesting cavity means assessing just how many roaches are in an area, and if there are enough roaches around to support a brood of hungry baby birds.

The majority of wood roaches are secretive and nocturnal, so finding them and counting them is not an easy thing.  They live underground, under bark, and generally hide in places you can’t see.  It’s not only humans that have trouble finding the roaches–this also makes it tough for the roaches to find each other for mating.

Like many other insects, they’ve solved this problem with chemical signals called pheromones.  Pheromones are “chemicals emitted by living organisms to send messages to individuals of the same species.” By making a species-specific blend of chemicals and releasing it into the air, insects can communicate over great distances.

With sex pheromones, the message is usually from the female, and has the content “I’m here and ready to get it on, big boy!”  Male antennae are exquisitely sensitive to even single molecules of a female sex pheromone. Because of that sensitivity, you can use male antennae as a type of pheromone detector. (Watch an animation of what happens neurologically in an antenna when pheromone hits a receptor, via UC Davis.)

You can hook up a male antenna to electrodes and actually measure just how much the neurons depolarize in response to a specific compound.  This is electroantennography, or EAG.  In really fancy EAGs, you can run an unknown compound through a gas chromatograph (GC) and an EAG simultaneously.

With the help of these expensive machines, you can extract the pheromone gland from a female, get information about the structure of the chemicals from the GC,  and figure out just which chemicals are the ones that attract the males with the EAG.  The graph at the right is what that looks like.

It’s fairly clear when you find the right molecule–the male antenna produces a big spike like the one you see for compound #1.

(Side note:  I actually did a fair amount of EAGs in my earlier research, and I have to say I’ve never felt more like Dr. Frankenstein in my entire life. You basically decapitate an insect and then stick all sorts of electrodes on their brain and antennae, and hook it up to a lot of really, really fancy instrumentation.  I kept having to stifle the “Bwa ha ha ha ha ha” that wanted to bubble up, and found myself rubbing my hands together in glee a lot.)

There are many insects for which humans have figured out how to synthesize artificial pheromones and use them as a type of buggy birth control.  In this case, knowing what the pheromone is for this wood roach gives humans a simple way to assess how many roaches are in an area under consideration for woodpecker habitat restoration.

You put the pheromone out near a sticky trap; male roaches come a running for some roachy lovin’, and then you count up how many of the unlucky suitors end up dead on a glue trap.

And now a surprise ending much more pleasurable than that experienced by the roaches on this trap: a holiday entomological carol written about this very research!

This carol actually includes some details I left out, like the species name of the roach (Parcoblatta latta); the researcher whose lab this work was done in (Coby Schal); and the use of nuclear-magnetic resonance (NMR) to determine the specific chemical structures. Enjoy!

(to the tune of “Walking in a Winter Wonderland”)

Nuclear magnetic resonating
Let him know what turned a suitor on.
Then he synthesized a mix for baiting
And watched the males all falling for the con.

Now his sexy solution
Tells about evolution:
Viagra for some, for others it’s dumb.
Parcoblatta lata wonderland.

People say the lata’s a home-wrecker,
But the bugs are happy in the wood,
‘Til they’re chomped by red-cockaded pecker
Who wants a lata latté in the ‘hood.