Ah, the Holidays. The season when introverted curmudgeons like me….are fairly miserable and awkward, actually.  I’m not good enough at small talk to do well at holiday gatherings:

“What are you doing for Christmas?”
“Um….lamenting the over-commercialization of your imaginary savior dude’s birth? And avoiding my family?”

Over the years, I’ve perfected a way to free myself from the stress of having to whip up a special dish for the obligatory office potluck.  I’ve carefully developed a reputation for insect cookery. I casually make sure everyone in the office knows this. 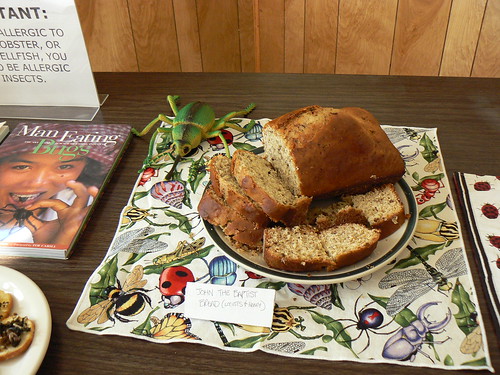 Since I’m in a new job this holiday season, I made sure to loudly ask my coworkers where the bait shops are in our town.  I need a bait shop for the key ingredient in my traditional holiday John the Baptist Bread, you see.

This bread’s name comes from a passage in Mark 1.6: “And John was dressed with the hairs of a camel and with a belt of skins around his loins, and he ate locusts and wild honey.”  I skip the camel hair part–I have quite sensitive skin–and substitute in roasted crickets, since locusts are hard to come by in Connecticut in mass quantities.

You grind roasted crickets into flour (a coffee grinder is excellent for this, but you will find the odd antenna in your coffee later on) and mix it with lots of honey to make a very nice little cake.  It’s actually quite delicious.

This year I already have gotten word that I don’t have to do any roasting or baking, though. I achieved my goal of being dis-invited to the potluck early–I’ve been instructed to bring only a bag of chips and dip. In sealed containers.  WIN!

I don’t just eat insects to fuck with people (although that is an entertaining side effect). Entomophagy, or insect eating, is actually quite common in the world.  Insects are the ultimate sustainable agriculture, requiring far fewer resources than other forms of livestock, and they produce fewer greenhouse gas-causing emissions per pound of protein. And they are delicious!

I like to cook with insects to make people think about why they would be excited if I brought shrimp cocktails to the potluck, but horrified if I brought them a grasshopper curry.  Both are arthropods, and frankly grasshoppers have a more appealing lifestyle. For some reason, Americans don’t think of insects as food, although an estimated 40% of the world’s population eats insects on a semi-regular basis.

This graphic shows in a nice visual way how most of the food that goes into a cow…does not become part of a cow. It ends up in a little steamy pile behind the cow, since they aren’t terribly efficient at converting grass or corn into cow meat or milk.  Insects, on the other hand, are just as protein rich as a cow or a pig, can be bred under your bed (I haven’t seen your bed, but I’m betting you don’t have pigs under there), and have a high profit margin. Note that the meat processing is where a lot of the profit comes from–which is why what farmers get paid and the price you actually pay at the store are sometimes extremely different.    The nice thing about insects is that there isn’t a whole lot of post-mortem processing to do, other than perhaps removing the wings.  You don’t need a professional or sharp pointy tools to carve a grasshopper rump roast.

Insects are a great way for subsistence farmers to make some cash–and raise nutritious food without a lot of land, water, or resources.  100 grams of caterpillars can provide all of an adult’s recommended daily protein, along with iron and several important vitamins.  That’s a lot cheaper and more sustainable than a steak!

So, while I have been excused from bug cookery for the upcoming potluck, I do still have a secret evil plan to expose my co-workers to entomophagy and convince them it’s cool.  I found some big-ass ants on sale.

Seriously, that’s their name: Big-Ass ants.  In Colombia, where they are harvested, they are “hormigas culonas.”  Big-Ass Ants are leafcutter ants  (Atta laevigata), and have long been eaten in Central America.   I had some queen leaf-cutter ants, Atta texana, earlier this year courtesy of Dave Gracer when I came up to interview for this job.

(What? You don’t arrange clandestine cookery of edible insects when you have a faculty interview? Huh.)  The ones Dave cooked for me were awesome–they had kind of a nutty Chex Mix taste. I could totally see snacking on those like popcorn.

So, when I saw these toasted ants on sale, I made an impulse purchase. 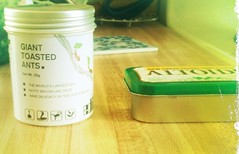 Alas, I did not read the fine print carefully, and so was a tad disappointed when my smallish tin of ants arrived.  I have photographed them here next to an Altoids tin.  They don’t quite have the wonderful taste of the texana ants–they are a bit dry and dusty–but still have a lovely nutty taste.  And they do indeed have a lot of junk in their trunk–it’s just about all butt, with a tiny head and legs attached.

It turns out that the Altoid tin is exactly the right size to carry all the ants in–so that I can put it in my pocket and offer up ants as an appetizer at the staff potluck.  I am trying to figure out what dip might best go with them–I think hummus would actually be pretty good, with the ants substituted for pine nuts.

Fat Bottom Ants, you make my rockin’ world go round.

Why Are White People Scared of the COVID Vaccine?

Are Some COVID Vaccines Better Than Others?