I started getting questions about this “urban beehive” early in November.  I thought it was fairly obvious that it was a gimmick–a PR op by a company that wanted to get some free press.

And yet…it has become the story that will not die:

“The extraordinary contraption hangs inside the house and features see-through materials so you can watch the insects at work.  Separated into two parts, a flower pot and entry passage sit on the outside wall and the hive hangs indoors. Owning one means doing your bit for the environment – since honey bees are key pollinators – and getting a handy supply of very fresh honey….

The removable glass case even cleverly filters light on a special ‘orange’ wavelength, which is used by the insects for sight.  Called the Urban Beehive, the design is part of a new project by Philips called the ‘Microbial Home’.

Today, I found an article in the UK Mail–not a good major newspaper, but still a major newspaper, printing the entire press release unchallenged.  I expect better from professional journalists.

I was able to find out this product was vaporware in less than 1 minute. It is, as Patsy says in the Holy Grail, “only a model.”  What ever happened to finding at least one–ONE!–secondary source to comment on something? Every story that I have seen so far has printed the basics of the Philips Press Release with pretty photos. And NONE of them seems to have had the thought:

“Hang on. Perhaps I might ring up some beekeeper chappie and ask him about the feasibility of this beehive?”

Yes. That would be a good idea.

Since there seems to be a lot of coverage about this thing, and I fear that the earlier bump of coverage is about to be repeated, I thought I would take some time to point out that this hive will not be coming to a store near you. Ever.  Philips introduced this as part of a design contest called “Microbial Home.”

Their designers came up with some pretty crazy ideas about what the home of the future would look like–including a creepy diagnostic bathroom tool that will analyze your feces and saliva, and something called “bio-light”, a methane digester that looks like a molecule with nipples. (The digester is where the feces and saliva go after the creepy diagnostic bathroom is done with them. I still don’t know why there are nipples, though.)

None of these, including the “Urban Beehive”, are real products. They are entirely conceptual, other than the pretty plastic model made for the Design Show.

WHY did so many media outlets that should know better unquestioningly tout this story, completely unchallenged?   I wish I knew the answer.   Even if this beehive did exist, it would be a very bad idea, indeed.

As best I can tell, this indoor hive is what you get when you build a hive based on information about bees that you got entirely from Wikipedia. Or maybe Sports Illustrated.
It is nice and shiny….and shows a complete lack of understanding of how bees live their lives.

First of all, the purpose of a bee hive is to make more bees.  The honey is stuff that we steal from the bees.  That’s why they get so cranky about honey harvesting–we are taking the food away from the mouths of their children. Literally.

This hive has no place for bees to lay eggs and rear their young. You’ll end up with brood mixed in with the honey and pollen stored in the hive.  Which means…you are going to get a lot more protein and fiber in whatever honey you manage to extract than you might be comfortable consuming.

But hey, bee brood is actually delicious, and eaten in many other countries. So perhaps you will boldly go forward with a plan to extract honey. That’s going to probably destroy all your larvae. Whoops, no more bees.

This design for smoking the bees doesn’t really solve the problem that to get at the honey you have to remove the cover completely…while the hive is inside your house.  While bees that are smoked are pretty mellow, they do still move around, and quite a few will escape.  If you have Junior playing around the area, or a curious cat, this will not end well.

The sealed nature of the hive will make it nearly impossible to look at your bees and see how they are doing. A tremendous number of things will kill bees:  Foulbrood. Nosema. Tracheal Mites. Varroa Mites. Hive Beetle.  And that’s just the short list!  Regular inspections are needed for the health of your hive. With this hive, that means taking the cover off the hive and removing comb with bees on it to look at it inside your home. I’m sure nothing could go wrong with that…..

The hive itself is tiny.  That means that it will probably be generating swarms on a regular basis, as the hive grows and has nowhere to expand. I’m sure your neighbors will be just fine with swarms of a thousand bees or so landing on their balconies.

A major issue for bees is regulation of temperature and humidity within their hive. If it gets too hot, they will ‘fan’ at a hive entrance to create a sort of air conditioning.  The tiny entrance to this hive means that will be impossible.  Because the hive is inside, it will be at room temperature–which may not be the temperature the bees want it at.  They also won’t get cold and slow down for winter, since the temperature will be mostly constant, and the artificial lighting of the room will mimic the long days of summer.  It’s difficult to forage for pollen and nectar in winter! 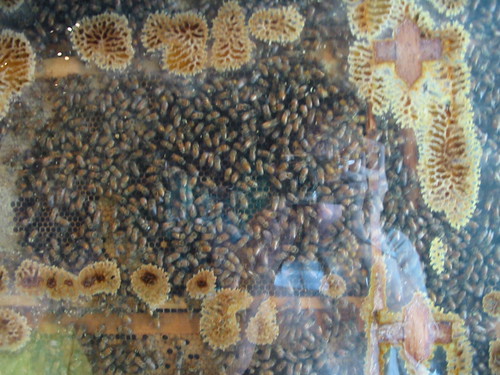 I’ll toss one more objection in to this by-no-means comprehensive list of why the hive design won’t work: bee space. That phrase will not mean much to you if you haven’t worked with bees before. Bee Space is a special measurement–3/8ths of an inch, or slightly less than one centimeter.  Anytime there is a space in a hive bigger than 3/8ths of an inch, bees will fill up the gap.

This photo shows a nice example of how bees will build additional comb to fill in gaps, or to brace comb that might be getting a little saggy because it’s full of heavy honey.  This is exactly what would happen in the “Urban Beehive”.  The second you tried to open that hive, you’d have angry bees and comb spilling out all over your floor.

I honestly don’t know if the bees would tolerate horizontal comb in the Philips design–they usually build vertically.

Having said all this: If you want to raise bees, and have your own observable bee hive, that can be done! Just not with this design.

Bees are incredibly complex animals, and you shouldn’t just decide to get a hive like you might decide to get a puppy. They need special care and feeding.   There are usually beekeeping classes offered by gardening groups, extension offices, or your local university. Setting up a hive is not cheap–take the time and invest in learning how to take care of your bees. You’ll fall in love with them once you have them.