I have been in California for most of the last week at a science conference. I love attending conferences, because I get to spend several days with friends doing nothing from dawn to dusk but talking about the cool science they are doing. And, there are side trips!

This year I eagerly signed up for a Pelagic Birding trip. I’m not a hard core birder, but I do love nature, and I have never been out on the ocean, much less look for seabirds.  The idea was a bunch of biologists would ride out on a boat to Cordell Bank National Marine Reserve, and see what was there.

Cordell Bank is an unusual upwelling created by the California Current flowing southward along the coast meeting an upwelling of cold, nutrient-rich deep ocean water.  This creates an amazing offshore biological diversity that attracts lots of birds and marine mammals. 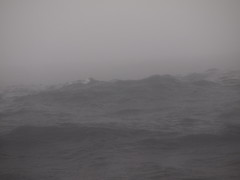 The birds we saw included Laysan Albatross, Blackfooted Albatross, 4 different kinds of storm-petrels, Fulmars, Shearwaters, Murrelets, and all sorts of other birds I had never seen before.

The Storm-petrels in particular were amazing aerialists. They fly like swallows in and between the waves.  And knowing that you are looking at tiny birds flying off the coast of California that breed in Antartica is pretty awe inspiring.

It turned out to be the most amazing birding trip I’ve ever taken, but also a hellish endurance test.  That photo at the top? That was taken after the sun was up. That was just how thick the fog was.  We spent 3 hours on very, VERY choppy seas.  I’d say about half of the people on the trip booted at least once; several folks had a permanent station leaning over the back of the boat….enriching the chum stream, so to speak.

It was, frankly, not fun. And it went on for HOURS.  And there was no escape. When you are in the middle of the ocean, being pounded by waves, you can’t just say “Hey, let’s pull off the road for a bit while I get re-combobulated.”  Nope.

We didn’t see any whales because of the fog, but we did see some white-sided dolphins, and some adorable harbor seals. And all the amazing birds.

Ultimately, it was worth it. I would probably go again, if I had the chance.

What have YOU been willing to endure to do something cool? Was it worth it? Would you do it again?