All hail the internet, which has once again delivered something strange and wonderful to my virtual doorstep: 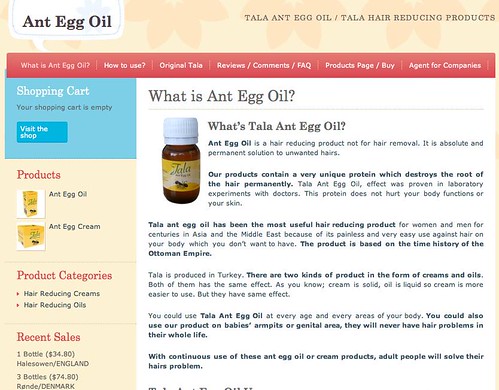 It is, as best I can tell, a traditional hair removal remedy from the middle east–Iran and Turkey, specifically.

You get all the common pitches in the marketing playbook:

Of course, what exactly the doctors were actually experimenting with or about, who knows.  My experiment on human subjects with this product produced a nearly 100% response rate of “WTF.”  And I just showed them a picture.

We also can be sure it’s safe, because it’s:

Of course, it’s actually “100% natural ANT EGG OIL, but hey, it’s natural so it must be safe!  Like…Hemlock! Or tetrodotoxin!

You are also warned to beware of substitutes:

“There are lots of fake ant egg oil products so you should buy original Tala Ant Egg Oil.”

Also, this is probably my most favoritest FAQ on the internet:

Here is the thing that is marketing genius.  The way this stuff works? You remove all your hair FIRST.  Then you put the ant egg oil on and massage it in for about 10 minutes.  So, basically:

1. Shave or wax all your hair off
2. Apply Ant Egg Oil
3. Excelsior! Enjoy not having hair!

Part of the marketing pitch is that it is safe for babies.  In fact, putting it on babies specifically to prevent growth of hair is part of how this product is promoted.  Which, I suppose, is quite effective for about 14 years.

Lest you think that I am just making fun of an internet site put up by someone whose first language is clearly not English, I want to point out this much more upscale version, that pretty much repeats all the same marketing lines, with the same lack of evidence. Although they use numbers and percentages to make it look even more sciencey!

The breakthrough GUTTO Ant Egg Oil Cream reduces the amount of hair in the applied area by 65%, delays the re-growth by 75% and weakens by 46%. It is a completely natural product found as a result of scientific and dermatological tests.

It’s fascinating that on the same page where this company claims scientific testing found the product, they also use an Appeal to Antiquity/Argumentum ad Populum by telling us this stuff is derived from “widespread traditional usage of ant egg oil of Ottoman women.”

What I really want to know, but can’t find anywhere, is information on the manufacturing. What kind of ant eggs? And how do they get the eggs???

If, indeed, their claim that a protein in the ant eggs destroys the root of the hair is true, you are going to need a LOT of ant eggs in order to have enough to sell in creams.  Also, in general, my experience is that ants can get quite cranky about you taking their eggs.

Of course, WHY anyone thought rubbing ant ova on their skin would reduce hair growth remains an unanswered question.