Once again, the media is going bonkers over a bee paper, and making claims way out of proportion to any actual results.  OMG RADIATIONS IN MAI BEEZ!!!

Here are some sample headlines: 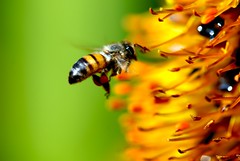 I do not know why people are so determined to prove that cellphones harm bees.

A preprint of a paper that has not yet appeared in a journal was released this week. It is a preliminary study, and reports results of a bunch of *unreplicated* experiments.
Bad. Science. Reporting.

When you look at the actual paper, you notice two things immediately:

Seriously, the words ‘die’, ‘killed’, and ‘dying’ don’t even occur in the paper.  There is one instance of the word ‘death’ and that is in a reference, not in the body of the paper.  And it doesn’t have anything to do with cell phones.

2. The design of the experiments are questionable; the results are kinda interesting, but they are not linked to CCD in any way, shape, or form.

Like earlier papers that caused a big kerfuffle in the media, when you actually examine the research you find that there are some serious methodology questions. And a lot of distortion of the results.  It’s reporting by press release.

Let’s pick this paper apart and look at why it is not the Beepocalypse that some media have claimed.

Like a paper that I criticized last year, the author put cell phones on top of an actual hive.  Most people do not stand inside–or next to–active beehives when they are chatting about what to get for dinner.  This design is rather analogous to strapping cellphones to your scrotum. Sure you’ll get an effect–but is it a real one that the average scrotum owner needs to worry about?

Even though the phones were–literally–on top of the hive, it wasn’t until they had been transmitting for over 30 minutes before an effect was recorded.  The effect was that the bees began piping (a really cool rhythmic buzzy sound).  It is true that piping bees are related to swarms; however, bees pipe for a lot of other reasons too.  If you bump into a hive, bees will pipe. It’s something they do when they are disturbed.

It’s important to note that no alteration of behavior (swarming or otherwise) other than piping was actually observed, even after 20 hours of exposure to active mobile phone headsets.  The swarming and dying part was completely made up.

The immediate critique that occurs to me is that a cell phone transmitting for over an hour will heat up.  If a hot, noisy object is on top of a bee hive, I think it is reasonable to expect the bees to react.  That effect may have no relationship with cell phone transmission or magnetic fields at all.

It is, frankly, difficult for me to say much about this paper besides negative things, because it is entirely made up of un-replicated experiments. It was a “pilot study”.  As a reviewer, I would not have approved this paper in it’s present form, simply because it is so difficult to figure out just what the methodology was!!

I can’t even say how often the piping occurred because no statistics are presented.  At the very least, I would want to see how long, on average, the phones were on and transmitting before piping began! The acoustic characteristics of the piping are described, but that doesn’t tell me anything about the relationship to phones.

The “83 experiments” number used in so many of these news stories appears to be a complete misunderstanding of what an experiment actually is. The paper did say that 80 sound recordings were made–but clearly some of those were repeated measures on the same setup.  The actual sample size was at best 12.

Bees are in trouble, but there is nothing here to indicate that your cell phone is the culprit.