Happy Valentines Day! This holiday is traditionally celebrated with a gift of plant genitalia and candy to one’s beloved.  The flowers exist to attract pollinating insects, and the candy has an insect connection you might not know about.

A common theme at my Bug Blog is that you eat insects on a regular basis.  And, frankly, that you need to get over being squicked by that.  Shellac is an insect-produced product that may be part of your Valentine’s candy (and many other things).

What is Shellac, Anyway?

Shellac is made from secretions of Laccifer lacca, the lac scale.  Scale insects look quite different from typical insects. Tiny, often with no visible legs or antennae, they kind of look like plant pimples. Like many of their relatives (mealybugs, for example), Lac scales secrete a waxy resin covering for both protection and waterproofing.  That’s what’s harvested to make shellac.

Like its distant cousin the Cochineal scale insect, Lac scales are naturally occurring insects that have been turned into a domesticated animal (and a rural industry).  Nearly all Lac scales are cultivated in Thailand and India.  There are lots of estimates of just how many people are supported by the harvest and sale of Lac; they range between 1 and 3 MILLION people, often rural groups economically disenfranchised in other ways. 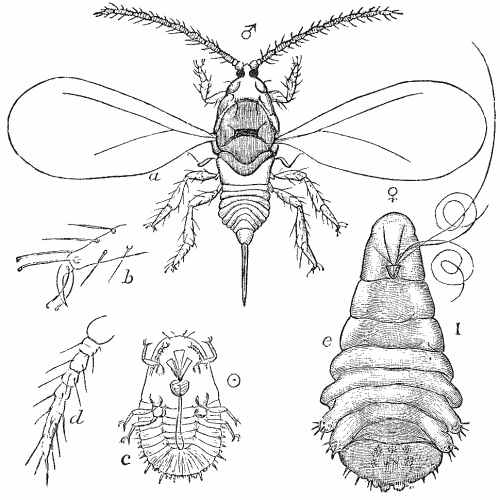 For some reason, both Cochineal and Lac scales are often reported as beetles. I’ve seen this mistake made on the Straight Dope, among other places.  Scale insects don’t undergo complete metamorphosis as a beetle would, so they don’t have larvae and pupae.

In fact, scales have their own special freaky system of growth and reproduction in which the females loose their legs and turn into a sort of tiny insect Jabba the Hutt, and even tinier males fertilize them and die.

The life cycle of the lac insect, and how shellac is made, is complex enough to deserve its own post.  I think what everyone really wants to know is:

What Kind of Stuff is made from Shellac? Is it in my food?

Most people know that Shellac is used as a furniture finish.  Audiophiles will know that the venerable vinyl LP was originally made of shellac.  As a naturally occurring resin, it has a lot of other uses.

Iowa State has a wonderful list of different products that are made partly or entirely with shellac; here’s just a few: 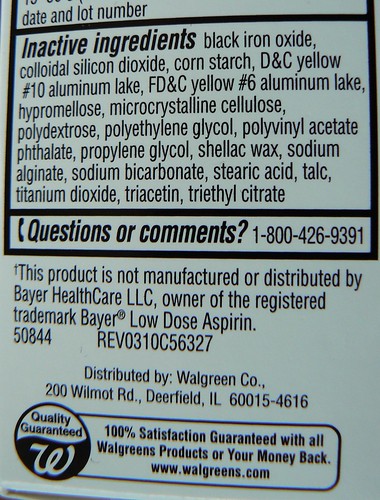 CONFECTIONARY/FOOD PRODUCTS:  Oranges, lemons and apples are coated in the producing countries by using shellac to extend the shelf life of the product and giving it a shine which other natural products cannot. Sweets are coated with shellac to achieve a high gloss and a hard surface and also for protection against moisture.

PHARMACEUTICALS: Shellac is used as a coating for tablets when a delayed dissolving in the intestine (“slow release”) is required.

I spent some time digging around the shelves of my supermarket to see if I could find foods with shellac listed as an ingredient. I failed, although I did manage to attract the attention of the store manager.  (Pro Tip: do not tell the manager of a grocery you want to take photos of insects in their food.)

The reason for my failure is simple–generally, other words are used if shellac is actually in a food or cosmetic product. 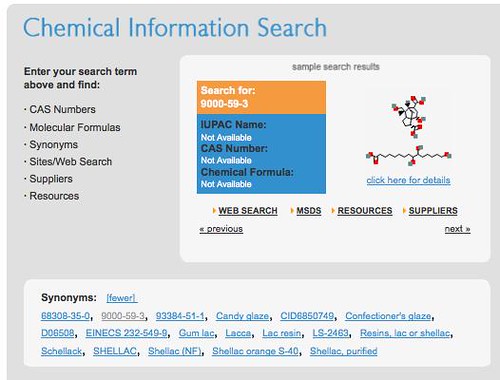 As you can see here, the words “candy glaze” or “confectioner’s glaze” can be used as approved synonyms for shellac.  “Gum Lac” is also commonly used on cosmetics labels, since it sounds less like a varnish.

If you look for those key words, you can find shellac on a lot of your foods. Junior Mints are one of my favorite shellac-coated foods; Cliff Bars also uses shellac on some of its products.

Yuck!  –  bugs in your food and eyelashes, right? Wrong!

If you look at the FDA Handbook of Food preservation, 2nd edition (2007) you can see what the primary other choice is: petroleum-based wax. Not exactly a “green” alternative.  Carnuaba wax is a plant-derived compound from Brazilian palm trees sometimes used as an alternative to shellac; it’s also used in car polish and floor wax, in addition to cosmetics and foods.

Here in the US, we eat a lot of food grown far away from where we consume it.  My two primary addictions, Coffee and Chocolate, will never be locally-sourced foods in Michigan. And so, I accept that there will be some preservatives or other additives in my chocolate.  It’s a trade-off that I accept in order to have convenient processed foods and tropical goodies.

I mean, Seriously. If you’re eating a donut or a cupcake, why the hell are you worried about a tiny amount of a compound that MIGHT have come from an insect in the sprinkles??  You know you’re eating a highly processed food that has little or no nutritional value.

Shellac is a naturally-sourced product harvested by rural folks in Asia that need the money.  The shellac refining process removes any insect parts, so you aren’t eating any bug bits.   You should, frankly, PREFER to use products with shellac. It can be grown and harvested sustainably in Asian forests.

Seek out shellac, don’t shun it! And enjoy your Valentine’s Day!

(This is a cross-posted excerpt from a longer post at the Bug Blog; slight technical difficulties delayed it until Valentine’s eve. Hopefully you’ve still been put off dinner.)