OMG. I just found a folder with a whole bunch of things I saved from the early 90s, when I was a new Assistant Professor teaching Evolution. 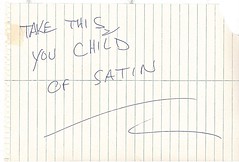 I had forgotten I was a â€œCHILD OF SATIN!â€

This, Iâ€™m sure, explains a great deal for some of you.

I am trying to remember how I got this noteâ€“I think it was under my windshield when my car was vandalized (silly meâ€“I had a Darwin Fish on it.)

Anyway, I have these amazing bluebook essays and comments from my teaching evaluations where students discuss creationism and evolution. I would love to share them, to give people a flavor of the sorts of things I run into when teaching evolution.Â  These are old enough that they probably canâ€™t be identified to any individual (and the evaluations are anonymous anyway.)