The EyjafjallajÃ¶kull volcanic eruptions are why I became a geologist. No, the recent eruptions on March 20th and April 14th did not inspire me to became a geologist. I’ve been a geologist of sorts since childhood, and I’ve studied geology formally for the past eight years. Even though I am currently studying volcanism in Iceland, I did not know much about EyjafjallajÃ¶kull before the news reports surfaced on March 20th. No, it wasn’t these recent EyjafjallajÃ¶kull eruptions that inspired me to become a geologist, but it was similar geological events- modern, historical, even ancient- that inspired me. Geology, the study of our planet, is an awesome, awe-inspiring field. Since I’m an atheist, awe-inspiring geological events are the closest I come to spirituality.

I find myself in awe that European air travel has been brought to a standstill by a relatively small plume of ash. Volcanic ash consists of small dust-like particles that eventually settle and make a thin, dark layer within an ice sheet or a series of volcanic flows. A thousand years from now, a geologist studying and dating (with her magical mass spectrometer gun) the EyjafjallajÃ¶kull ash flow from the 2010 eruptions will write in her field notebook: “this thin ash flow indicates that there was minor volcanic eruption activity in this area around 2000 +/- 50 years.”

EyjafjallajÃ¶kull is one of the smaller glaciers on Iceland and, on a geological scale, the recent eruptions are very small. Historical eruptions at places such as Mt. St. Helen’s, Krakatoa, and Pinatubo were larger by several magnitudes. Yet, small eruptions from a small volcano under a small glacier in Iceland have wreaked havoc on air travel and will undoubtedly have a large impact on the European economy (as if Iceland hasn’t done enough already, huh?). For the planet, the EyjafjallajÃ¶kull volcanic eruptions are insignificant. A little ash, a little lava, a little glacial meltwater. Nothing too significant in terms of gas or lava or water budgets for the Earth. Small eruptions barely worth mentioning in the geology books, but definitely worth mentioning in the history books. For these small eruptions are having an enormous impact on the world at the moment, even keeping Rebecca & Sid from attending NECSS!

In light of the recent geological events, I would like to quickly remind you of Louisiana governor Bobby Jindal, who criticized the $140 million given to the United States Geological Survey for volcano monitoring by saying, “Instead of monitoring volcanoes, what Congress should be monitoring is the eruption of spending in Washington.”

Booby Jindal, as I like to call him, has been widely criticized for his remarks. Sure, there are no volcanoes in Louisiana but what about Alaska, Hawaii, and the Pacific Northwest? And, as the EyjafjallajÃ¶kull eruptions demonstrate, places relatively far away from a volcano can be affected by plumes of volcanic ash. The entire globe can be affected by volcanic ash, depending on the size of the eruption.

According to a recent TIME magazine article, the estimated impact of the EyjafjallajÃ¶kull delays on the airline industry is $200 million A DAY. Which, I will point out, is more than the $140 million A YEAR for volcano monitoring which Booby criticized.

As a geologist, I am so excited about the EyjafjallajÃ¶kull eruptions and their effect on airplanes. I am awed and humbled by the power and beauty of the eruptions. A little puff of ash (okay, a 7 mile puff but still a puff) has grounded thousands of flights. There is nothing we can do about it, other than wait for EyjafjallajÃ¶kull to calm down. I am supposed to go to Switzerland and Italy in May, however. If my trip is delayed or cancelled, I suppose that EyjafjallajÃ¶kull will seem less-awesome and more annoying.

As a geologist, I find the news reports about the eruption very entertaining. Everyone wants to know when they will be able to travel. They want to know when the ash cloud will pass and air travel will be safe again. People want a volcanic weather report. And the best the geologists (and, I suppose, the Icelandic government) can do is say, “Umm… whenver the volcano decides it’s done erupting.”

Unfortunately, predicting volcanic ash clouds is not nearly as easy as predicting rain clouds. Scientists don’t really know when EyjafjallajÃ¶kull will stop erupting. Nor can they precisely predict when she (are volcanoes feminine? Sure, why not…) will erupt again nor when those eruptions will produce large plumes of ash that will disrupt air travel. Last time this particular volcano was active in the 1800s, the eruptions occurred on-and-off for two years.

Two years is a mere blip of geologic time. The volcano could just as easily erupt for five or ten years. Unlike Mt. St. Helen’s or Krakatoa, Icelandic volcanoes do not just explode once and then are finished. Icelandic volcanoes erupt over long periods of time, similar to Hawaiian volcanoes. Iceland is always erupting, somewhere. I’ll explain why in a moment.

Iceland is always erupting, but unless you are an Icelandic farmer whose farm was recently covered over by basalt, you don’t care most of the time. This is because most eruptions in Iceland do not produce significant ash clouds. The lava flows quietly (well, quietly for lava) over the surface, forming some new basaltic crust but not producing very much ash. The explosive nature of the EyjafjallajÃ¶kull eruptions is largely due the presence of this volcano under the EyjafjallajÃ¶kull glacier. The melting water from the glacier makes the eruption more explosive, since water is- after all- a volatile gas inside of lava. If EyjafjallajÃ¶kull volcano continues to erupt, the eruptions are likely to continue to be explosive and produce ash. And this could very well go on for TWO YEARS. Certainly, the ash clouds will not always affect European travel- depends on the wind direction and weather patterns. But the impact could nonetheless be significant and unpredictable.

So why are there volcanoes in Iceland anyway? In a way, all of Iceland is a volcano. All of Iceland’s crust was produced through volcanic activity. Iceland is located along the Mid-Atlantic Ridge, which is part of a global system of mid-ocean ridges where oceanic crust is produced through volcanism. There are two types of crust on the Earth: continental crust, which is older (up to 4+ billion years) and consists of various types of rocks accumulated over millions and millions of years, and oceanic crust, which is relatively young (0 – 200 million years) and more or less homogeneous. 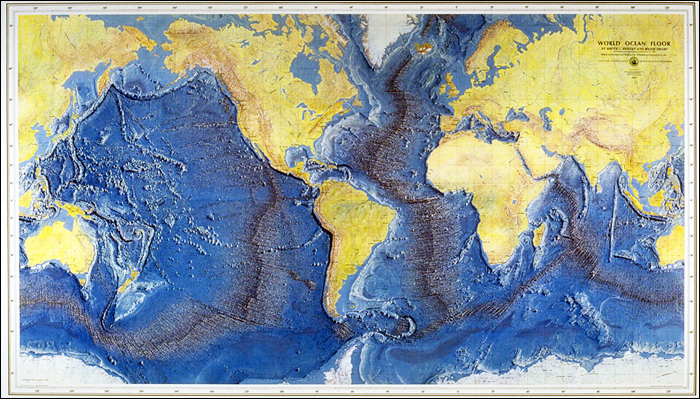 A map of the seafloor. Note the mid-ocean ridges, which are giant underwater mountain chains along which there is constantly volcanism and new ocean crust being produced. These ridges are found in every ocean basin.

Mid-ocean ridge volcanism usually occurs deep in the ocean under several km of water. Iceland is the only place in the entire world where an active mid-ocean ridge is exposed subaerially. This is AMAZING, if you think about. Iceland is a place where you can go and walk on actively-forming seafloor. Well, island-floor technically, but the volcanic processes occurring are in many ways similar to what is happening deep below the ocean on the seafloor.

Iceland is a geological anomaly. The reason the mid-ocean ridge rises above the ocean is that there is a large thermal anomaly beneath Iceland. Geophysicists have imaged a deep, hot plume of rising material directly underneath Iceland. Thus, Iceland is considered a hotspot. Hotspots are places on the planet where deep thermal anomalies create volcanism at the surface, even when there is no tectonic reason for volcanism. Volcanoes generally only occur where plates move apart (material can upwell and melt because of decompression) or where they come together (subduction of material releases volatiles, such as water, which induce melting). A common misconception (even for first-year geology students) is that rocks melt because they get hot. Actually, that’s rather rare- most of the time, rocks melt because they decompress (such as below mid-ocean ridges) or because volatiles (water, carbon dioxide) lower their melting temperatures. But at hotspots melting does occur because rocks get hot. Some places in the world, such as Hawaii and Yellowstone, volcanoes occur in the middle of plates because of deep hot anomalies in the Earth. Iceland is a place where a hotspot is located at a spreading center. Compared the surrounding parts of the Mid-Atlantic Ridge, in Iceland volcanic activity is more volumetrically abundant (because it’s hotter under Iceland) and an island has been formed.

Because of its location along the Mid-Atlantic ridge, Iceland will always erupt. The plate is spreading apart, and this leads to volcanism throughout pretty much the entire island of Iceland. The details are a little more complex- there are faults and active zones of volcanism and such– but all of Iceland is a volcano, more or less. All of Iceland was born in fire.

My research on Iceland focuses on the Northern Volcanic Zone, in particular on two rift zones named Krafla and Theistareykir (which I can pronounce poorly, unlike EyjafjallajÃ¶kull, which I cannot pronounce at all). I am actually studying cycles of glacial-postglacial volcanism. I will try to write another blog on this later this week, but what is remarkable is that there is an important link between deglaciation and volcanism in Iceland. During the last Ice Age, a ~2km thick ice sheet covered all of Iceland. That ice sheet rapidly melted ~13,000 years ago, leaving only isolated glaciers such as EyjafjallajÃ¶kull. The unloading of this ice sheet led to an up to 100 fold increase in volcanic activity. For about 2,000 years, eruption rates in Iceland were up to 100 times greater than they are today!

Just imagine if there were airplanes 13,000 years ago. That would be a large number of European flights cancelled.

I’ll write more (soon!) about the possible links between deglaciation and volcanism in Iceland and other places, since it’s something that has been in the science news recently.