I think TAM London can be best summed up by the final night, just after I finished The Amaz!ng Panel with George Hrab, Tim Farley, Neil Denny, Andy Lewis, and Martin Robbins. As people were leaving the venue and heading out to the bar, I asked fellow Skepchick Tracy King if I could have the last caramel KitKat at the concessions stand. You see, we don’t have caramel KitKats in the US and so I was desperate to try this delicious chimera. She said no because she wanted it.

So pretty much the whole event was awful. 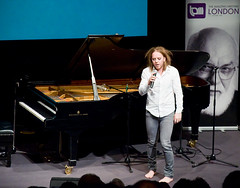 Just kidding! It was fabulousâ€”so fabulous that I can’t wait to see what Tracy and the JREF are able to do next year when things get bigger and better. The speakers were wonderful, with standout performances like Tim Minchin playing a few songs on a gorgeous piano and giving a sneak preview of his upcoming short movie Storm. Brian Cox delivered a smart (but not so smart it left us non-physicists behind) talk on the CERN and the beauty of the universe, and Jon Ronson spoke about his experiences researching his book The Men Who Stare at Goats, soon to be a giant hit of a movie. Richard Wiseman held the entire show together with his usual level of hilarity and magical awesomeness. Robin Ince delivered a bonus night of music and comedy that knocked my socks off, seeing as he managed to convince nearly the entire audience to hang out from 9am until 11pm.

If I had one regret, it was that I didn’t have a lot of time to hang with other delegates. I spent a lot of the weekend helping out behind the scenes, traveling back and forth, and being really exhausted while dealing with a sore throat. Everyone I met was lovely, and I wish I’d had the energy to talk more. Next year, I won’t have just completed a trans-Atlantic move, so I should be a bit more chipper. 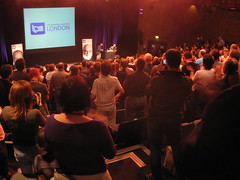 One of my highlights was something else that kept me busy: conducting interviews with many speakers and delegates along with my co-host Neil Denny of the Little Atoms radio show and podcast. We decided that there were so many cool people there that the best thing to do was to drag them into a tiny closet and spend a few minutes goofing around. You’ll be able to hear the results in three places: Neil’s edited audio will go on Little Atoms, my edited audio will go on The Skeptics’ Guide to the Universe, and the bawdier bits that are unfit for mainstream broadcast will be posted here on Skepchick.

Here’s a completely unedited interview between me, Neil Denny, and Tim Minchin conducted just after Tim stepped off stage (you can also find this on the Skepchick iTunes feed).