To talk about this weekend’s events at The Amaz!ng Meeting 7, I realized I’d first have to talk about The Amaz!ng Meeting 4, which occurred in Las Vegas in January of 2006. Luckily, this takes little to no effort because I already wrote about it here for Skepchick Magazine, the monthly e-zine that we produced before focusing entirely on the blog. Last night, I dug up my archived copy of that article and recreated it as a blog post, which you can find here. All the photos are the same, and the captions are now hover text.

Reading this now is pretty amusing for me, since a lot has changed in just a few years. I mention a poker-playing, whiskey-drinking roommate, who you all may know today as Sam Ogden, aka the one and only boy on Skepchick. Fellow Skepchick Evelyn is also mentioned as giving us a tour of Red Rocks. A grand total of four current Skepchick writers appear in the photos.

The reason why I bring it up now, though, is for two references to someone I met at TAM 4. The first, under the Saturday overview, is this:

And I left, by the way, at around 1 am when the party was still raging. Also, I was wearing UK skeptic Sid Rodriguesâ€™ Chuck Taylors â€” yet another example of a charitable skeptic, this time helping out a girl with cold feet who couldnâ€™t stand to wear her pink high heels a second longer.

And then at the end:

I walked into the darkened lounge. It was after midnight and they were closing down, but in Vegas apparently you can just go wherever you want no matter what. As I walked past the bar to the tables in the back next to the giant glass doors that overlooked the pool, I saw that there was one other person there. Sid, who had so graciously given me his shoes a few nights ago, sat alone smoking a cigarette and enjoying a beer. At this point, as I settled in next to him to just be quiet and stare out the windows, I realized my favorite aspect of TAM. Somehow, wherever you go, youâ€™re not alone. In a vast world that seems so fraught with misinformation and superstition, we collect in this basin of sin and false promises and we make it our own. We overrun the bars and the elevators and the poker tables and pretend for a weekend that we live in a world of logic and intellect.

Sid and I talked a while, and decided that we should get married next year in Vegas, at TAM 5. He folded me an engagement ring out of a ten dollar bill and told me he didnâ€™t mind if I hocked it the next morning for some breakfast (I was bluffing, I wouldnâ€™t dare).

So if youâ€™re interested, youâ€™re all invited to the wedding. I was thinking weâ€™d have Randi perform it, maybe in an Elvis get-up. I havenâ€™t run this past Randi yet, but I think itâ€™s right up his alley. After all, what else are we going to do to top this year?

(And the caption under the photo [at right] was “My sort of fiance and I.”)

Well, as many of you now know, Sid and I didn’t get married at TAM 5 but we did just get married at TAM 7, and Randi didn’t perform it but he did witness it. I can’t think of a better way to celebrate our bizarre, improbable love than to surprise the 1,000 attendees of the skeptic conference where we first met. Luckily, the attendees (and those watching the live stream online) seemed to get a huge kick out of it. Also, a lot of people seemed curious as to what actually went down, what work went into it, and whether it was for real. I was going to allow the mystery to persist, but I really wanted to publicly thank those who made this very public event a success. So, here are my thank yous, which should spell out a little of the backstory. 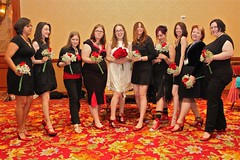 The Skepchick Team. When I mentioned to them last month that Sid and I were thinking of getting hitched, the email-version of “squeeeeeeeeee” was launched. They all made a serious effort to get there, with Tracy flying from London, Amanda from Maine, Jen taking a late-night plane on Friday just to wake up early the next day, and Karen enthusiastically joining in even though she’s one of our newest Skepchicks. A tore her way through red tape to fast-track a license to marry us, Maria got in touch with my mom, Elyse contacted Surly Amy to get special wedding necklaces made, Jill designed and drew gorgeous/hilarious post-wedding invitations to hand out to the crowd, Carrie cooked us all breakfast at the villa. They teamed up to brainstorm new ideas, they worked with my cousin to buy and create bouquets for everyone, they threw me a bachelorette party (with, yes, a stripper), and there was probably a crap-ton of behind-the-scenes stuff I didn’t even see. 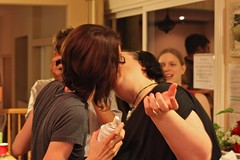 They coordinated their black outfits and red shoes, and even the Skepchicks (and SkepSam) who couldn’t make it helped out where they could. I know that Bug Girl, Sam, Chelsea, and Stacey would have been there if they could have. They all made me feel like the luckiest girl in the world. Also: let’s include the official Skepchick husbands, Tim and Christian, who were in the villa all weekend and were massively helpful at driving places (like to get marriage licenses) and keeping Sid entertained while I was subjected to a stripper.

Surly Amy, official jeweler of Skepchick. I met her for the first time at TAM7, and she was every bit as dynamic and smart as I suspected. Her husband Johnny was equally rad. I’ll stop there, because I’ll be writing more about Amy in another post . . . 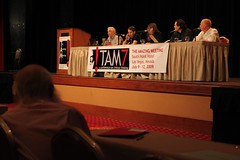 The SGU, my fellow podcasters. Steve, Evan, Jay, and Bob were so up for anything it took to make the wedding as fun as possible. We first batted around the idea of having it take place during the Q&A while we recorded a show last month, and I was blown away by how happy they were to do this.

The JREF staff, who not only pulled off a nearly flawless conference (from an audience’s and speaker’s perspective), but also went above and beyond to accommodate our ridiculous plan. My long-time friend Phil Plait was in on the wedding plans from the start and was so helpful. Bart Farkas put up with tons of lip from me, Sean McCabe is just about the smoothest mofo out there, Jeff Wagg and Rich Montalvo let us stream the show live on Saturday AND archived it so that people could watch later for free, Karl and Linda Shallenberger were a joy to see even when they were running around doing a thousand things at once. 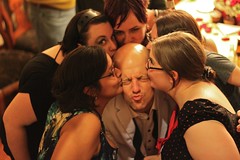 George Hrab, who I asked to participate in vague terms since at the start I had no idea how all this would go. He enthusiastically agreed and made spot-on suggestions for music he might play and what might be the funniest way for him to appear on stage. He played one of my favorite songs for our first dance (the Beach Boys’ God Only Knows) and then convinced nearly the entire TAM audience to get up and dance along, before 9am. Seriously. He is talented and charming and lovely in every way. 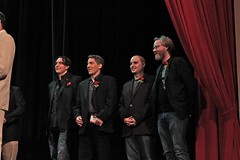 TV’s Adam Savage, who I ran into the day prior and spontaneously asked if he’d like to be in the wedding. He didn’t even hesitate. “But it’s going to be really early. Like, 8am.” “I’ll be there!” Not only did he show up and play his part beautifully, but he hung out afterward, taking photos with everyone and even signing an autograph for my cousin’s daughter. I’ve rarely met anyone so awesome and yet so down-to-earth and completely full of joy. 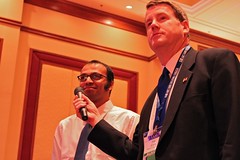 Hal Bidlack, who emceed the conference and ran the Q&A sessions for the SGU shows, which means that he was in on everything. He was uncharacteristically funny (just kidding), sweet, and supportive.

Maggie McFee, who became our go-to wedding photographer. She’s so talented, as you can see by browsing her Flickr sets here and here and here, and without her we’d have no perfectly-composed pictures of nearly naked people at the Skepchick party/wedding reception.

Tony Monje, owner of Ultimate Cupcakes in Texas. Tony didn’t know about the wedding but sent cupcakes to Vegas anyway, just because he’s awesome. We got them Friday night and shared them during the Skepchick party/reception Saturday night, adding to my mom’s cakes to equal the appropriate amount of wedding reception cake. And the reviews were totally positive! 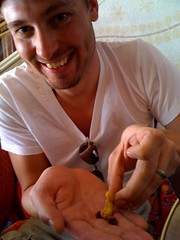 My family. Not only did my parents, brothers, sister-in-law, and cousins all fly out to Vegas on short notice, but they made the whole wedding so much cooler. My mom made a tiered wedding cake, among other things, and my cousin Pam was some kind of wedding-prep machine. All of them got along wonderfully with my friends and managed to roll with the punches on an incredibly bizarre trip. I love them, and the event was a thousand times better with them there. 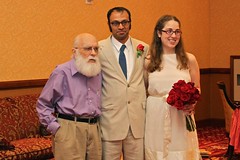 James Randi, who both Sid and I love and admire, and who we’re proud to call a friend. Obviously, if it weren’t for Randi, Sid and I never would have met and the world would be a darker place (for other reasons, as well). Randi’s energy and commitment are inspiring, and I hope to one day raise a glass with him at our 10th anniversary (at TAM 17?). 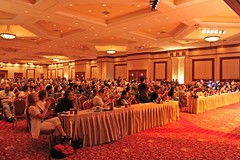 Everyone. Sid delivered a toast at the Skepchick party/reception Saturday night in which he mentioned how wonderful it was to celebrate with so many people who feel like a second family to us. There were the people we already knew, like Josh and Blake who flew out from Boston. There were all our friends from TAMs past like Kristoff, Kitty, Chip, Glenn and Lola, the Hursts, Scott Romanowski, Twylla, Simon, Paul A, the Marquis, Winslow, Mike Feldman, Tim Farley, DC, Scrut, Jonas and Mary Alice, at least three Matts, Evelyn, Jackie, Aaron, Sarah, and so many more, too many to list here and too many to even have had much time withâ€”but just seeing them all and getting hugs was enough. And there were the people we had only just met, some of whom actually got us wedding presents, and tons of whom gave us hugs, well wishes, words of wisdom, and an incredibly satisfying feeling that if just one casino in the whole world was so full of sweet, kind people, then maybe humanity has a chance after all. 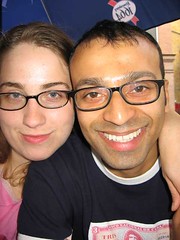 “Everyone” also includes all of you who didn’t make it, but who watched online or saw the pics or just heard it through the grapevine and sent us kind messages via email, Twitter, Facebook, smoke signals, telegraph, or psychic communication. And especially my friends Liz, Lauren, and Jared, who were watching at my apartment with Captain Infinity. Thank you!

My husband. Oh, right, I should really thank him as well. He makes my heart pound, he makes me laugh, he makes me lasagna, and he makes me a better person. I love him and I can’t wait to finally live on the same continent as him.