Kristin in Toronto recently wrote in with the following question:

. . . Anyway, the other day my hairdresser told me that she was going to start taking her 12-year-old dog to a chiropractor. “Really? They have doggy chiropractors?” I said, and she told me yes, they do, as well as doggy acupuncture and doggy naturopathy. She even suggested that I take one of my Basset Hounds, who has rather weak back legs, for an adjustment.

I later found out that one of my aunts has taken her hyperactive Bichon Frise for acupuncture as well.

I am a dog owner myself, and knowing that Rebecca and Jay are pet owners and animal lovers, I thought you might want to discuss this disturbing trend. Has alternative medicine really penetrated so far into our culture that people will pay to have their poodle’s chi aligned?

That’s a great question, and the answer is: there is no object or treatment too ridiculous or expensive for someone, somewhere to give their pet. This is better known as Watson’s Fifth Law of Human Stupidity.

It’s true that I am an animal lover, big time. If I had my way, I’d own a house in the country with dogs and cats and bunnies and horses and I’d live my life as something that might be described in a James Herriot book. Because I love animals so much, I am annoyed and incensed when they get dragged into the world of alt med quackery. This is equivalent to the idea that I love people so much that I find medical quackery to be the most distasteful of scams. 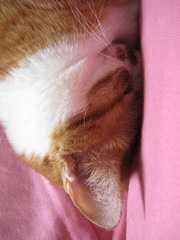 Unlike quacks who focus on people, though, the scam artists (and honestly deluded) who target animals are rarely capable of causing the same amount of damage, which is why I tend not to focus on them as much. If an animal is really very sick, say with cancer, often the best we can do is make him comfortable until the end. People with gads of money can afford treatment like chemo, but it’s tough to figure out whether or not that increases the animal’s quality of life. More credulous people with gads of money can afford things like pet psychics and energy healers — from the animal’s perspective, this isn’t much different from doing nothing and making him comfortable. Some nutball comes to the house, waves some incense around, maybe snuggles him a bit, then leaves. The human pays through the nose, but rarely would a person go bankrupt for the treatment.

Alternative treatment for pets really makes sense, when you think about it. Treatments that don’t really do anything, like reiki or homeopathy, can appear to have an effect just because the pet owner wants so badly to believe it will. Some alt med practitioners claim that homeopathy’s positive results on pets cannot be faked because the animal cannot react to a placebo, but the point they miss is that the pet owner’s faith in the treatment can result in something appearing to work that doesn’t actually work at all. “Look, Sparkles is playing with her wookie again! She hasn’t done that in weeks, so it must be the prayers of those Tibetan monks we hired!” Plus, let’s not forget the fact that animals can respond to placebo pills, when they (like humans) come to associate similar pills with healing.

Let’s take pet psychics, as well. Being a pet psychic is at least a thousand times easier than being a people-psychic. First of all, the pet cannot speak up:

PSYCHIC: She says she misses her litter mates very much.
SPARKLES: Oh, right, me? Miss those little teet-hogs? Screw you, lady.

Second of all, our pets live pretty simple lives:

PSYCHIC: Sparkles likes her chew toys, and going for walks. She likes it when you scratch behind her ears and dislikes loud thunderstorms.
SPARKLES: What about my love of 19th Century French literature?

On the topic, we recently received an email from a woman who wishes to remain anonymous, for obvious reasons. She wrote to us about Sonya Fitzpatrick, who claims to be a pet psychic:

I know this is a very late comment, but I just wanted to add that I foolishly paid Sonya $300 for one of her 1/2 hour sessions a few years ago after seeing her on the Animal Planet Show. I was desperate to see if I could get one of my dogs to stop attacking my other dog before I rehomed her. I really loved my dog, but she was literally trying to kill my other dog.

Well Sonya said they loved each other, which was about as far off as you could get. It was so ridiculous. I felt betrayed by Animal Planet for endorsing such a fake. I don’t really want my full name posted, but wanted to let you know of my experience.

Way to go, Sonya, you can’t even be a good pet psychic. Here’s an idiotic USA Today article on her written by Dennis Moore, who fails to mention this story of her giant FAIL. Dear Dennis: quit your job, go back to j-school, and learn the rudiments of good reporting. Much like Sonya, you also fail. At life.

It’s been a rather busy few weeks in terms of pet quackery, and I’ll include another related story that I’ve received from a number of you: Bubba the transgendered cat.

On the list of phrases I hadn’t ever planned to type in context, “Bubba the transgendered cat” ranks just below “Palin’s erudite answer directly addressed the question and eased the concerns of a nation.” Anyway. 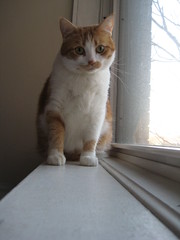 Apparently Bubba got some press recently, since his/her owner took him/her to a pet psychic, who informed the owner that Bubba was a male on the outside but a female on the inside. The psychic claimed that this was the cause of Bubba’s agitation, and not the years of abuse he/she suffered prior to arriving at a shelter. Despite the recent press, the web site that many of you sent me happens to be copyright 2006. There’s a chance that by now, Bubba may have already had his/her reassignment surgery, which means that the money sent through the “donate” link may just be going toward new, girlier cat-toys like leopard-print beds and pink leather collars. Or the money is just lining the webmaster’s pockets. Whatever!

Or, it means the entire thing was a joke that never had a punchline, but thanks to the magic of the Internet is enjoying a resurgence in interest. I highly doubt that any veterinarian would perform such a surgery — even the vets who recommend to their patients homeopathy and chiropractic treatments. Frankly, Bonsai Kitten was funnier.

When it comes down to it, the pet industry is fertile ground for scamming: people believe their pets are special, ascribe to them human-like traits they do not have, and spend enormous amounts of money on them. If ever lost my moral compass, I think I could make a pretty comfortable living off lying to pet owners. As it is, I’ll have to content myself with having integrity and spoiling my cats rotten with indulgences that actually work. Like an indoor LASER light show and a catnip-infused humidifier.

And why not: here are more pics of Dr. Calimari and Cpt. Infinity. Even cuter than a transgendered kitten.