Among science communicators, there’s an ongoing discussion on how best to reach people. There’s the Carl Sagan-route, full of awe and gentle wonder and turtlenecks, and there’s the Mythbusters-route, which relies upon explosions and goofy shenanigans to teach while entertaining. And now there is the Phil Plait-route, defined by educating the audience while scaring the pants off them. 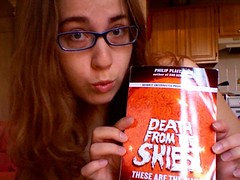 Death from the Skies: These are the Ways the World Will End is a gripping, well-written follow-up to Dr. Phil Plait’s first book, Bad Astronomy. Those of you who have read Bad Astronomy — or who follow Phil’s fantastic blog of the same name — already know what to expect in DftS, and you won’t be disappointed. Phil excels at conveying complex scientific ideas in an easy-to-grasp manner. He’s the science teacher you wish you had in high school, who can relate to your frustration when the formulas get long and the Universe seems to ignore all those laws you learned in freshman Physics.

Of course, Phil’s knack for simplifying science is only half the battle, as a wise GI Joe once said. What really sets this book apart is the brilliant concept: death and destruction on a scale that makes Godzilla v. Mothra look just silly. I mean sillier. You get my point.

The Large Hadron Collider became the biggest science news story of 2008, purely because of a public misconception that it might bring about the end times. Other popular headline-grabbers this year: the Mayan calendar ending in 2012, at least two blockbusters involving the destruction of New York, and the lack of solar activity possibly signaling an incoming mini ice age. Obviously, this is the sort of topic that grabs attention.

The problem is, how do you capitalize off of society’s innate morbid curiosity without freaking people out about scenarios that are not very likely to occur? In DftS, Phil manages to present a believable scenario of destruction and explain the science behind it, without necessarily inspiring any new doomsday cults. Take, for instance, a gamma-ray burst (GRB). This is seriously freak-tastic stuff: a star a few trillion miles from Earth, like say Eta Carinae, dies. From our perspective, we see a pretty cool flash of light in the sky, and then a few hours later, 2/3 of the Earth is covered in a lethal dose of radiation. Phil uses this scenario to explain topics like black holes and the accretion disks surrounding them, neutron stars, the weird-but-true theory that an object’s gravity increases as it gets smaller while retaining its mass, and the penetrative power of muons (hint: don’t bother hiding from them less than 2,000 feet underground). Throughout the chapter he throws in things like, “To make this more clear: we are in no danger from a GRB, Eta or otherwise, in the near or even mid-term future.” And then he continues to scare the pants off everyone by speculating further. At the very end of the book, he includes a helpful chart showing the chances of each scenario happening. Death by GRB appears to be about 1 in 14,000,000 and there’s nothing you can do to prevent it anyway, meaning that you’re quite literally better off worrying about shark attacks.

So, I love the scary parts of the book, I love the care taken to put those scary parts into perspective, and I especially love the science — speaking as someone with basically no formal science education, I learned an awful lot about astronomy, physics, chemistry, and even biology. The breadth of information in the book pretty much guarantees that everyone will learn something. Probably something really terrifying, but something.

To balance that glowing review, just in case you all think I’m only saying these nice things because Phil is my pal, I’ll also mention that the book is not perfect. Now, I did read an advance proof that may not be exactly like the final version, but I feel I should warn you just in case: Death from the Skies is absolutely infested with puns. Puns made up by Phil, and if you know Phil, you know what that means. Luckily, most of them are bolded and set apart from the rest of the text as subheads, so if you’re prepared then you will know to glance over them as you read. Here are a few:

Current Events (about magnetic fields)
Sirius Danger? (about the star, and yes, he went there)
The Hole Truth (about black holes)
I’ve Fallen and I Can’t Get Up (no, seriously)
Pasta-ta (about black hole spaghettification)
Man Hole (about Phil’s trip to his favorite dance club)

I’ll stop there before your eyes melt.

Of course, I’m only (half-) kidding. Phil’s goofy sense of humor is why I love him, and it’s why scientists and laypeople alike enjoy reading about the Universe from his perspective. His love of science is infectious, and I’m optimistic that Death from the Skies will introduce a new audience to the wonders of astronomy. I’d like to give this book to all those people fretting about the various made-up ways the world might end (the LHC, the Mayan calendar, Godzilla, Armageddon), to open their eyes to what’s actually happening out there. Reading the book, what struck me above all is not just the specifics of what we know through science, but simply that we know at all. Death from the Skies will take you trillions of years into the future and beyond, using actual science to speculate about what will happen to our planet, our Sun, our galaxy, and our Universe. That is so very cool, and so much more satisfying than anything you’ll get from the vague predictions of your average Doomsday crowd.

Bring Back Tuca and Bertie

Michael Moore’s TrumpLand, Art or Opportunity to Cash In?