Here in Boston, Anonymous has been busy spreading the truth about the dangers of disconnecting people from loved ones, denying them psychiatric treatment, and starting a religion based on bad sci-fi novels. Anon needed permits in order to conduct peaceful, law-abiding protests, so one man had to step up and put his name down on City paperwork.

His name is Gregg, and as soon as the Scientologists found out about him they enacted their Fair Game policy, which encourages them to harm opponents in any way possible. They decided to entangle him in legal proceedings in the hopes of exhausting his resources and ruining him, a common tactic on the part of the “Church” of Scientology. That’s been going on since March, and the CoS has just dumped more ludicrous charges on him: disturbing the peace and, laughably, disturbance of assembly for worship.

First of all, Gregg tells me that the last time anyone made it to court for disturbance of assembly for worship was 1806. Ha! Plus, one person on the Anon forum pointed out this article in the Boston Globe, which contains the following:

Gerard Renna, director of the Church of Scientology of Boston, said in an interview yesterday that church services were not affected by the protest. Members of the church continued to enter through the front entrance as two Boston police officers stood outside the door.

The same Anon also pointed out that there were police present at each protest, who could easily verify the simple fact that everyone was peaceful. Had anyone actually disturbed the peace, surely the police would have stopped them immediately. 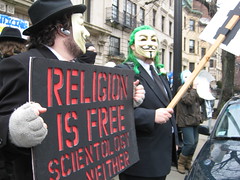 Also, I recall a local Boston radio personality who actually visited the CoS as a potential recruit while the protests were ongoing. He reported that things inside were ridiculously, eerily calm. I can’t embed YouTube at the moment but I think this is the link (I may edit later).

For now, though, common sense takes a backseat to legal proceedings. Gregg was in court yesterday, where the Scientologists told a judge that they specifically worship god as a supreme being (really? That may be news to many Scientologists) and meet every Sunday, which convinced the judge to arraign Gregg on both charges.

All of this absurdity is making Gregg pay through the nose for legal fees. If you’re interested in helping him out with those, he happens to accept PayPal at this address: [email protected]