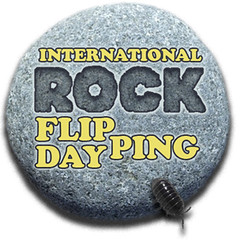 â€œYou donâ€™t have to be a blogger to participate. We encourage everyone with a Flickr account to join the International Rock-Flipping Day Group and post photos or sketches to the photo pool. Those who would prefer not to join Flickr can send images to Bev (bev AT magickcanoe DOT com) for posting in a gallery on her siteâ€¦.

Any and all forms of documentation are welcome: still photos, video, sketches, prose, or poetry. We encourage those of a scientific bent to try and identify everything they find, but weâ€™re also open to purely lyrical or impressionistic responses. Our coveted, if wholly imaginary, Grand Prizes this year will go to: 1) whoever identifies the most species under a single rock; and 2) anyone who appears to have a genuine epiphany as a result of flipping rocks.â€

â€œThe point is simply to have fun, and hopefully learn something at the same time. â€¦.But whatever you do, please be sure to replace all rocks that you flip as soon as possible, so as not to disrupt the nativesâ€™ lives unduly.â€

Minions, go Forth and Flip!