People, I am exhausted. I spent the weekend in New York, hitting Coney Island with Wendy, Eve, Waltdakind, and Goodguyseatpie, and the wedding of NYC Skeptic Matt McCarthy. Sure, it wasn’t Dragon*Con, but at least I kept busy and had a blast.

Now I’m back at work and loaded down with deadlines, a circumstance made even more tragic by the fact that my work friends all quit last week and now I get to eat lunch alone at my desk. Suffice it to say, I’m having some trouble getting my skepticism on. In search of inspiration, I turned to the in-box and found this note from Skeptics’ Guide listener Neil:

My question for you is not of a sceptical nature but I think many of your listeners can relate to my predicament. My girlfriend has recently, and for the first time, expressed a belief in woo-woo. In particular it was a belief in pseudo-scientific psychic card reading tests and a healthy fear of ghosts. Apart from this she is non-theistic but never calls shenanigans, which I do quite often. I am concerned that if I don’t reason with her the beliefs will snowball and suddenly I’ll find myself in an angel shop buying energy crystals. However, reasoning with her may shake the apple-cart as I’ll appear to be blithely shooting down her beliefs.

I realise that these are both slippery slopes and that the middle-ground is to gently sit her in front of James Randi on YouTUbe, but…

How would the SGU panel, as activist sceptics, deal with a situation like this? And have you any advice for listeners in the same situation?

Thanks for the interesting question, Neil! First, let me just say that I don’t have a lot of experience with this exact problem due to my pretty good track record of dating skeptics (probably because psychics can psychically foresee that I will dump them as soon as I find out they’re psychics). However, a lot of what applies to romantic relationships can also apply to other relationships, and so I give you these tips, which I’ve mentioned elsewhere in various forms but are collected here for your convenience:

1. Don’t Have All the Answers

I was at a bar Saturday night where my fellow skeptics told the bartender about Skepchick. The bartender then insisted upon telling me story after story about her paranormal experiences, pausing to stare and demand I give a more rational explanation for each one. Her tone was pretty aggressive. One story was about a friend of hers dying and sending her a message through the spilled wax of a candle. She said, “Tell me how else you can explain that.”

I pointed out that there’s just no way I could ever know what happened, much less give her an explanation that would satisfy her, since I wasn’t there. I explained that when I say I don’t believe in ghosts or psychics, I mean that I have yet to see any evidence to suggest otherwise, and that every story I’ve come across that sounds convincing at first has become a lot less convincing the more it is investigated. Extraordinary claims require extraordinary evidence, and unfortunately an anecdote told over a bar just won’t be enough to overcome mountains of evidence suggesting there’s no such thing as the paranormal.

When you have the courage to admit you don’t know the answers for sure, you can worry less about angering someone. You’re no longer shooting down their beliefs — you’re taking them on an investigation where you both learn together.

2. Do Have a Sense of Humor 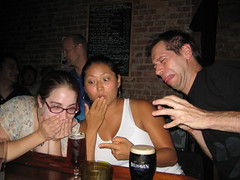 The number one way to convince someone that you’re not just being a cynical jerkhole (sidenote: Firefox recognizes “jerkhole” as a properly spelled word) is to not take yourself too seriously. Laugh at yourself, and earn bonus points if you can make her laugh, too. My conversation with the bartender got a whole lot better when I switched it to talking about good (and fun) science, like Richard Wiseman’s search for the world’s funniest joke. That got us all telling really, really bad jokes and laughing like idiots, and it got my bartender to relax a bit. When she felt like I may be challenging her beliefs or telling her she’s a loon, she was more on edge and ready to (verbally) fight it out. When she was laughing and realizing that I’m just interested in talking about things, she was back to being a fun, easy-going girl who was pouring me more delicious, delicious beer.

You won’t convince a person of much of anything over the course of one conversation. When you’ve both had your say, try telling her you’ll send her some links to back up some of the things you were talking about. That could be a link to a Skepchick article, a Captain Disillusion video, or whatever. Then, drop it. The skeptical talk didn’t go on all night at the bar Saturday — eventually we all just laughed it off and changed topics. If I were to run into that bartender another day, I bet she’d be willing to chat again because our talk about skepticism was just one chunk of a larger conversation that was rather enjoyable. Another chance to talk is another chance to impart some critical thinking lessons. In your case, Neil, it might be another chance to get some nookie, which is important in a relationship.

Look, you gotta be you, so don’t drop it forever. If you start avoiding issues that you find interesting just because your friend or lover is a believer, you’re going to be miserable and you’re going to end up hating her, and she’s not even going to realize why. Instead, learn more about her particular belief. Read the studies, and if you can, do some simple tests yourself. Include her and talk about the results. Give her the skeptical ammo she needs, and you may be pleasantly surprised when one day she shoots down a crackpot theory on her own.

So Neil, I hope that helps. Anyone else out there have experience dating someone with a weird belief? Let us know how you deal by commenting below!