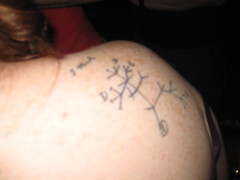 I arrived in Vegas last night around 12:30am PT on a late flight that I liked calling “The Plane of Misfit Toys.” There were about four babies, one dog, and 18 old people needing wheelchairs and early boarding. The woman next to me had a cough that sounded like she was an extra in The Stand. The man immediately in front of me was so drunk he was talking to himself during most of the flight. He had to be reminded twice that the tray table was not a footrest. As we were taxiing in Boston, we pulled around to see the moon, large and beautiful and full and a deep orange color hanging just above the horizon. “Well,” the drunk said matter-of-factly, “there’s the sun.”

So anyway, as soon as I got to the Strip I went to the Flamingo’s main bar, and sure enough there were about 30 skeptics hanging out having a good time. I saw A and Teek and Sam and Masala_Skeptic, so the skepchicks are already in full force. Someone bought me a lot of drinks (mostly A, I think). At one point my friend Simon called one of those girls with a card handed out on the Strip to ask how much it would cost for her to do something completely unspeakable (in polite company) to him. I don’t think he got through.

And that’s it. I went to bed around 3 or 4am, and now I need pancakes. Mmmmm pancakes. I uploaded some pics already. The one above is a shot of my friend Lola’s Darwin tattoo. Rawk.

Sorry, nothing particularly skeptical happened today but I wanted everyone to know I made it, alive.

PS, my white linen pants are totally see-through. If you see me, please act as though they are not. Thank you.